When there’s a will, there’s a way. And even though technically Netflix isn’t available outside America, there’s certainly a way.

We’ve technically covered ground on how to access blocked content by using a virtual private network already. But by taking it one step further, entertainment on-demand is at your fingertips. Once you’ve figured out a provider right for you, you’ll need to connect to a U.S. server (this is crucial) and then log on to Netflix. 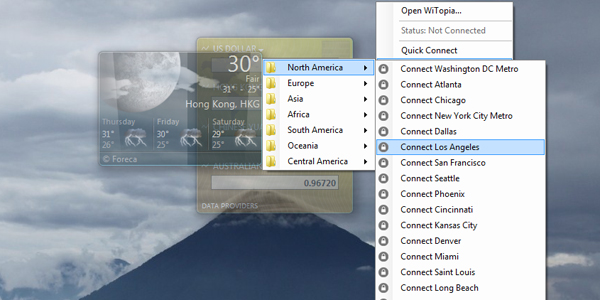 Providing that you also have a Netflix subscription (they’re not free!), you’ll have full access to your queue. The same thing also works for Hulu or BBC Player. However, it all really depends on the speed of your Internet connection. Coming from super-connected Korea? Anthony Bourdain in HD. Dial-up in Africa? Well, I guess I wouldn’t be expecting much.

Not to be biased, but I’m definitely a fan of WiTopia, having lived out in the wildskirts of mainland China. That is, of course, not the only viable option, but if I can get my dose of Youtubin’ and twittering behind one of the most censored places on this Earth, you’ve brought true joy into my life. The service also offers a range of flexibility and servers to pick and choose from.

As a thanks to our crazy jetsetting readers, we’ve created an exclusive WiTopia discount code for new subscribers (10% off), which expires at the end of this month on May 31st. The code is maphappy. You can sign up right here.

Do me a favor while you’re at it. Say yes to Downton Abbey.