You probably don’t care about the cost of living in other countries — you just want to know how expensive things are so you can budget for your trip. Oh, right!

So if you’re looking for a quick point of reference, cost-of-living analyzer Expatistan is a pretty handy resource for figuring out how much a meal costs in the business district of New York City versus Buenos Aires (New York City is 56% more expensive, while food in general is 64% more expensive).

In this case, if you were budgeting a trip to Buenos Aires from New York City, it should be reasonable to slash your normal food budget in half to get the kind of standard you’re used to getting in the Big Apple. Same goes for transportation and entertainment — all things that you’ll probably encounter on your trip. When in Rome, pay Roman prices. 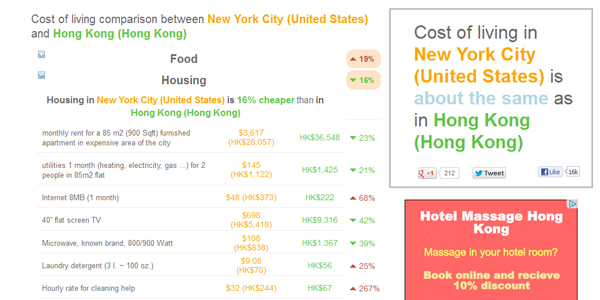 The whole site is user-contributed, so it is only really as good as the people who plug in prices for various things. It does seem to get some love — and it is still a heck of a lot better than figuring these things out by setting off with a calculator and familiarizing yourself with the Big Mac Index.