When my Vapur Eclipse broke earlier this year, I was devastated. It was time to look for a collapsible water bottle alternative. Though the Platypus PlusBottle is fine, I still think there are better products out there on the market.

There wasn’t much reason not to try it. The 1-liter Platypus PlusBottle stands at 11.5 inches (30 cm) tall by 6 inches (15.5 cm) wide. It’s also pretty light, weighing in at 1.3 ounces (38 grams). The material is made of some type of special plastic blend (“polyurethane” and “polyethlene”). The dimensions are slightly bigger than the Vapur Eclipse but the bottle is also lighter with a .2 ounce difference. I suspect if you stacked up both products side by side, the actual specs between both products are quite minute.

(I should point out I no longer have the Vapur Eclipse; I threw it away in a fit of rage when I discovered a busted seam in the side of the Vapur. What kind of water bottle decides to break on the very same day I set off for a trek into the Andes?!?! That’s not something a girl forgets easily: I ended up having to carry several packs of potable water with me into the mountains.)

The Platypus PlusBottle costs $16.15 through Amazon while the Platypus Drink Tube Kit costs $12.95. I should be clear though that I’m evaluating this bottle on its own because I’m against spending more money just to make a product more functional, even if I received a courtesy sample. I suspect the PlusBottle in conjunction with the hydration kit might be awesome for those who are serious mountain bikers but I’m not one of those. I don’t climb that much to make the hydration kit worth it; I’m just a hardcore traveler that wants to get as much function as in as little space possible traveling from airport to airport, while doing the occasional climb.

There are a few key structural differences to the Platypus PlusBottle compared to the previous Vapur bottles I reviewed. Immediately, the two things that caught my attention was the fact that the PlusBottle doesn’t have a flip-top cap and, second, there was no integrated carabiner on the PlusBottle. I was willing to deal with this because I still wanted to hate the Vapur Eclipse after it broke.

But after a while, having a separate cap to look after immediately proved to be bothersome. Though I had complained that it wasn’t possible to get a large amount of liquid into the Vapur because of its small mouthpiece, I eventually realized that the cap was screwable and came off like the blonde I am. I’m also prone to losing things so the thought of having to deal with and look after a screw-top lid was worrisome. This bothered me even when I was doing something innocuous like dig around for it in the dish rack.

UPDATE: A spokeswoman for the company informed me that there are actually two types of lids for the Platypus PlusBottle. The other version comes with a push-pull lid, which is probably the preferable product. My only issue is with this is that it doesn’t solve the problem of the extra loose plastic cap designed to keep the lid clean. I’m still probably going to lose that. 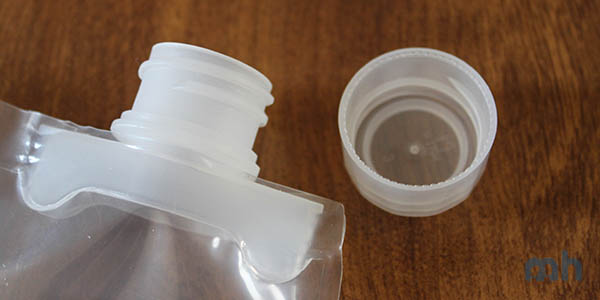 Though the PlusBottle is portable and deflates to a flat pouch once it is devoid of liquid, there’s no denying the fact that it’s simply less useful than the Vapur Eclipse or Eclipse. One of the key benefits of the Vapur products was that it was often possible to roll the bottle up to reduce its footprint and then secure this into position with the attached carabiner. This is just not possible with the Platypus without an additional accessory.

The lack of carabiner also made it difficult to attach the water bottle to other objects. I often clasped my Vapur Eclipse to my portable REI day bag because sometimes I didn’t want to worry about the bottle accidentally tumbling out of the bag. Though it’s not necessarily such a big deal if you’re just trekking around town, it was great for those moments I was out doing major physical outdoor activities, like scaling up boulders in Colombia. That’s not possible with the Platypus PlusBottle.

On some of the other metrics I used to evaluate the Vapur Eclipse, the PlusBottle fared about the same and didn’t leak a single drop of water through all the tests. Most of the real issues it ran into are problems that accompany all collapsible water bottles. I don’t think it’s possible for a plastic flat liquid pouch to dry completely inside because of the nature of the design. This was true of the Platypus: I could have left it out for days and it still wouldn’t happen. (Pockets of moisture inevitably get trapped inside.)

Putting in hot boiled water into the PlusBottle is not something we’d suggest; it’s not even something we’d recommend with other portable water bottles we’ve tested. While I was able to fill it up with hot water without melting the structure, the main problem is that the pouch becomes too hot to touch. Given its propensity to withstand high temperatures, it should come as no surprise the bottle is dishwasher-safe. Not unlike the Eclipse, the pouch can stand on its own two feet when filled up without a problem.

Though the Platypus PlusBottle comes with a limited warranty, it’s performed fine and hasn’t broken on me. But then again, I’ve only had it for a short amount of time, about a couple of months. The editors at Outdoor Gear Lab did note that after they put heavy stress on the bottle for a year and a half, the bottle eventually began to leak in certain spots so that’s something worth thinking about.

There’s nothing wrong with the Platypus PlusBottle — I just didn’t think it was great. Specifically, I wanted it to surpass the expectations the Vapur Eclipse had set. However, given the feature set between the two bottles, I think I’m going to have to defer to the latter. I realize perhaps the real reason why I was so upset in the first place was because I actually had begun to rely on the Vapur Eclipse. I’m still willing to purchase another Vapur but this time I guess I’ll just cross my fingers and hope the last time it broke was a freak accident.