Kickass travel photos with learning the basic elements of a photo and how to compose one. If you’ve been centering the main objects in each photo, STOP.

The rule of thirds is a basic guideline for composing any type of visual image, whether that’s a photo, painting or even a movie. It says that an image is divided into thirds both horizontally and vertically and that the most important element of the photo is placed along where these lines occur or intersect. This arguably creates a lot more “interest” in the subject of the photo, though it’s not a hard and fast rule. However, it is not a horrible framework to start with if you’re just getting into photography.

But hey! If you want the fast food version of that, photographer Jayne Whitelock also explains it all on video. Plus he’s channeling so much Peter Jackson I just can’t get over it.

Is there any chance he’s in the Shire, do you think?

The rule of thirds is something that you’ll often have to imagine in your own little head when shooting a photo—there’s no nifty camera feature for that—but it’s not hard to do. The other option is to do some post-editing for the rule of thirds in Photoshop but I like to do most of the legwork upfront so that I can spend very little time editing afterwards.

To illustrate how this affects the composition of a photo, I’ve grabbed this photo of a woman in Chennai from Vinod Velayudhan. The featured photo for this post showcases Vinod’s original perspective. But below, we have a version of it where he ignores the rule of thirds and decides to center the photo: 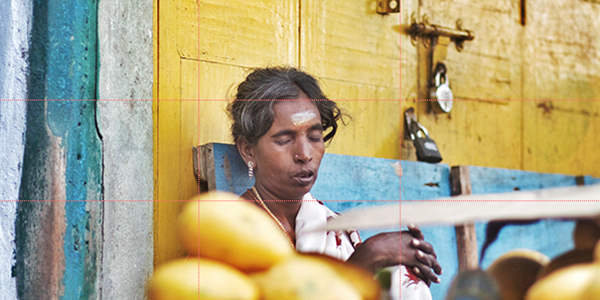 However, once we decide to use the rule of thirds as a guideline, the composition changes entirely. Here’s that same exact photo but edited to make sure it follows the rule. 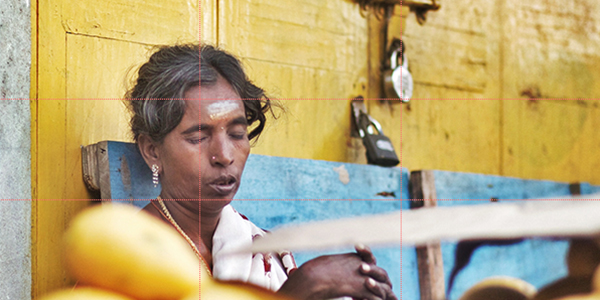 Rule of thirds applied to photo.

I much prefer the second photo because it puts the subject front and center (not literally) and all of a sudden, I’m just so much more interested in her as a personal subject.

There’s really no one standing over your shoulder making sure you implement good photography techniques on your trip if you want to rebel, but it’s almost certainly never a bad idea to have a grasp of the basics to fallback on.