If the bag “fits” in the overhead compartment, then it’s good to go as a carry-on is what I always thought. I had one reliable rollerboard suitcase that worked for all my flights in and around the U.S., even on domestic flights when the overhead space was never as roomy as international flights.

Most airlines technically (and understandably) have weight limits on all luggage items, including what’s taken onto the plane. In all my flying, it’s seemed like that major airlines in the U.S. don’t care all that much about it, though. For regional airlines abroad, I’ve found agents can be sticklers for it and it’s often not much weight leeway at all.

It isn’t just enough to show my bag is the proper size for the ticketing agent to let me roll on toward my flight. For many regional airlines and flights, there is a strict weight limit to carry-on luggage and anything over that needs to be checked. And you can bet they weigh these things.

I flew GOL Airlines from Buenos Aires to Rio and was told the size of my bag was fine but it clocked in way over what was permissible weight-wise: a measly 11 pounds. My carry on bag needed to go on a diet in order to be allowed on. Since I like to carry on as often as possible, this was a disappointment. (That said, the bag I tote around in day-to-day life probably weighs more than what was allowed on board.)

Even airlines in the US are clamping down on what they allow on board, too, shrinking size allowances and becoming more watchful, says USA Today. Err on the side of being too small.

Here is a a handy chart from Skyscanner with baggage size restrictions and weight allowances for European airlines: 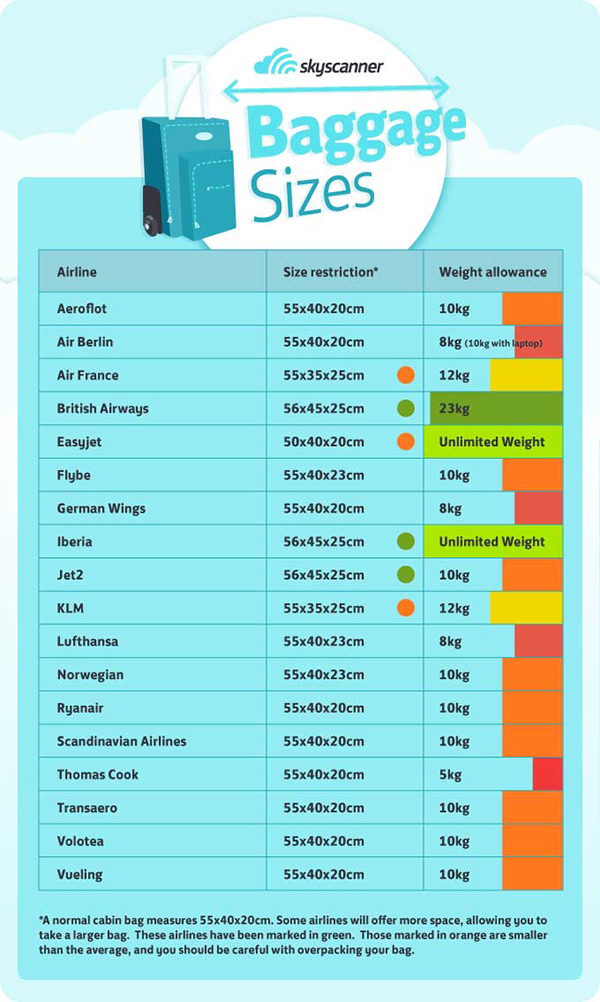 It’s just not limited to the Euros, either. For instance, AirAsia—arguably the most prolific budget airline throughout all of Asia—also enforces a weight limit at 7 kg (15.4 pounds) per carry-on.

Every airline is different, though, and the limits seem to constantly change, especially as more and more airlines move toward charging fees for checked baggage. For regional airlines, I now always check and know my limits when it comes to carry-on baggage. There are some things worth being paranoid about.