I’ll never forget my first introduction to airport lounges. I was discreetly loitering outside a lounge that had wide-open Wi-Fi, hoping the hours would pass quickly. One frequent flyer on the way out of the lounge called me out on my sad, sad game plan and decided I couldn’t do that, instead generously checking me into the lounge before going to catch a flight.

The lounge was an oasis compared with frenzy and fluorescent lights of the terminal outside. I could spread out. I could snack to my heart’s delight. And I could shower! I never looked at long airport layovers the same again.

The LoungeBuddy app finds airport lounges based on your trip itineraries and current location, peeping them with ratings, reviews and photos other users have uploaded. It’s also possible to book pay-for-lounge spots and pay for it all right in the app. Better yet, it’s available for free on iTunes and the Google Play store.

There’s a couple ways to get set up but one of the main facets of LoungeBuddy is that it’s really based on setting up an account. That’s because it stores any airline or military status (even arcane ones like Lounge Club, Priority Pass and Regus Businessworld Gold) and any credit cards that enable lounge access. Most frequent flyers are bound to have more than one way to access lounges so it’s great that it collates everything into one spot. It even goes so far as to sync Concur trip itineraries if you have an account, though there is no way to sync with TripIt or WorldMate yet. (Boo.)

OK, I gleaned, if I load my personal information and trip information, the app should do the rest, right? It should also tell me what lounges I can enter or what I have to pay for, too? The service stores a database of more than 600 airports and 2,000 lounges internationally and I decided to put it to the test creating an upcoming itinerary that crossed hemispheres as well as the U.S.

Like most apps these days, the interface is unsurprisingly intuitive for the most part. Using the geolocation or GPS features on the device, it’ll start with the nearest airport and give users the option to take a digital cruise through the nearest airport lounge offerings. Though that’s the default setting, it’s possible to start with any airport or to create a new trip. Like we’ve just mentioned, there’s the option to pull from Concur if that’s already a service that you use.

Unfortunately, I don’t, so I set to work creating my trip. First click was the departure airport and the plus sign next to it prompted me to add the airline and class I would be flying that leg. An arrow then led me to add the arrival airport. This could be continued for as many legs as desired. In practice, this can be pretty cumbersome if there’s lots of flights to add. My only request? If LoungeBuddy could take it the next level and include some of the more other popular trip management services like TripIt and TripCase in the near future. 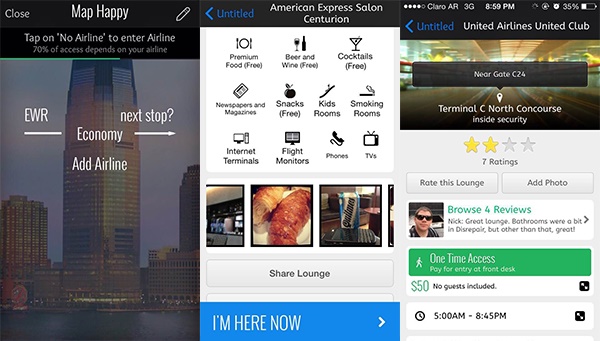 Scrolling between the different airports will enable users to see what lounges each housed. Based on the itinerary and my profile information, the app very clearly delineates what’s accessible and, if relevant, each lounge’s entry fee, and the terminal it is in. It also listed inaccessible lounges just so, as “inaccessible.” Oh, what a tease — and further inspiration to get me some good status.

In short, each lounge is profiled with reviews and the key information. Must-know deets include lounge hours, amenities offered (very important!) such as conference rooms, Wi-Fi, cocktails, showers and flight monitors, including mentions of which were free.

But since this is the Yelp of airport lounges, it’s pretty much all about the reviews and making sure you’re in the nicest lounge possible when you’re on the go. Instead of having to dig through FlyerTalk about the best lounge to hang out while I’m in Copenhagen before my flight, LoungeBuddy allows a cursory look into how each lounge fares on a whim. Users can post reviews with ratings, text and photo uploads. In all the lounges I toured I didn’t see reviews numbering more than 20 but it was still a decent feel for each.

The app also has a weird social element to it, too, allowing users to add a profile photo, Twitter handle and biography. Echoing every reality TV show villain ever though, I wasn’t in it much to make friends, so I left that information empty — at least for now. I just wanted to find the best place to splay out on a layover.

In fact, the app is for everyone: I didn’t need super elite status or an exclusive credit card to feel like the app served a purpose for me. All I needed was a travel itinerary and it presented all the possible ways to access those closed doors. Perfect for making the stress-addled airport experience that much easier, more relaxed and all-around better by helping get people to a place that’s a bubble from the airport hullabaloo — their bubble.

Get $10 credit in LoungeBuddy with our referral code: PCnr0MMIEB. And don’t forget, with every person you refer to LoungeBuddy you receive $10 credit as well.