Map Happy » Transit » Flights » Airlines » What Does It Take To Be a Favorite Airline?

It’s the little things that matter when it comes to winning over customers’ loyalties to become a favorite airline. Like a serving of Häagen-Dazs ice cream.

Flying is the great equalizer. Unless I shell out big bucks (I’m still waiting on big bucks to shell out), I never expect my flight experience to be particularly pleasant. Anything above “being punished for wanting to travel” will do.

But then there are those special touches that make a difference. It’s an amalgam of perks, benefits and small comforts that can turn an average flight into a great one—especially when flying on a budget. Here are some ways that airlines enhance the experience.

Chug! Chug! I love a varied menu almost as much as I hate paying for things.

Airlines that offer free alcohol are great, especially when there are free snacks thrown my way too. Lay down stroopwafel and I’m a happy fat kid again. Let’s hope United set a precedent by reintroducing the free snack game to economy. I want a future where airlines vie for my business by flashing me their stash of Cape Cod potato chips.

I should also say that the typical flight cabin is as dry as the Gobi, and alcohol hastens dehydration. Soooo drink extra responsibly.

I’ve heard legends of a time many moons ago when checked baggage fees were unimaginable. Things certainly change. The only major airline that waives baggage fees (on the first two bags, no less! ) for all passengers is Southwest. Other than that, the only way to get free bags is through elite status or with the use of certain credit cards. Both are nice, though not accessible to everyone.

It would be nice to think that bringing things I need on a trip wasn’t an inconvenience to airlines. I’m interested to see what happens if fuel costs stay low—will airlines loosen up on the baggage charges to spur some competition? Given the ubiquity of baggage fees, I’d say no. But there is always hope.

Flying means ditching the comforts of home for something more… cramped. As airplane seats continue to shrink, it becomes tougher and tougher to feel genuinely comfy (especially for the broad shouldered and barrel chested among us). That doesn’t mean all hope is lost.

There are some airlines that still provide passengers blankets and pillows on long haul flights—United and Virgin do. And while they may not be the most luxurious items, or even the most appreciated, they’re a nice touch. I can at least remember what being comfortable was like.

Perhaps the most germophobic out there would bring their own. Here it’s really the thought that counts.

It was a flight from Reykjavík to Boston that made me realize how wonderful lighting can be. It’s a quick and easy way to soothe passengers. And to help them forget they’re careening at hundreds of miles an hour in a tube thousands of feet above the earth.

On Icelandair, the overhead bins were magically illuminated like the northern lights. Did it make me more comfortable? Kinda. Did it make the flight feel shorter? Nah. Did it look sick as hell? You bet.

Virgin Airways is another provider well known for its sexy, multi-colored mood lighting. Amber glow at dinner time? Yes, please. Some airlines are even experimenting with lighting techniques to ease the transition from night to day. Why be jarred awake by obnoxious fluorescence when you can be gently eased out of slumber? Lovely.

No word on whether airlines are working to play birdsong over the speaker system, but I’d like to wait on that. 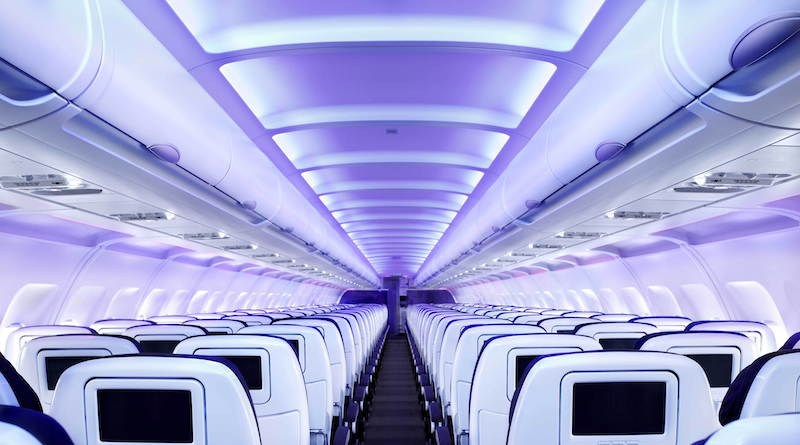 Björk and A Fish Called Wanda

My first exposure to personal in-flight entertainment was on JetBlue back in 2007. I watched six episodes of “America’s Next Top Model, Cycle 6,” and never looked back. It’s not just about the screen itself, but what’s offered. If it’s just full seasons of CBS shows, I’m out—even if it’s free. I’d rather read a book at that point.

I appreciate airlines with a wide variety of content offerings. It allows me to bounce around from movie, to documentary, to TV show, and back again. My flights on Icelandair this past summer were perfect for my erratic viewing style. En route back to Boston, I switched between “BjöRk: Biophilia Live,” “A Fish Called Wanda,” and an Eyjafjallajökull documentary, all while playing a rousing game of Hearts on my phone.

Here‘s a list of the top airlines in terms of entertainment. A good media experience can make all the inconveniences and discomforts of flying float away. I’m even willing to be stacked on top of other passengers if the entertainment selection is good enough.

I’ll be the first to admit my mind starts to go if I’m without Wi-Fi for more than two hours. This is why I’m always willing to spend a bit of cash to have Internet access on my flight.

I don’t expect to be able to stream an HD movie (yet… though I do have hope for the the future), but I at least look for Wi-Fi with speeds that don’t seem like they’re trying to punish me. There’s no point if I can’t at least check my email and the BBC (read: check Tumblr and Instagram).

There has been a good deal of buzz about the next generation of in-flight Wi-Fi. 70 Mbps? Sounds like a dream come true. Average Wi-Fi speeds will become a serious contender when selecting an airline in the future (after cost, of course).

Did I miss anything? What do you think? Let us know what airline perks really sell you on flying.