This sponsored post is brought to you by AirHelp.

Imagine a service that automatically tells you all the delayed compensation you’re entitled to, without lifting a finger.*

There are a lot of great services that should be in any traveler’s arsenal, and AirHelp deserves a worthy spot on the list, since its new feature will automatically check that travelers are properly compensated for any delayed flights over the past three years. Just because the trip ended, it doesn’t mean there aren’t things to follow up on.

There are a few caveats. The limits for compensation range up to €600/$700 USD. The delayed compensation limits are also limited to EU flights, wherein the typical EU passenger protections lie.

*I might have lied. There’s a few finger click-strokes involved. (But it mostly involves connecting an e-mail account. None of that tedious flight-by-flight import one-by-one business.)

Life before the internet. Thankfully, like most web services these days, everything is set up in a user-friendly interface which only requires a couple of connects.

AirHelp’s new feature does require user permission to bulk import every flight you’ve taken within the past three years (this is the expiry limit on recouping compensation). The supported email services include Gmail, Hotmail and Outlook.

I’m not passing judgment on anyone that still has a Hotmail account. Different strokes for different folks, equal opportunity here, all that jazz.

Once that’s done, AirHelp will send a final confirmation notifying travelers that all available flights have been imported.

For more pictures of the setup process, see the screenshots:

Once the map is generated, it’ll display a bunch of stats (much like what TripIt and WorldMate used to display).

But because I am le super competitive person, you can bet I’m gonna link my personal account, because like, duh, work travel is not the same as personal travel, plus I want every single possible dollar I can get back. 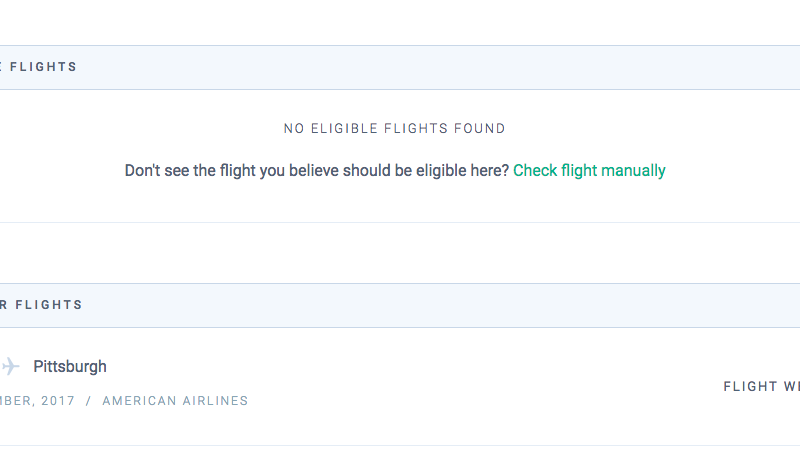 I wish more of my flights had been delayed.

Downside of a semi-charmed kind of traveling life, right?

Want to see how many miles you’ve flown or how much money you’re owed? Try out AirHelp’s new feature and share with #AirHelp to show the world where you’ve been.

Travel service AirHelp allows travelers to check for any just delayed compensation they may be entitled to for flights that fall under EU protection law.

AirHelp is also available on Google Play and iTunes.