It’s good to know that in this basic economy day and age, there are still some rules that the airline will gladly honor, like the flat tire rule.

The flat tire rule is essentially an unofficial airline policy the gives check-in agents some flexibility to accommodate passengers who may have inadvertently missed their flight, due to, well, traffic conditions and other extenuating circumstances. It is basically the “sh*t happens” rule.

The issue popped up for a Houston flight going out of Newark this past weekend. I had decided to adventure the Basic Economy fare—I really am an efficient packer, but it doesn’t include flight changes and refunds—I figured that as long as nothing went wrong, I would be fine.

To my dismay, when I showed up at Penn Station at 7:05 am, there had been a morning power outage affecting the rails, with every train canceled until 8:07 am. For some context, we were trying to make an 8:40 am flight. Meaning I wouldn’t make the flight.

In situations where you know there is going to be a problem ahead of time, the best thing to do is call the airline before it happens.

The next logical step was calling, which happened at 8:04 am.

Here’s a quick script what I told the agent:

I wasn’t able to check in online yesterday, so I called in asking for the boarding time for the flight. I think he gave me the wrong time, and I didn’t figure that out to now. The problem is that right now, I’m standing at the train station. All the trains to the airport are canceled because of a random power outage, but if I take a taxi from here, I’m not sure I will make the flight back in time. It’s cutting it close, and even then, I will have to go through the manual online check-in.

Is there anything you can do from me? Can you put me on standby for the next flight after that? If you can’t, please let me know as soon as possible, so that if I have to take a taxi and try to rush to the airport, it would still be a viable option.

The most important thing in a situation like this is to put it in context appropriately, and outline the next best steps and options the agent can take. I also assumed they may not grant my wish. This ended up being so effective that not only did they gave me a confirmed change for free, but they also offered to give me several departing options from another New York airport, LaGuardia. (United pulled out of JFK back in 2015.)

Though the flight ended up being five hours later, it gave me time to go back home, and sleep for two or three more hours. Finally, I walked back to Penn Station and caught the 1:05 pm flight out, some three to five hours later.

The return flight back… 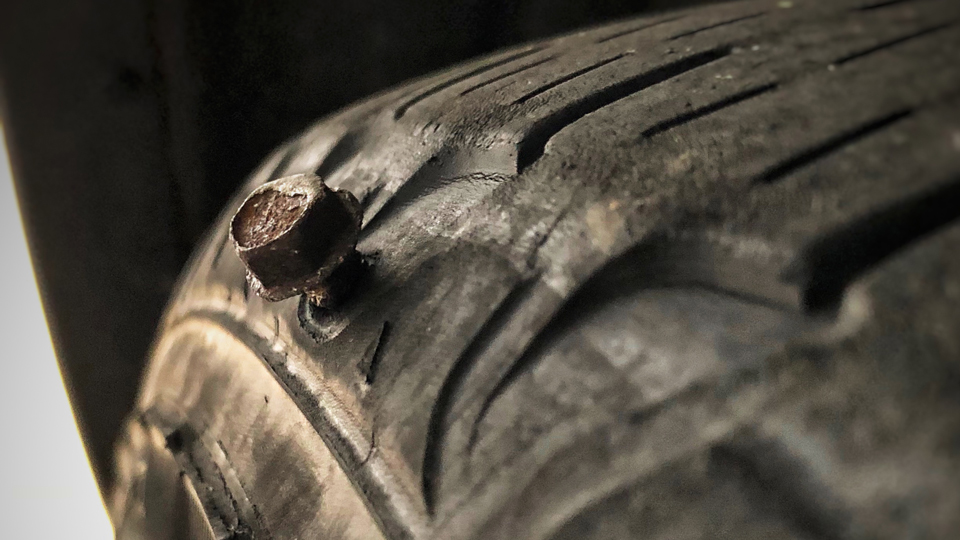 This trip was completely laden with problems, so more or less to my dismay, I had a second chance to invoke the flat tire rule on the way back to New York.

In this case, it was regarding a 10:20 am flight. There was significant problems starting the (rental) car in the morning, so I wasn’t able to hit the road until about 9:00 am.

Let’s think the through the logistics for a second, working backward from the flight of departure:

10:20 am The flight’s original scheduled departure time.
9:45 am Boarding begins 35 minutes before departure.
9:35 am Security and transiting to the right terminal.
9:25 am Checking in at the airport (on a basic economy fare, this is not possible to do online with no carry-on)
9:10 am Dropping off the rental car and grabbing the airport shuttle.
9:00 am I was still on the road, meaning I had less than 10 minutes to the airport, while being more realistically close to 25 minutes away.

Assuming that I’d hit all of those target times, which was unlikely, I could have made it on to the flight.

At any rate, after holding for 15+ minutes on the United hotline, I finally connected with an operator around 9:22 am. She politely explained that the only thing that they could do was put me on standby at the airport for the 11:55 am flight, where there was space available.

The situation was well resolved at the airport. The agent made a confirmed change for the next flight, and I arrived at the gate just as that flight started boarding.