Hipmunk obviously attracts the hipsters, but it’s got a couple of things going for it. If you haven’t checked out the site in a while, the search engine is finally starting to spread its wings a bit, even if it’s in the form a flying squirrel.

The one thing that Hipmunk always had over other search engines was that its interface was, by far, the friendliest of the bunch. Its design is much more minimalistic than your traditional search engine – but that’s probably a good thing, if you don’t want to bother with all the details. One of the best things I like about it is its ability to visualize a flight will take and to quickly determine whether its a red-eye. (I know it’s cheap, but don’t do it. You’re just going to hate yourself. Trust me.)

Seth Miller, who blogs on at The Wandering Aramean, points out one really great, not-so-talked-about feature that Hipmunk holds over the rest. It basically combines the power and the complexity of the ITA software with Kayak’s booking ability. If you’ve got a really, really complex trip, Hipmunk may be the place to go and book everything together. (Check out his primer for more details. This is ITA-syntax heavy; you’re going in deep here!)

Since the company made its intro a few years ago, it seems like they’ve also introduced a hotel search that also claims to parse through less traditional avenues, like AirBnB and hostel listings (both things I can get behind). Don’t worry; there’s always your super-traditional and expensive hotel stays – those aren’t going away anytime soon.

Out of curiousity, I ran a quick test search in Washington D.C. and Bangkok, and immediately, I got a nice map. Oh, pretty. 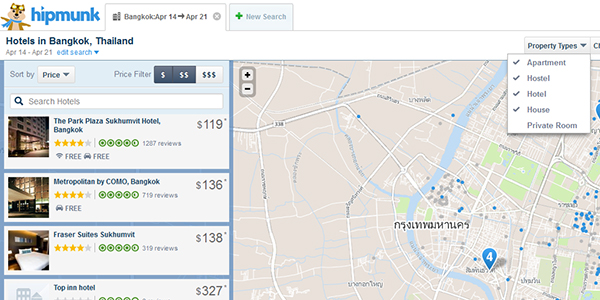 The AirBnB listings seemed to show up fine, though they seemed a bit sparse. That could be due to the fact that there might not be that much availability for the dates I was searching, though. But they were there. The company also pulls listings from HomeAway, a vacation listing site. On that end, the site seems like it has short rentals covered.

Hostel listings, however, didn’t show up at all – and I don’t know if that has anything to do with the fact that they haven’t managed to integrate Hostelbookers and HostelWorld, two of the biggest hostel booking sites around. Once I managed to filter results through the lowest price range, the listings still didn’t come out any better. For super, true-minded budget travelers, Hipmunk doesn’t seem to do so hot. Come on, I know Bangkok has hostels.

All in all, I would probably throw this in with my nice little bag of tricks whenever I’ve got to go somewhere. It is, however, still not my number one choice.

UPDATE: Hipmunk contacted me to say that Hostelworld results are indeed included. My guess is that they’re somewhat buried in the results because they were difficult to find, even when sorting through the “hostel” property type.