For years, I’ve been looking for the perfect map to adorn my walls. But I think I’ve finally found The One. This scratch-off map comes alive on the walls, revealing a kaleidoscope of colors once you’ve marked the places you’ve visited.

I’ve perused countless maps and globes all around the world, but it’s pretty rare that I come across something that strikes my eye just so. This Luckies of London scratch map designed by Xavier Unwin is a unique and personal showcase to any room it inhabits: The one thing that I love about it is that it’s something that can be perfectly customized to your own traveling patterns. Each map will be as different as the person that owns it.

I bought the map originally for $20 plus shipping through Uncommon Goods, though if I had been really smart, I would have realized the same map was selling for $16.98 on Amazon and Prime-eligible. (The last time I compared prices was probably about three years ago, at which point Amazon was still more expensive. Guess that’s changed.) Regardless, it’s a lot cheaper than the $34 that Urban Outfitters is currently selling it for.

Unsurprisingly, the poster arrived in a fairly attractive and sturdy cardboard tube designed to protect it. Inside, there is a thin sheet of tissue paper over the top of the map to keep the gold tin foil from accidentally getting scratched. The poster material itself has a nice shiny plastic feel instead of being a flimsy piece of paper. It measures at 23 inches (58.4 cm) long by 32 inches (81.2 cm) wide, which is a good size for hanging it above your desk or as a standalone piece on your wall. Of course, a travel-sized, more portable version also exists.

The great thing about the map is that country borders are delineated, so it’s not like you’re stumbling around in the dark trying to figure out where everything is. For easier reading, the boundaries continue to appear as a white border against the colored background even when you scratched off neighboring countries around a particular area.

Each region has its own colors, making for quite the visual if you’ve been all around the world. (From what I can tell, blue indicates North America, light green for Europe, dark green for Asia, turquoise for the South Pacific and yellow for the Middle East. I’m dying to know what Antarctica is. Pink??) 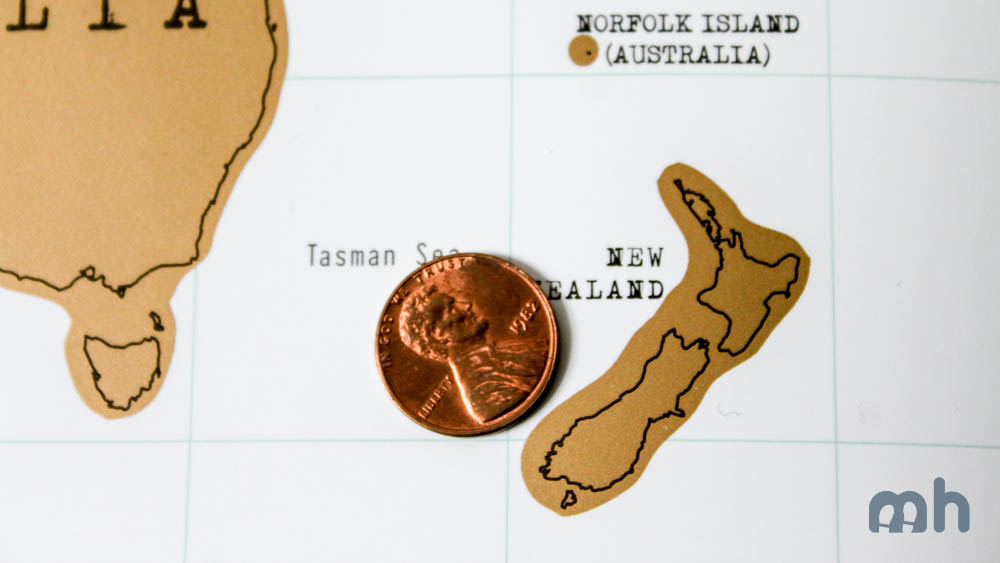 There’s a small subsection on the bottom that reveals information for ten specific destinations if you happen to be visiting any of them. In my case, I actually forgot to scratch these pieces off before I decided to hang it on the wall: my best guess is they contain easter eggs of some sort. The countries noted on the bottom include Australia, Bali, Egypt, Fiji, France, Korea, Hawaii, Turkey, Tibet and the United States.

Interestingly enough, a few bodies of water are scratchable but these eventually reveal themselves to be white just like the oceans, so you don’t have to worry too much about being precise, particularly around continental borders. This lets you be a little bit more liberal in your application with your coin of choice—a tried-and-true penny in my case—though my hands did eventually need a break after an hour or two of intense, deliberate scratching. I guess that’s only a good thing in this case.

Of course, a bunch of loose gold tin foil can leave the poster looking a little messy, especially if you liked to color in between the lines as a kid. (I don’t think its hard to figure out what kind of kid I was.) Cleaning the poster is a pretty straightforward proposition: I blew the loose pieces off the map. There were a couple of areas that needed more touching up, but damp cotton swabs does wonders keeping the poster buffed and as white as it did when it first arrived. It was then that I noticed I scratched a bit too hard around the Gulf of Mexico, slightly damaging the plastic, so you might want to take some care while you’re going at it. 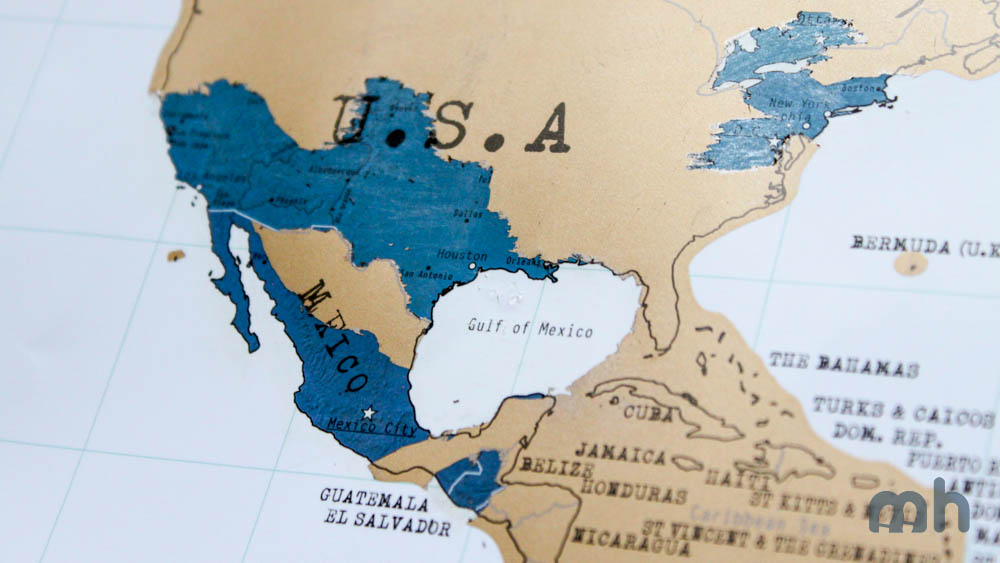 Should have been a little bit more careful around the Gulf and Toronto. Oops.

The biggest dilemma I had about owning the map—and any other owner will have about the map—was figuring out exactly how to scratch off the twenty-something countries I’ve been to. I mean, clearly, I’ve been to the U.S. Have I been to every state and city in the U.S.? Well, no. Should I scratch the state? Or just the city? Or the whole damn country? This is going to be a personal choice for everyone, but it will probably just boil down to how much of a purist you are.

To set the record straight, I’m not one of those people who count a country if I happen to be sitting there in the airport on a layover. But for visual purposes, obviously, the map is going to look better if you scratch off whole countries at a time. Some people have suggested scratching out entire countries, and then to supplement the map with pins to denote the cities you’ve actually been to. While it’s a plausible method, it wasn’t an aesthetic choice that appealed to me either.

In fact, the map isn’t exactly to scale either, with some countries being bigger or smaller than they should be. In some cases, some countries like the Cayman Islands, were so small they ended up being completely absent on the map.

Major cities aren’t really labeled—at least, until you scratch them off—which means you’ve got to have a pretty good sense of your own geography or it could mean unintentionally scratching a place you’ve never been. (I accidentally knocked on Ottawa’s door looking for Toronto. Oops!) And if you suck at it like me, it actually helps to sit side-by-side with a real map to figure out where to scratch.

In the end, I strategized for a mix of aesthetic pleasure and accuracy. For large countries like the States, Australia, and even Mexico I only removed the tin foil for regions where I’d been to. I tended to cover greater ground in smaller countries, so I had no problem scratching those entire places out. The island-nations, however, like the Philippines, were particularly more difficult to pinpoint so I took greater liberties with them. This also included the United Kingdom, France and Germany because… well, I felt like it. I guess it also means I owe Bordeaux and Berlin a trip at some point.

There’s really no one-size fits all solution and that’s the beauty of it: Each person’s sense of adventure is so individual. The one thing about the map is that when you’ve finally eked out where you’ve been and you haven’t—even if you’re a travel veteran—you’ll realize you’ve gone nowhere at all.

Purely for decoration but pretty much the coolest map you will ever own.