Luggage is one of those things that when you need it, you really need it. Better to do it without paying a fortune in excess baggage fees.

I absolutely detest checking in luggage, but often if you’re doing it, choice usually isn’t really part of the equation. In the past couple of years, I’ve lived in more cities than I can count — a U.S. customs officer once joked during a background check that by the time I received my security clearance, I’d be at a new address. Shipping can get expensive, frighteningly so sometimes and it’s just cheaper to haul everything back. Or maybe you just want to bring back as much of that Napa wine as you can. I’m not here to judge.

Some carriers can be lenient with their weight policy. North American airlines are the best at looking the other way if you’re just a tad bit overweight; this means being only a pound or two away from the acceptable limit. Generally, the standard allowance for each checked bag is 23 kilograms or 50 pounds. Excess bags—those that weigh over this amount—bring in, well, the most excessive fees. I can’t count the number of times I’ve slowly exhaled in relief when I’ve just hit the weight limit exactly or got a free pass.

This doesn’t always happen though, with European or Asian airlines being the trickiest. Ground staff at Asian airports, especially in place like Hong Kong and Japan where everything is done according to the book, are much stricter when it comes to adhering to weight allowances. In one particularly harrowing incident in Hong Kong two years ago, I overpacked two bags on an Air Canada flight by about 1-2 kilos (about 2-4 pounds). The punishment? I was asked to pay about $100 USD extra to check in per bag.

Enter luggage scales. After sussing out differences between the Travelon Micro Scale, which appears to be the most popular scale on Amazon, and the Camry luggage scale, I opted for the latter based on size, weight and the fact that the reviews seemed to suggest it gave more accurate readings than its competitor. As a bonus, it was also about five dollars cheaper than the Travelon at $11.50. I’m certainly not going to kick up a fuss about that.

The dimensions of the Camry scale measure about 5.1 in (13 cm) x 1.6 in (4.1 cm) x 1.2 in (3.0 cm), or just slightly bigger than the width of my hand. I have rather smallish hands—some would say midget-sized!—so they would be fine for a person with larger hands to grip. Meanwhile, it’s also compact enough to toss in your bag or purse. Both device footprints seemed comparable, so that wasn’t much of an issue. The entire device also only weighs 3.2 ounces (90.7 grams), less than the reported weight of the Travelon Micro Scale.

As a side note, I definitely wonder if the Travelon Micro Scale’s metal hook contributes to the device’s extra weight. There’s also nothing to suggest that the readings account for the hook’s heftiness. This is another advantage of the Camry scale, which uses a nylon strap, thus making it lighter to carry and putting some of those worries to rest. I’d like to say, though, that the one disadvantage about the hook design is that it can make it difficult to hold weigh certain types of items. For backpacks and suitcases that have thin handles, it’s ideal. Boxes will need to be weighed on a separate device.

(For those wondering, the Travelocity Travel Luggage scale seems almost downright identical to the Camry, though it’s hard to say without having the actual device in my hand. A lot of these companies use the same Chinese manufacturer and product, but just slap their own branding on it.)

The luggage scale has two buttons, a dedicated power and unit button. To switch between the different units (kilograms, pounds, Celsius and Fahrenheit in exactly that order), you need to continue tapping the unit button until you get to the measurement that you want. Only one display is shown at a time, but the rather simplistic method of cycling through the units until you reach the one you want makes it very easy to use. 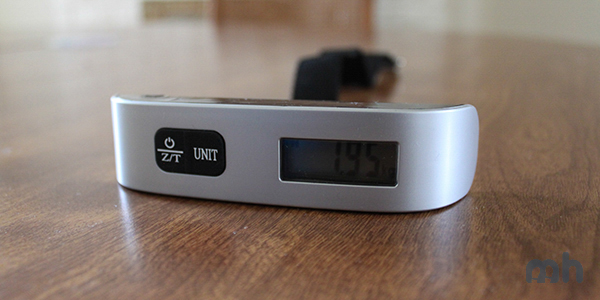 Though the scale isn’t going to tell you weight to the fifth decimal point, it does gauge weight sufficiently. The kilogram setting reads up to a hundredth of a kilogram; all other measurements read up to a tenth of that particular unit. While I wish there was slightly more gradation for the other units, it makes complete sense that kilograms would receive an extra digit place. In the metric system, one kilogram is equal to approximately 2.2 pounds, so a tenth of a kilogram won’t quite have the same gradations as a tenth of a pound. In real life, when we’re talking about a tenth of a pound being the difference in being charged an arm and a leg, the kilogram reading will naturally need more specificity.

To measure a piece of baggage, it’s pretty easy. The bag simply needs to be attached to the hook on the scale. You then lift up the bag using the handle and wait for the display to stabilize and flash three times to signal that it’s done. On a flight to San Francisco, I decided to do a test run when it became clear I was going to run over my carry-on bag allowance. (Anything for a box of Girl Scout cookies.) The scale measured my backpack at 9.7 pounds. Just to be safe, I decided to throw the luggage scale in my purse to prevent anything throwing off its weight at the airport.

When I threw the bag on the luggage scales at the airline counter, it initially registered at 10.0 pounds. Then a funny thing happened – it kept jumping back between 10.0 and 9.5 pounds, unable to settle on a number. I’m fairly suspicious that the airline counter scale was only able to measure in gradients of half a pound, preventing a precise read. If the backpack actually fell somewhere between 9.5 and 10 pounds—say at 9.7 or 9.75 pounds—then it would make sense that the scale had trouble distinguishing at which weight to register it.

My results were substantially different when I packed a *very* full suitcase a few weeks later. I was heading back to New York after four months away and I had bought a lot of shit in the meantime. The measurements swung back and forth with significantly more variance. To be specific, the Camry clocked the suitcase at 44.9 pounds, 53.7 pounds and 53 pounds in three separate readings. Granted, I think this has a lot to do with the fact that I simply can’t lift 50 pounds—half of my entire body weight—off the ground with a steady grip, even with two hands. When I checked in my baggage at the curb, I found that the bag clocked in around 46 pounds. For bags close to the weight limit, the scale seems to lose a substantial amount of accuracy if you’re not strong enough to hold it.

To test the scale for the third and final time, I checked a bag on a last month from Los Angeles to New York. The backpack weighed in at 20.8 pounds with the Camry; when I checked it at the counter, United’s scales at LAX registered it at 20.5 pounds. It’s entirely possible the backpack actually weighed 20.75 pounds, which could have been rounded up or down at the airport. Without the ability to get a more accurate read, the travel scale seems pretty spot on. In short, the Camry scale appears to be accurate up to a tenth of a pound for most pieces of luggage. However, given how most airline scales seem to deviate by a larger amount, I’d leave half a pound as some room for error.

To quickly gauge the temperature scales, I checked how warm it was in my apartment. I have my thermostat in the building set to 68°F; the Camry scale registered the temperature as 69°F. I think I can give the luggage scale a little bit of leeway for being about a degree off, since its main purpose won’t be to check the weather. A second test showed this one degree difference in variation between the scale and the thermostat, though it could possibly vary depending on what part of the flat you’re in.

I am actually a little confused about including the ability to check temperatures with a luggage scale. It seems like by the time you use the device, you’ve already figured out the temperature of your environment; in fact, if anything, you would be more concerned about the weather where you’re headed. Anyways, it’s an interesting, if not completely random feature to have.

Basically, the whole point is that the Camry luggage scale is a pretty good tool to have laying around the house, given its fairly accurate readings. Just in case you ever need to check in a bag.