It’s weird that I’ve owned several versions of this bag, but all the better to judge the latest version of REI’s award-winning daypack. For ultralight packers, the REI Stuff Travel Daypack is practically almost the perfect space-saving solution.

Backpacks usually fall into two categories: the rugged, multipurpose camping bag designed to withstand serious tear and its more urban, city-dwelling cousin, the daypack. This REI bag falls squarely into the latter. Though it’s not perfect by any means, it’s a solid contender in the portable daypack category. It’s also the perfect secondary bag for long trips and can be used as extra storage if a main bag is low on space.

The REI Stuff Travel Daypack retails for $29.50 on REI in a slew of colors. Though the Travel Daypack is no longer manufactured in black, it now comes in steel (gray), wave (blue) and taro leaf (green). We received a blue version from the company, but despite our preference for neutral colors, it still remains an attractive bag.

I actually bought the REI Zip Travel Daypack back in 2010 before I left for my first real international trip. Since then, it’s served me pretty darn well with only a hiccup here or there. A year later, REI released the Stuff Travel Daypack as an update to the Zip Travel Daypack, but the Zip performed so well that it’s only been now that I’ve gotten around to posting this review. Regardless, it’s a worthy update to what already was a great bag.

There have been a couple of changes between both the Zip and the Stuff daypack. The Stuff is presumably an ounce lighter than the Zip, weighing in at 10 ounces (283.5 grams). The capacity of the bag has also been extended from 19.7 liters to 22 liters for additional space.

The full dimensions of the bag, on the other hand, have remained exactly the same at 18.5 inches (47 cm) x 10 inches (25.4 cm) x 6.5 inches (16.5 cm). The structure of the bag—top compartment, main compartment and exterior pouches—is exactly identical.

The size of the daypack in its most compact form has remained more or less the same size, measuring about 8 inches (20.3 cm) by 8 inches (20.3 cm) at its widest point. When we stacked the older daypack on top of the newer daypack, though, we did notice that the newer version had a slightly bigger footprint around the perimeter, though the difference was far too small to make much of a difference — we’re talking about by like a centimeter or less here. 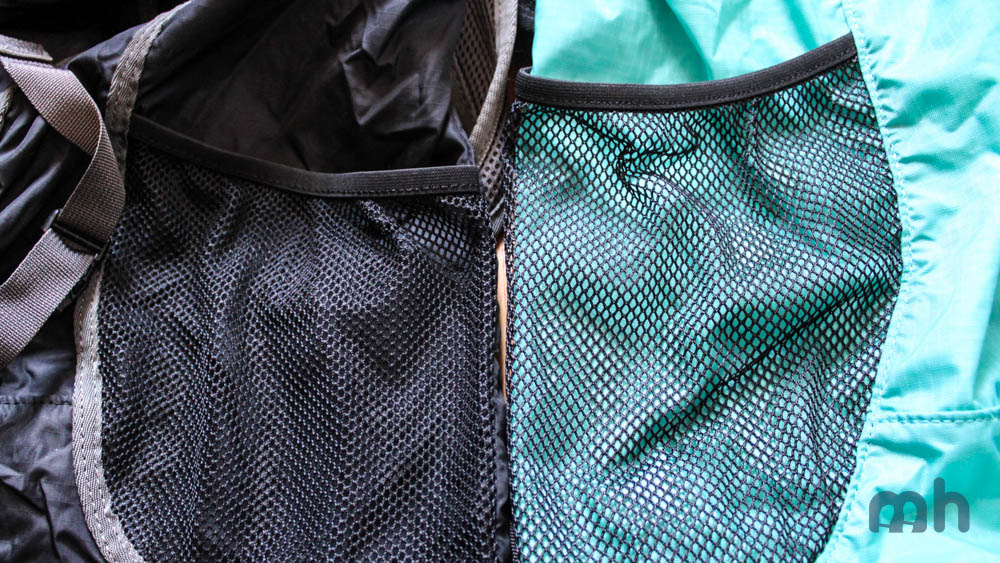 The pouch lengths of the Zip (left) and Stuff (right) compared.

There are a few key differences, though, when it comes to certain design elements. The most obvious one is that when the bag is folded up, there is now a hanging loop attached at the top, letting you hang it wherever you want. The backpack straps also seem to be slightly more padded. Though it feels slightly less flimsy than the older model, there doesn’t seem to be any appreciable difference while you’re wearing it. Perhaps, the third and most important change is that exterior pouches in the Stuff have been lengthened by a whole inch.

One of the main problems I often had with the Zip was that water bottles would routinely fall out of the side pockets. In the updated version, the front pouches have been lengthened so that a standard-sized bottle of water fits comfortably inside.

Both a 20-ounce (591 mL) bottle of Dasani and a 16.9-ounce Nestle water bottle will be secured up to the neck of each bottle. Depending on the size of your water bottle, most people should find that this issue has almost become nonexistent. 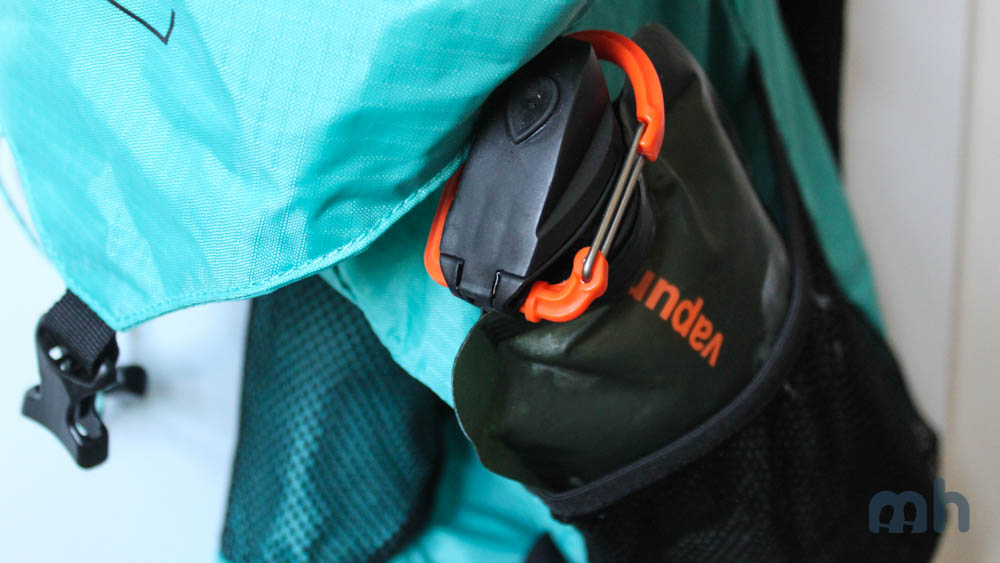 Is it gonna fall out?

The main drawback to its stowaway form is that there’s actually very little structure to the bag itself. This can end up being really uncomfortable if you’ve got a bunch of weirdly-shaped and clunky items in there. Unfortunately, this is clearly a design choice that’s been made in keeping it functional as possible. There’s no laptop compartment but a small laptop (or tablet) fits well inside. I generally use this to “structure” the bag, laying it flat against the backside, making it much easier to carry.

The Stuff Travel Daypack can also be a great overnight bag. Items I need to access frequently get dropped into the top “hood.” Electronics and clothes usually get tossed in next, followed by toiletries. I’ve even fit in my hairdryer and DSLR (sans case)! It’s not a great multi-day option, but it would hold up for two days sufficiently. During longer trips, I keep it stowed away until I need it or, even better, to carry souvenirs back home.

The Stuff can also withstand its own when it comes to the elements. I tested this out during several spring showers in New York. I left several slips of paper sitting in the top compartment of the bag, just to see if they would escape unscathed after the torrential downpour was over. Though the ripstop nylon was a bit damp when I got home, the receipts were fine when I later checked them. The fabric also managed to dry pretty quickly afterwards.

It’s an amazing daypack, but given how long it’s been around, the REI Stuff Travel Daypack is probably due for an update fairly soon. I’m not an expert at predicting the future, though one thing’s for sure: It will probably last you a long time.

A pretty great collapsible daypack. There are a lot smaller stuffable daypacks out there, but what they gain in portability they lose in structure. This is a great compromise.