To test the Eagle Creek Undercover Money Belt DLX properly, I took it to a place that’s practically made swindling tourists an art form: Disneyland. Besides, I don’t trust anyone that sells fairytales.

Of course, I could have always opted for the fanny pack—which I can assure you is alive and well—but I needed an extra layer of protection against the swarms of 5-year-olds and, more importantly, against the theme park’s extortionate prices. As a young kid in Southern California, I remember my parents complaining about the $20 admission into Disneyland. They would bite their words now; an adult one-day ticket admission into the theme park now costs $92.

The money belt, which retails for $20 on Amazon, measures at 11.4 x 5.1 x 0.1 inches (28.96 x 12.95 x .25 cm) in a fanny-like shape. It’s pretty light at 2.1 ounces (59.53 grams) and made out of a nylon ripstop fabric, which is actually a lot softer and more comfortable than it sounds. There’s also an adjustable elastic strap that can be stored away when not in use. For this, there’s actually an open left-side slit along the back side. It’s a really conscientious design choice for strap storage when you don’t need them.

The main compartments of the Eagle Creek money belt is pretty much divided into two front pockets, with one back and front section. The back compartment is the larger of the two and thus also further subdivided inside for greater organization. Technically, this creates three sections in this compartment, so it’s best suited for keeping loose bills and other random assorted knickknacks. Because this compartment also sits higher than the front compartment, it is also the most accessible section of the money belt when it’s worn around the hip. (There are a couple of ways to wear it but this is pretty much the ideal placement for ultimate security.)

The frontmost compartment pretty much has no organizational structure, which makes things simple. You just throw shit in there and then you’re done. Because of where it is situated and the fact that it’s not the most easily accessible zipper, the front compartment is actually a lot more ideal for keeping valuables that you would need to access less often. Amazon reviewer ijcast remarks that there’s ample storage for everything that you might need:

I have a wallet that measures 1.5 inches thick and I can easily get that into the Eagle Creek money belt with plenty of room to spare. I also carry two sets of keys and have room for a passport, USB thumbdrive, coins, and my iPhone 4S. This effectively makes sitting down in an airplane seat much more comfortable when my pants pockets aren’t bulging out due to all the items I have to carry. If you can fit your item(s) within a box that measures 10 inches long x 3.5 inches wide x 1.5 inches thick – then it would probably fit into this money belt.

Finished with a preliminary inspection of the money belt, I am ready to get on with the Disneyland portion of the trip. After all, it’s no secret that the happiest place on earth also has the most expensive churros on earth. 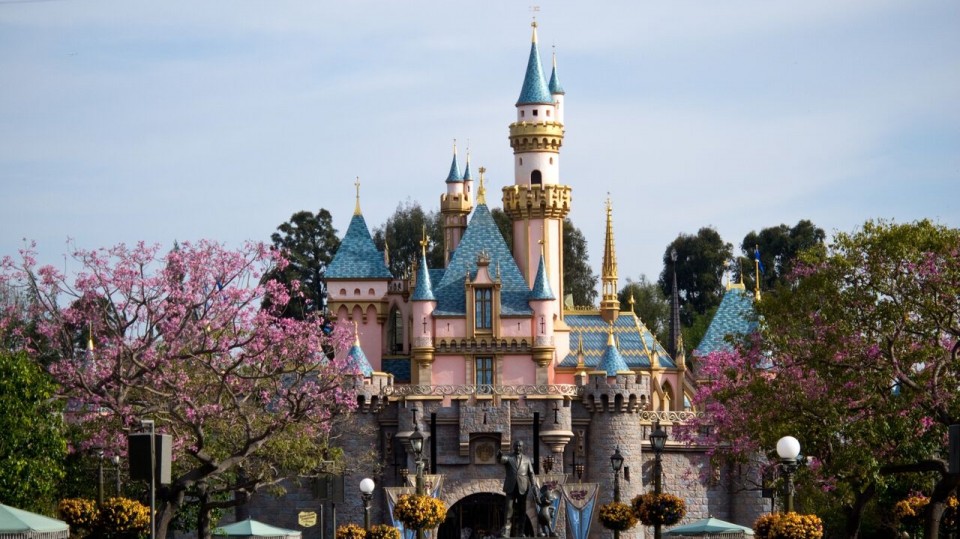 11:29 a.m. I arrive at Disneyland. I am scammed out of $16 as the parking structure attendant lunges for takes my wallet from my hand just so I can put my car in a stationary position for approximately five hours. Hey, I could be having a nice lunch instead.

12:02 p.m. I pick up my complimentary 1-Day Park Hopper pass at Guest Relations. Ready to start the day! I head to the bathroom to put on the Eagle Creek money belt. I throw in some cash in the back compartment along with some more important items like my ID and a few credit cards in the front.

12:12 p.m. I eagerly bite into my $7.02 California burrito—quite singlehandedly the best culinary creation ever invented—that I picked up at a nearby taqueria. It is delicious. So delicious that I start gloating over the fact that I managed to do lunch for the price of two water bottles at the happiest place on earth… until I realize I’ve left my phone behind.

12:26 p.m. I discover that my phone has gone missing in the restroom. I go to Disney City Hall to report it as lost. A claim is made. I conclude that Disneyland is a dangerous place.

12:43 p.m. I am able to feel my stress levels slowly rising. I decide there’s nothing I can do for now and begin exploring the park. I see a couple of food carts around the park. Frozen lemonade costs $4.25, cotton candy costs $4, Nestle Dibs and a Haagen Daaz ice cream bar each cost $5.50 apiece. The prices aren’t extortionate by movie theater standards, but come on, we’re smack dab in the middle of Orange County.

12:50 p.m. I head over to It’s a Small World, my favorite ride of all time. It is closed and I am devastated. What kind of dark magic is this?

12:54 p.m. I am amazed by the sheer amount of children that seem to populate the park. I contemplate overpopulation and the state of my eggs.

12:57 p.m. I decide line up for Storybook Land. It’s a 30-minute wait. In the course of this time, I realize that the fanny pack is being resurrected at Disneyland. I no longer feel so conscious about my money belt; in fact, I probably fit right in.

1:40 p.m. I’m starting to get thirsty again. I’ve finished off the small bottle of water I got from the JetBlue flight earlier that morning. I unwillingly begin shopping around for another bottle. The average price for a standard 20-ounce bottle of Dasani seems to be $3. VitaminWater costs $4.

1:42 p.m. I find a “deal” for $2.79. That’s not including tax. I’ve been on the lookout for a water fountain everywhere, but they don’t seem to exist. I bite the bullet as I begrudgingly hand over the credit card from my money belt. Next time I decide I will try to get some water at the restaurant. I should have brought my Vapur collapsible water bottle.

1:47-2:15 p.m. I get in line at Thunder Mountain at Frontierland. The wait is estimated at 30 minutes, but the ride is actually pretty fun, though I remember thinking it was pretty boring as a 15-year-old teenager. In fact, I think that’s the most adrenaline I can currently handle. My age is showing.

2:23 p.m. Navigating through a field of children is perilous. It’s like rush hour on the 405 except traffic lanes don’t exist. Just bumped into my fourth toddler. I am unsure if he was trying to reach for candy money, but we bump, dust ourselves off and continue along our previous trajectory.

2:30-3:37 p.m. I get in line for Star Tours, another oldie but goodie. Have they changed the script over the years? The wait is supposed to be 40 minutes, but I almost fall asleep in line. The ride isn’t as great as I remember it, but more importantly… 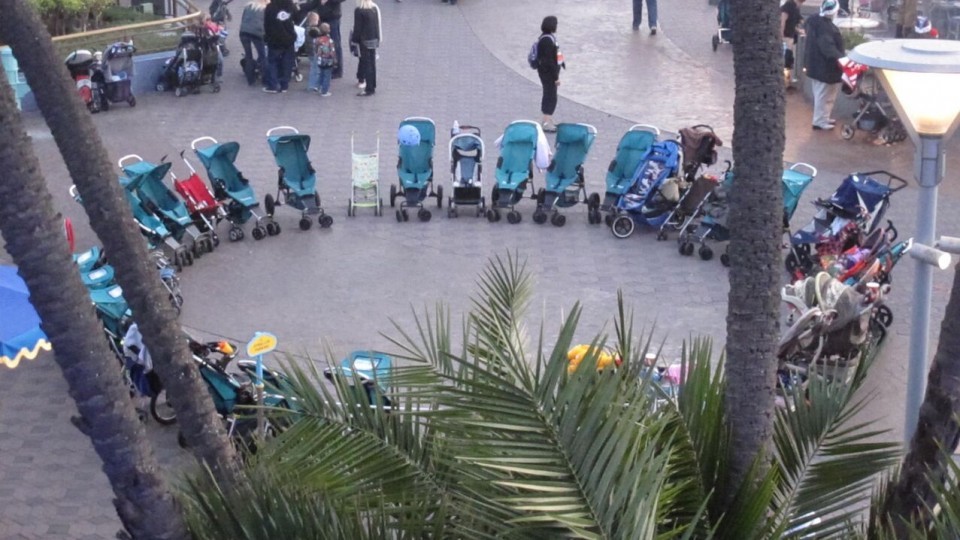 5:00 p.m. I exit the park. Total damage for one afternoon? $163. This includes the value of a one-day Park Hopper ticket, parking at Goofy 3E, a California burrito and some water. This doesn’t include dinner, which I am choosing to take outside the park. But one day is enough. My biological clock can’t handle it.

In fact, I almost enjoy wearing the money belt so much I don’t even remove it right away. (I took it off later that night.) It does a great job of holding your valuables discreetly while you run around town — for several glorious hours, I was practically freed from carrying around a purse all day long. This is what it must feel like to be a man. I consider incorporating the money belt into my daily routine.

Aside from the phone incident, which was never placed inside the money belt, it did a great job of keeping my belongings discreetly tucked away. The money belt is also comfortable enough to keep on while you’re in the restroom. I’m not quite sure how this works if you’re a dude (in a public space), but it seemed fine enough. Maybe that was too much information.

Inspired by one Amazon reviewer, I later try to sleep with the money belt on. Though I’m not liking it as much as these people seem to be—besides, my roommates are decent people—I do sit there and contemplate the dangers of Disneyland some more.

I used to carry a big book of fairytales around as a kid. Sometimes, the prince rides in to save the princess, or for a more modern take, the prince and princess go off to slay dragons together. Mulan. George Clooney and Amal Alamuddin.

My mind drifts in and out. A memory then comes to me — one I haven’t thought of in years, of a blurb I read in a book about a decade ago. It’s a passage Chuck Klosterman wrote in Sex, Drugs and Cocoa Puffs, that I’ll now excerpt:

I remember taking a course in college called “Communication and Society,” and my professor was obsessed by the belief that fairy tales like “Hansel and Gretel” and “Little Red Riding Hood” were evil…Even if those theories are true, they’re barely signiﬁcant. “The Three Little Pigs” is not the story that is fucking people up. Stories like Say Anything are fucking people up. We don’t need to worry about people unconsciously “absorbing” archaic secret messages when they’re six years old; we need to worry about all the entertaining messages people are consciously accepting when they’re twenty-six. They’re the ones that get us, because they’re the ones we try to turn into life. I mean, Christ: I wish I could believe that bozo in Coldplay when he tells me that stars are yellow. I miss that girl. I wish I was Lloyd Dobler. I don’t want anybody to step on a piece of broken glass. I want fake love. But that’s all I want, and that’s why I can’t have it.