I’ve figured out how to get the best deal on pretty much any hotel room. It’s not some big secret or new app. It just requires the right numbers. Book a double room for three people.

Recruiting one other person to take a trip is like the default setting for travel but after taking a couple recent trips in trios that have worked out really well, I’d like to propose going for threesome travel. Not too few, not too many, just right. Three feels like a party on the road while still being a manageable and intimate number. There’s also always a tie-breaking vote which is no small matter when things get heated over where to go for dinner (#travelproblems). But one of the main reasons it works so well is that it makes hotel rooms—three people to a double and all kosher—the cheapest.

The savings vary but I’ve always had it work out that it’s cheaper per person to have three people in a double than two. At one Shangri-La hotel it was about $10 cheaper per person per night with three people in the room than two. That’s not much but it’s something and when traveling for over a week, its money saved. I replicated my findings recently with a Booking.com search and found the Hilton Tokyo Hotel in Shinjuku to work out to $107/person/night ($321 total) for three to a double room versus $133.50/person/night ($267 total) for two to a double room. 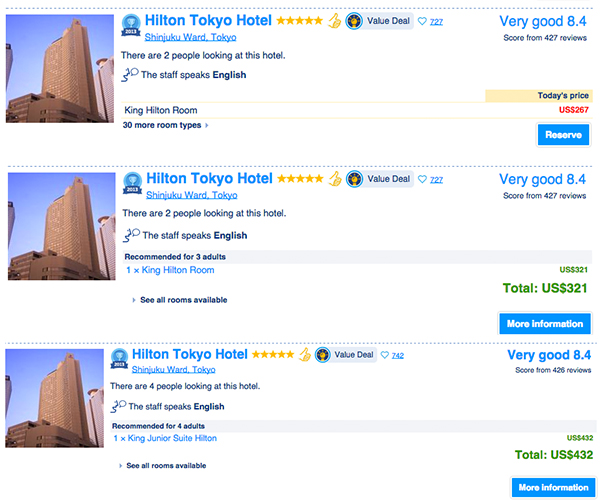 How the number of people affect hotel room pricing.

This also held up when I decided to see how the cost split among four people would be. The total cost for four people was $432, breaking down to $108/person/night. So not only was it a dollar more expensive than splitting a hotel room amongst three people, it’s also one more person you have to deal with.

For my first trio trip I was concerned it would be a hassle to find accommodation for three to a room but it was fine. Most major hotel chains are used to making rooms up for odd numbers of guests, families, or who knows whatever strange requests they get. We were just upfront when speaking with hotels that it was for three people to make sure they could make that work for us. In all cases, the price for adding a third bed or an extra cot was loads cheaper.

My last Tokyo trip proved a bit more challenging. Real estate is at a prime and hotel rooms are generally smaller, so three people won’t work at a lot of places. My friends and I started the process by pinpointing the hotels we wanted and then calling to consult if we could do three to a room. After a string of no’s and some language struggles we took a new course of action.

Booking.com and Expedia became our best allies. Both sites have the option to specify three people (or more) to one room. They also, I found, only pull up options where three people can actually and definitely fit into the room for those specified dates. Other sites—the one that comes to mind is Lonely Planet—pretended they were presenting real options for three people but then popped up with caveats to contact the property to make sure. We didn’t have the time, endless Skype credit or language skills for all that. 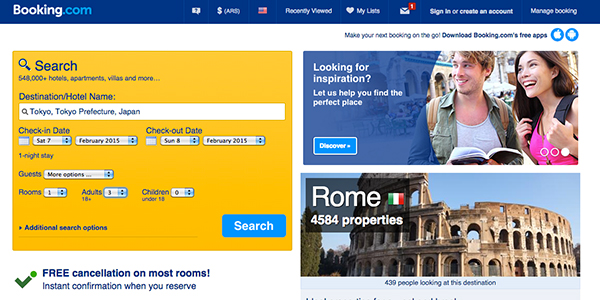 Expedia is the way to go.

Not that I need to go in-depth about this but it’s also good to actually really like those three people you’ll be sharing a room with, too. Thankfully, that has always been the case for me. In three to a room, you’re all involved in each other’s business more so than would be with the standard two to a room. (More bathroom schedules to deal with, less space to throw around luggage.)

Not everyone gets to sleep like a king, either (or in the king). But each trip we’ve been gone enough nights that it makes the rotation fair for who gets the extra bed. Sometimes it’s been something so large and comfortable the term “cot” just won’t do and other times it’s been a convertible couch. The extra bed/third sleeping space has always been totally acceptable and sleep-able, even if a bit smaller than the other option.