Make no mistake, the Everlane Weekender is a classy bag. This is something I’d get for my boyfriend… and then later sneak out to the airport with while he’s sleeping.

But its pretty façade doesn’t make up for its lack of substance. As much as Everlane wants to position the Weekender as a unisex bag, it isn’t. Though this was something that wasn’t immediately apparent when I received our sample from the company, it became clearer and clearer over time as we spent more time with a wide array of weekend bags. In the end, it actually became one of the travel bags we prefer the least, looks aside.

For those interested, the Weekender retails for $95 on Everlane in 12 different colors. If you’re feeling luxe, the two suede versions retail at $135 apiece though I generally don’t recommend it because suede is incredibly hard to clean, never mind when you’re traveling. (If you buy through our referral link, you’d be supporting the operations of this site.)

Everlane has done a good job of making sure the bag complies perfectly with airline regulations. The bag measures 22 inches x 8.5 inches x 12 inches (55.9 cm x 21.6 cm x 30.5 cm) so it stows away in an overhead compartment effortlessly. Though the manufacturer wasn’t able to give us an exact figure, the company estimates that the bag has a capacity between 30 and 34L, supporting up to 40 pounds of weight. The company wasn’t able to tell us the weight of the actual bag, though I wasn’t fussed about its light weight.

The bag pretty much positions itself as a high-end weekender without the associated cost. The two leather straps are a nice touch compared to other duffels we saw but because the handles aren’t folded, this can actually make it more uncomfortable to hold if you’re only using your hands to carry it (the way a guy would). This is in stark contrast if you’re carrying it under your arm, like a girl would. It also has a 12-inch shoulder drop which helps if you’re carrying the bag while wearing a huge winter coat under arm, but can make it dangerously close to the ground otherwise. It comes with no shoulder strap, which while isn’t a huge deal breaker in itself, does actually limit its target demographic — I think it could have kept its male customers with this addition.

To be completely honest, I wasn’t entirely clear about how this bag alienated most dudes until I sat down with a member of the opposite sex who made it explicitly clear to me that no self-respecting guy would hold it under his arm. I didn’t get the point until he demonstrated it to me and, to prove this point, I’ve Googled a bunch of pictures of men holding the bag. 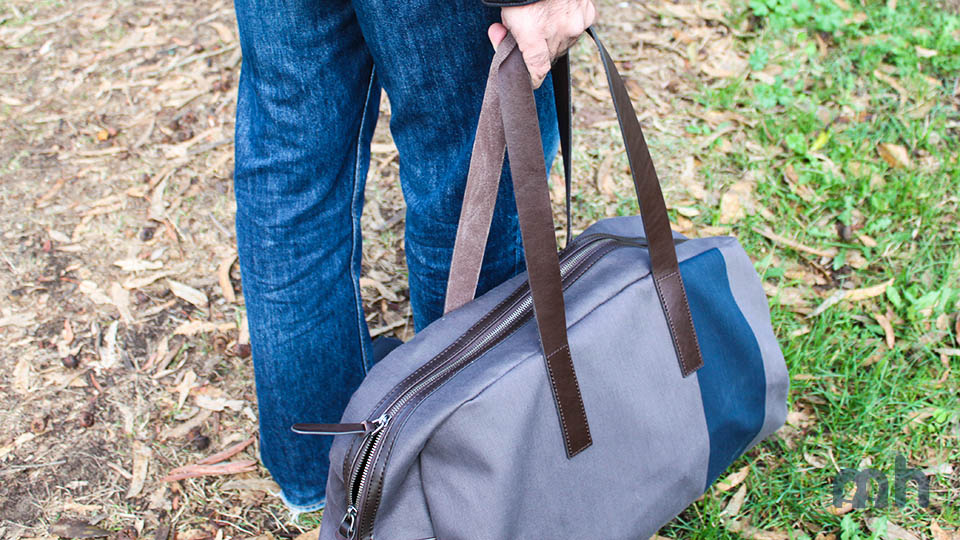 They all do look a little bit awkward.

Look how close to the ground. No bueno.

Even then, when he held the bag as he was apt to do, the bag came dangerously low to the ground and that’s with a 6’2 frame. This opens the bag to dirt, scuffs and general bad things.

This would actually be an issue because the bag’s construction materials are not made to last or be brutalized through, say, like, 75,000 miles of hardcore travel. The exterior isn’t made out of canvas, which is probably one of my preferred materials for a duffel or weekender but instead of cotton twill. It’s nice and soft to the touch but it’s immediately apparent that this is not a bag that you can just throw around or pour barbecue sauce all around and clean off with no problem. Not that I plan on doing that unless I’m going to Texas. Everlane asks its owners to “spot clean” the bag only.

Updated: September 3, 2015Even despite the questionable materials, super intern Miranda notes the long-term durability on this bag ain’t half bad: “I’ve had this bag for about five years now. It’s my go-to vacation bag, usually for long weekends but I’ve stretched it as far as a week-long trip. It still looks great albeit there’s a little wear and tear. The zipper even works despite all the overstuffing throughout the years. My one qualm is the organization… While it can fit a good amount, there is only one pocket and finding items can be difficult. Overall great, durable, stylish bag. I’ve gotten many compliments and lots of use.”

In terms of compartments, there really isn’t that much to write home about. There’s an inner zip pouch that measures 10 inches wide x 9 inches long. There’s not much depth to it at all so don’t expect to fit bulky items in there. Think knickknacks like small jewelry, receipts and small wallets as long as they’re not too bulky. There’s also an unsecured outer compartment situated on the outside of the bag for a quick place to stash certain items like your phone or your ID if you’re trying to move as quickly past security or the link. However, it’s not the safest place to store belongings because anyone can literally snatch something while you walk past, so I wouldn’t keep anything important in there. 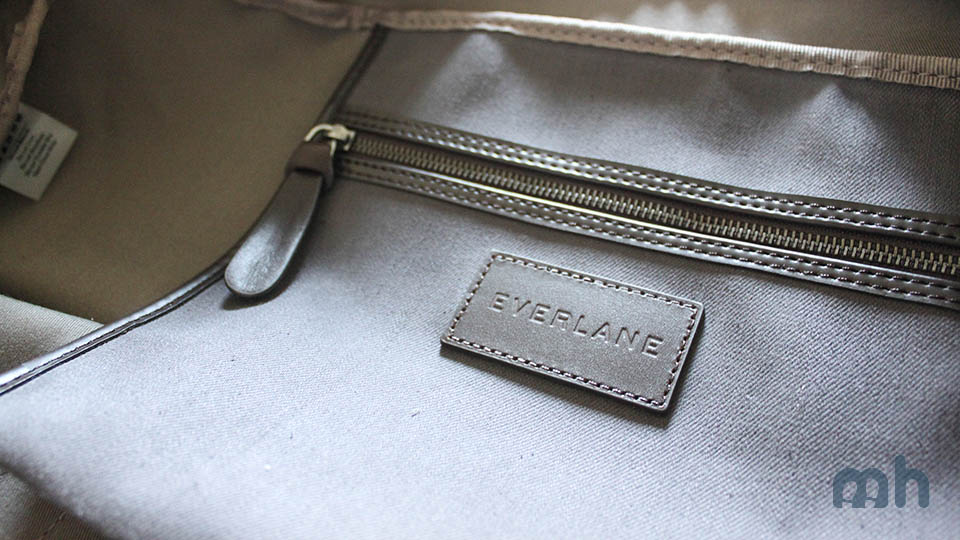 Then there’s the interior, with the same cotton twill for the lining. Now, I have a problem with zero organization inside—I guess maybe it’s time for me to invest in some packing cubes?—but there is basically the world for you to play in there.

The one thing that the Everlane does somewhat well is look great but even then, I think the Cenzo Duffle delivers much, much better value even at twice the cost. I think it does a better job transitioning between different kinds of travel than the Herschel Novel but, then again, that’s a looks thing. It’s priced about the same as the latter and the Herschel Bowen… and in the sub-$100 price range, unfortunately, there are lots of options. The Novel or Bowen are more functional: in the words of a dude, the Everlane bag is a girl bag because “girls like stylish but impractical things.”

Truth be told, in the middle of our weekender bag onslaught, the Everlane seems to fall short of the pack even if some of the other ones aren’t quite as perfect. In that sense, the Herschel Novel seems to be more all-purpose and comes with a shoe compartment. And in terms of pure looks and value, the Cenzo Duffle kills it.

The Weekender is certainly not the perfect travel bag. I would have preferred an inner compartment instead of an outer one. I would have even loved a section for my shoes to keep the interior from getting dirty. At the very minimum, it wouldn’t have been that much harder for the company to add a detachable shoulder strap. But like a good-looking woman with no substance, sometimes you just can’t resist.

The Everlane Weekender is a looker with not much substance that will appeal more to women than men. While it’s appropriately-sized for a weekend, it comes zero bells and whistles. Skip check-in with this bag—it’s not made for that—and bring it only as carry-on luggage if you absolutely have to. More than anything else, you’re paying for looks and even then, there are better options.