Thankfully, the world doesn’t revolve around Tumi. The Muji hard case suitcase is a delightful—and affordable—alternative for anyone in the market for new luggage. For those not familiar with the brand, Muji is a well-known Japanese retailer known for their streamlined, practical and artfully designed products. It just might be the best kept secret in luggage out there.

Updated: September 26, 2017In August 2015, the suitcase got seriously dinged after being gate-checked on a U.S. Airways flight (rough handling). The warranty only applies in Japan and has no international coverage despite the claim that the suitcase is protected under a two-year warranty. Initially we removed a half star because of this, but after continued use, there has been zero incidents, so we’re returning the original rating back to four stars. The retail price also has dropped to $160 and capacity has been upgraded to 35L from 33L, making it a steal.

The spinner hard case comes in three sizes: the 33L, the 60L and the 85L. The strange nomenclature just refers to the volume and capacity that a bag can hold. The 33L is best for carrying on, the 60L is best for checking in and the 85L is best for bringing the water tank with you. (There’s a 102L version in Japan; I presume that’s for transporting people.)

Muji’s hard cases are made out of polycarbonate, which is a material that tends to be a good compromise between being durable and strong while remaining lightweight. It’s fairly impressive that the suitcase itself weights about 7.5 pounds (3.4 kg) and claims to carry up to 26.5 pounds (12 kg) for a total of 34 pounds (15.4 kg), though I’m sure I’ve packed significantly more than that. At any rate, I’m not strong enough to lift 40 or so pounds into the overhead bin. Most travelers probably won’t care enough since that’s not the purpose of this suitcase in this size.

Interestingly enough, the Muji case is significantly lighter than the Tumi Alpha Carry on, which weighs in at 10 pounds (4.5 kg). Given the weight allowance for an international carry-on is 33 pounds (15 kg), I’d rather try to eke out some of that extra space with the Muji bag.

There’s a direct correlation between all of this. The Wirecutter notes there’s a direct tradeoff between weight and durability, choosing to prioritize material strength over lightness in a suitcase. While I’d normally agree, the Tumi actually takes up a solid half to third of the allowed carry-on weight and it’s worth remembering carry-on luggage typically needs to sustains less damage than traditional checked-in luggage. It was even able to support my weight—some 105 pounds—at the airport when I decided to turn it into a temporary seat at the gate out of pure boredom.

The manufacturer claims that its quality standards are rigorous. In order to pass muster, the hard case trolley products have been dropped from 39 inches (over 3 feet or 100 cm) high, dragged some 9.9 miles (16 km) on an outdoor road, tossed around in a drum and have even been loaded and lifted by the handle a minimum of 3,000 times. Compare that to the fact that I just sit on my luggage.

In terms of dimensions, the Muji 33L measures 22 inches x 14.8 inches x 9.2 inches (55 cm x 37 cm x 23 cm). Leaning on the smaller side, I’ve always found it to fit in perfectly every overhead bin I’ve ever tried to stow it in. Given that new airline regulations have recently been revamped to favor smaller bags, this is an asset. Though I wouldn’t pack past a week’s worth of clothes and belongings, it’s important to remember you wouldn’t want to actually pack more than that even if your trip was longer. I’ve managed to take the Muji on at least three week-long business trips to New York City without trouble. 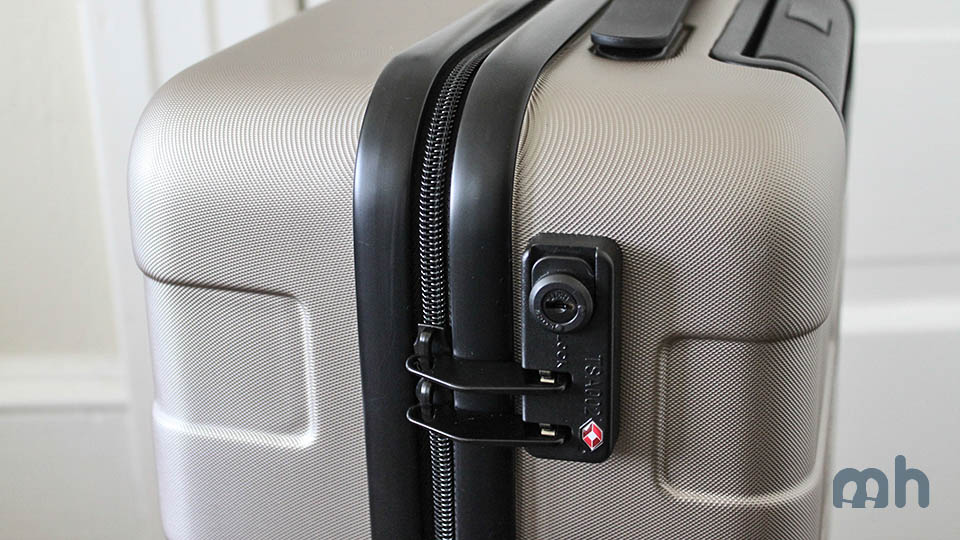 TSA zipper lock on the side of the suitcase.

There’s even a TSA zipper lock built into the side of the suitcase. It comes with two keys that open and close the lock; I’d suggest immediately separating the keys in case you’re absentminded and accidentally end up losing one. I guess it’s a problem if you happen to lose the key mid-trip. In some sense, Tumi’s number lock is superior in this regard because it uses a number code to secure the bag but maybe that’s the trade-off you make when you spend significantly less on travel luggage. The company responded, saying that should you be unlucky, it’s possible to drop in a nearby Muji store where they keep spare keys available. My fingers are crossed.

If it wasn’t clear, the suitcase is a spinner with four wheels. Though Ben Schlappig from One Mile at a Time mentioned he’s not a big fan of them because wear and tear is much higher with four wheels instead of two, things have been fine so far so far. The wheels are fully protected and screwed in, making sure they last. Each suitcase comes with a two-year warranty in case anything goes wrong.

Spinner bags are terrible for inclines but Muji’s wheel lock is especially helpful in keeping the suitcase stable. In fact, that feature may just be the best feature on the whole bag. Located on the back, it claims to keep the bag from rolling away. At first, the only thing I noticed was that if I locked the wheels, it created significantly more drag when I tried to lug the suitcase around. To my friend and I, it seemed like some weird Japanese design feature that had no basis in reality.

But it wasn’t until I began dragging the case throughout New York City’s subway system and up and down San Francisco’s hills that I truly appreciated the utility. Its spinner wheels make it extremely easy to navigate plane cabins and hallways but it also make them extremely susceptible to rolling movement. I noticed most fellow passengers in the subway or train were forced to keep a secure hand on their luggage to keep their bag from rolling away but if I turned on the wheel lock, I barely had to worry about my suitcase meandering away. Though it’s not completely perfect, it was often enough to withstand most gentle motions.

San Francisco, if you’re familiar with the city, is hills, hills and more hills. While it makes for great views, it’s also perfect for runaway luggage. I could leave my suitcase freestanding on the hill I lived on, while I waited for the airport taxi to show up and still have my hands free to do other things (okay, check e-mail). I wouldn’t have appreciated it as much as I did if I had lived in a place that was flat like Los Angeles. Chances are, if you live or travel in a flat town, you won’t see these benefits quite as much. 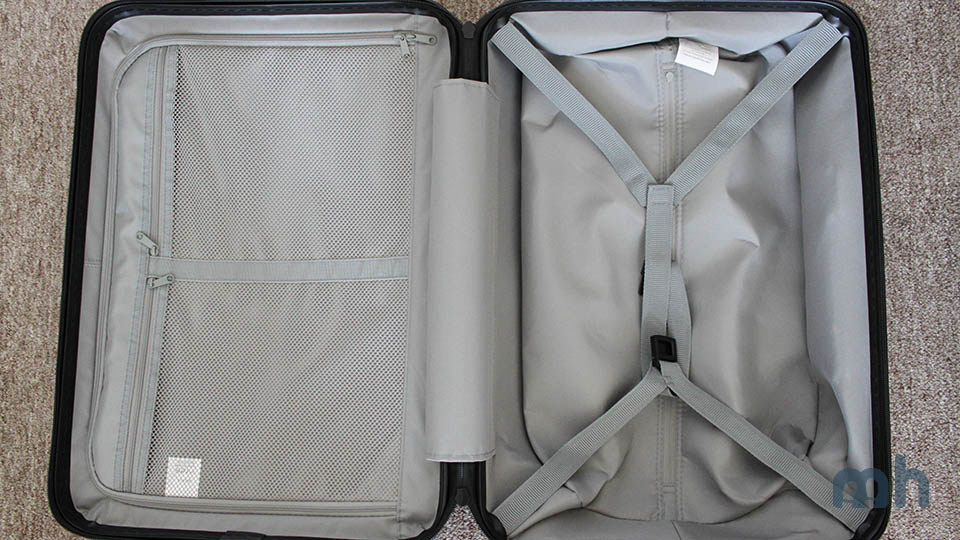 There are minor issues with the bag. Like most suitcases, the inside organizational structure of the bag is poor. Depending on how the belongings inside are loaded, it can affect the weight distribution of the suitcase when you’re lugging it around. If the bag is loaded too much on one side or on the top, it becomes uneven. FlyerTalk user freecia notes also that if you overload the valise, it can be difficult to push the handle down though that hasn’t been something I’ve encountered.

It also lacks a handle strap on the bottom of the case, which means that in order to pull it out of the overhead bin, you always have to load it top facing aisle. It also doesn’t come with a piggy back strap, which doesn’t bother me too horribly because there a bunch of numerous cheap fixes for the lack of it out there.

The handle length is also a bit short extending only about 9 inches (23 cm) past the top of the suitcase. Though I haven’t had major issues because I register at a petite 5’3, I noticed I had to make significant adjustments in the way I dragged the case around if I attached another bag on top of the luggage handle. This was a complaint that my friend from Japan—who is significantly taller at 6’0 foot—registered on his trip from Tokyo to San Francisco. If you’re around that height, I would highly suggest you get your hands on the suitcase itself in a showroom somewhere to drag it across the length of the floor to make sure its adequate.

In the four months since I’ve owned the suitcase, it’s also definitely begun to show some signs of wear and tear. It’s been straggled all across New York—more than several times—seen the inside of several buses, experienced the A & Q train intimately, rolled down a hill or two and has been run ragged in the rain in multiple cities. It’s picked up dust, dirt and a few scratches all to my chagrin. While I probably need to own the bag’s battle scars, most travelers should note that these are inevitable with hardcases and are just a badge of honor. (I do like the fact that it’s not fabric; it makes it a lot easier to wipe down the suitcase after each trip in case of bed bugs.)

That said, the Muji does wear its battle scars well. A friend from London reported her black Muji bag held up pretty similarly. I also managed to catch another passenger on a recent flight with me who looked like he had a very, very loved version of the bag. Truth be told, I was actually quite surprised, scuffs and all, over how great it still looked when thrown together with a pair of jeans and fitted shirt ensemble. Startup chic? 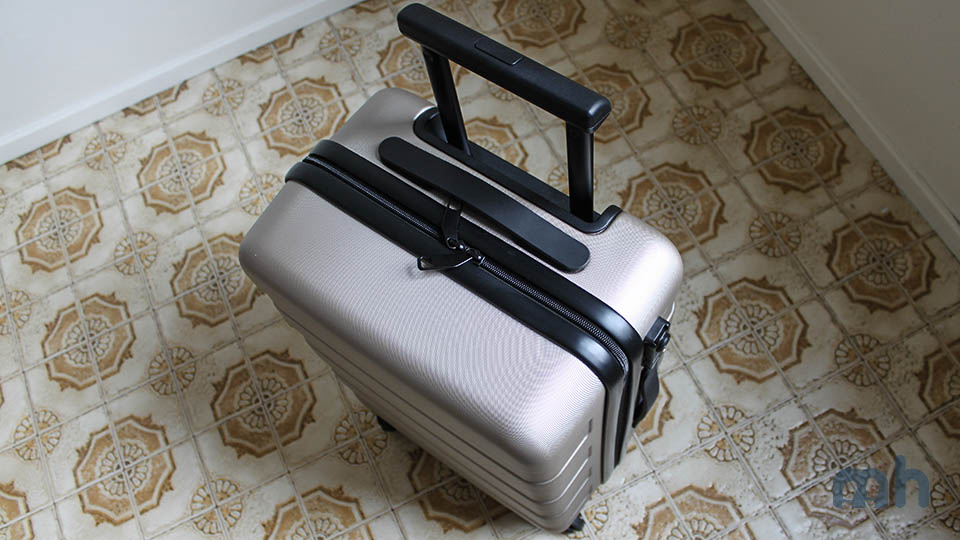 Really need to get those tiles redone.

It is worth mentioning from a durability standpoint that one Muji owner I know reported that his suitcase developed a small crack along the zipper even after traveling with the bag carry-on only for two years. He averages about 10 trips a year but other Muji owners seem to have nothing but solid reports about its durability. Flyertalk user clockmilk says that the older version of this has bag held up some 10 years plus for him. My friend from London, who travels 2 to 3 times per month and does international long-haul every other month, has admitted to checking in the bag “more than a few times” with the bag coming out strong. So far, defects and damage don’t seem like the norm.

Like all Muji products, the Muji valise is a no-nonsense suitcase that boasts a polished streamlined design. Most owners of the bag have reported no issues confusing the bag with others on the carousel due to its simple and distinctive aesthetic. It certainly helps that it’s not a brand people usually think about when it comes to travel luggage, compared to some of the traditional heavy hitters like Tumi or TravelPro. It also has the unique advantage of being one of the most incredibly unisex pieces of gear I’ve ever seen. In fact, it wasn’t until I spent a significant time with this bag that it became how apparent most of the travel market is geared toward males with its rugged black fabric.

The Muji hard case trolley is not only a budget-friendly and practical option but conscientious about its appearance. In other words, it’s extremely Japanese. At $175 plus tax—that’s at least $420 cheaper than the most well-regarded carry-on luggage out there—the Muji suitcase is a steal.

It's a great unisex, smart and stylish suitcase that appeals to both genders. The hardcase spinner trolley set offsets all the negatives that usually accompany spinners with a wheel lock that prevents runaway luggage. There's even an inbuilt TSA zipper lock all for under $200.

It would be five stars if it wasn't for the fact that the warranty sucks balls.