The Southwest Companion Pass pretty much lets you buy one and get one free all year long. Not a bad deal at all if you can handle traveling with people.

If you haven’t heard of it before, it is exactly like what it sounds: You can pick a friend or family member—or anyone that you designate—to fly with you for free on any flight, anytime, on no blackout dates, as long as the two of you are traveling together. Generally, there are no limits as long as the pass is valid. You can fly every day of the year if you want, which would be crazy and expensive, but totally acceptable. I’d also be the last person to judge.

Once you’ve got it, everything is straightforward as possible. Once a flight is booked and confirmed, all most travelers need to do is find their itinerary and add a companion for $11.20 (it’s actually the September 11th Security Fee). What does that even pay for these days? Air Marshalls? The pass is essentially valid for the year you earn it, plus the following calendar year. I originally got mine in February 2013 and it’s good until December 2015.

The key is to earn it as early as possible in the year to make it last as long as possible. Once you get it, you can designate a companion and they send you a cute card with both your names. The companion can be changed up to three total times during the entire time of the pass so it’s okay if you break up with someone (let’s be real here).

So you can take a trip with one friend, call Southwest at 1-800-435-9792 and request to switch your companion, wait until that kicks in (21 business days) and then book a flight with another companion. That does not include the first person you chose. So you can technically have 4 different companions. But since you’ve only got three changes (this includes switch backs), use them wisely.

Despite what most people would think, you don’t really need to carry the card on your person because the information is associated with your Rapid Rewards account. The key is to buy the flight before you add the companion. It doesn’t matter how the flight is bought, whether it’s with points or cash. My friend once bought me a flight with her massive point treasury; I went ahead and booked a flight for my companion with it. We both essentially traveled for free.

So how do I get the pass?

I’ll tell you straight up that it’s a bit tricky. There are two ways: flying and points. The “easy” method is to fly a total of 100 qualifying one-way segments or 50 round-trips. Remember, you must do this in a calendar year. It’s a little nuts and rarely do normal folk get the pass this way. The second way to do it is through the credit card game, which does have its advantages from time to time.

Just to clear up any confusion Southwest notes that:

Southwest does explicitly state that points from Chase Ultimate Rewards and points that are bought or received from someone else do not meet this qualification, though there’s a sly little trick around that that I’ll get into a bit later.

The fastest way to earn points is to sign up for the Southwest Airlines Rapid Rewards Credit Card. There are 2 cards: the Premier and Plus. There’s also a business credit card version for the Premier. Currently, Chase is offering a 50,000 points bonus sign-up for spending $2,000 in the first 3 months for any of its Southwest credit cards.

The Premier card has an annual $99 fee but offer 6,000 points on each anniversary with no foreign transaction fees. The Plus has an annual $69 fee and offers 3,000 points each anniversary but it does have a foreign transaction fee. If you get 2 cards, that’s 100,000 points. The promotions on average usually only last 1-3 months but now is a good time to get a jump on it since it’s the beginning of the year.

It’s possible to sign up for both the Premier and Plus Credit Cards at the same time but it is unlikely that you will get both approved, not to mention the hard inquiries on your credit score. I personally applied for the Plus card and used my Chase Ultimate Rewards to top it off.

If you apply for both credit cards—please remember to be fiscally responsible!—that leaves a remainder of 10,000 points. Luckily, there’s a cheat around this. Remember those Chase Ultimate Rewards that don’t count? Well, Chase lets you transfer points to a hotel loyalty program (I used Hyatt) and transfer those to your Southwest account. In Hyattnese, 5,000 Hyatt points give you 2,400 Rapid Rewards Points. So, to top off the 10,000 points, you need to transfer 21,250 Ultimate Rewards Points to Hyatt Points and then again to Southwest Rapid Rewards Points for a resounding 10,200 points.

Marriott also uses a 5:1 point transfer ratio or 3:1 ratio if you transfer over 30,000 points. So 30,000 Ultimate Rewards Points can be transferred to Marriot to get 10,000 Southwest Rapid Rewards Points. 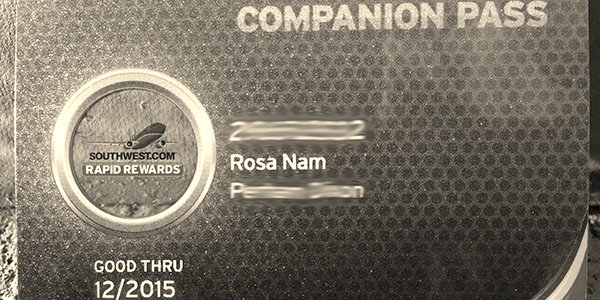 Remember, you can’t beg or borrow from a friend or family member to get Chase Ultimate Rewards points. It’s possible to share points with a significant other, partner, husband/wife, though. There have been cases of Chase shutting down credit cards and sad people losing all their points for sharing between friends and family members instead of spouses, so just be careful. I’m not going to lie, though, I did ask for points in place of gifts this past holiday season. But this time I’ll be sharing Ultimate Rewards Points with my fiancé. We’re stocking up like mad on Ultimate Rewards points to get a Companion Pass under his name when mine expires.

The benefits are worth it.

The neat thing about the credit card is that it’s possible to use the points you earn in conjunction with the Companion Pass. The points don’t go away from your account once you hit 110,000. You can use them on companion flights. On average my trips cost about 25,000 points, so that’s 4 trips I can take with two people without actually having to pay anything besides the security fee.

Even if you use the points while you build up to the 110,000 requirement, they still count toward status. You don’t have to wait until all 110,000 points are in before spending them, though you might want to wait so you can use them with the companion pass instead of flying by your lonesome. Thankfully, Southwest has an easy way to track all of this.

It’s absolutely one of the best benefits out there if you like to travel with friends and family (given of course, you guys like to do domestic travel). Though now that the AirTran merger is now in full swing, you can use your pass for international destinations like Jamaica, Aruba, Mexico and the Dominican Republic.

Besides, if you don’t have any friends, this will definitely help you get some.