Okay, I didn’t plan ahead. And when you don’t plan ahead, that means you bite the bullet and suck it up to Amtrak… or you have to be a bit more flexible and explore other options, like taking the bus. (There’s absolutely nothing wrong with the bus.)

That’s where Wanderu steps in. I somehow got suckered into the site while hunting the best deals between New York and Boston, and honestly, I should know those $1 bus tickets aren’t in my future but I saw a huge sign on the internet for them (or Google result) and couldn’t resist clicking to investigate. Turns out, it’s a search engine that aggregates all bus routes and tickets between cities. C’mon, travel tech, show me what you can do.

Confession: I’m generally not an early adopter but it’s extremely straightforward system to use. Just plug in dates and a pair of cities to search between. It’ll pull up results from all coach lines that serve that particular route with timetables, prices, etc and other nifty filters. It’s kinda great, actually, to finally get a filter or search engine that finally does this. (Like the skeptical beast I am, I totally compared the final booking price on both the Bolt Bus and Megabus website. Prices were exactly the same.) 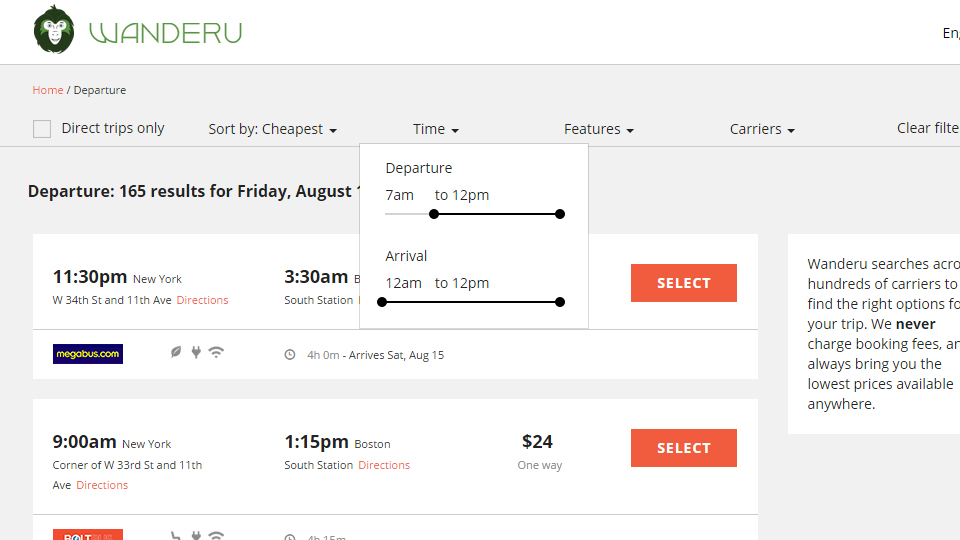 There’s no fees for booking through Wanderu, even. I hate, hate booking through third-parties, so it took a few minutes before I finally bit the bullet. Well, guess what? Wanderu seems to directly work with the bus companies so the order confirmation came directly from Bolt Bus. Score for Wanderu 1, paranoia 0.

The main downside, though, is that Wanderu only supports bus travel in the U.S. There’s some coverage in southern Canada with coverage in Mexico later to come but it’s mostly a domestic thing for now. (It’s one of those “hot new startups.” They’ve only been around since 2012.) In this Mashable report, the company claims they cover around 90% of ground travel but that’s pretty great if it stands up to ground.