Get to the right lane immediately, put the car into cruise control, turn off the music, burn some sage and hope for the best. It’s too late to stock up gas in the back of the trunk for emergencies, so concentrate on the matter at hand.

Particularly for rental cars, people tend to forego emergency kits for the road. It’s an easy oversight to make, especially if the temptation to get going on the road ASAP to beat traffic is overwhelming. Followed by driving in unknown territory—which may just be a litttttlee less populated than you thought it would be—and it’s easy to see how gas can run exceptionally low on the road.

Prepare for the worst

No more pushing 90. No more aggressive driving. Cut that shit out.

In my case, I started mentally calculating the miles per gallon on the freeway against how much gas I had left in the car. At 37 mpg on the freeway, I estimated I had about two gallons left, leaving me about 74 miles to find the next gas station. (I had already driven for some 80+ miles without one in sight.) Though the gas left in a tank can vary by make and model, once the indicator comes on, err, you know, on less.

Once the engine starts driving not so smoothly, it’s best to alert other drivers by turning on the hazard lights. Some drivers will retaliate by being douchebags but don’t be afraid to use the lights and horns if they start being jerks. You must be prepared to stop and pull off on the side of the road when you run out of gas and the situation is not going to be helped by a tailgating car.

Lights, engine and window will continue to work until the battery is drained. But buh-bye, power steering.

Goes without saying but it’s now a lifeline to the outside world. The first two things to find out are (1) where the nearest gas station is and (2) where the nearest towing station might be. After that, call the insurance company or AAA if you have a membership. (AAA Member Services Hotline: 1-800-564-6222; phone app for iOS and Android.)

Then there’s the case of remote areas where data reception might be weak. A call operator (411) should be able to advise about nearby gas stations. Though a phone without signal won’t be able to reach 911, the FCC also states all mobile carriers must provide access to 911, even if it’s a roaming signal.

It’s possible for you to be out of range of your normal provider’s towers (so it looks like no service) and to have roaming voice disabled but for the cell to still be able to talk to other towers for emergencies.

In my case, I was able to pull off at a rest stop when my gas light was already on and frantically asked someone how far it was to the nearest gas station. Seven miles more was all that I needed to make it. Information gathering, whether that comes through an online or offline connection, is the most useful tool in an emergency situation like this.

Just realize being totally SOL will require those walking shoes.

Use Honk (the app) for fuel delivery 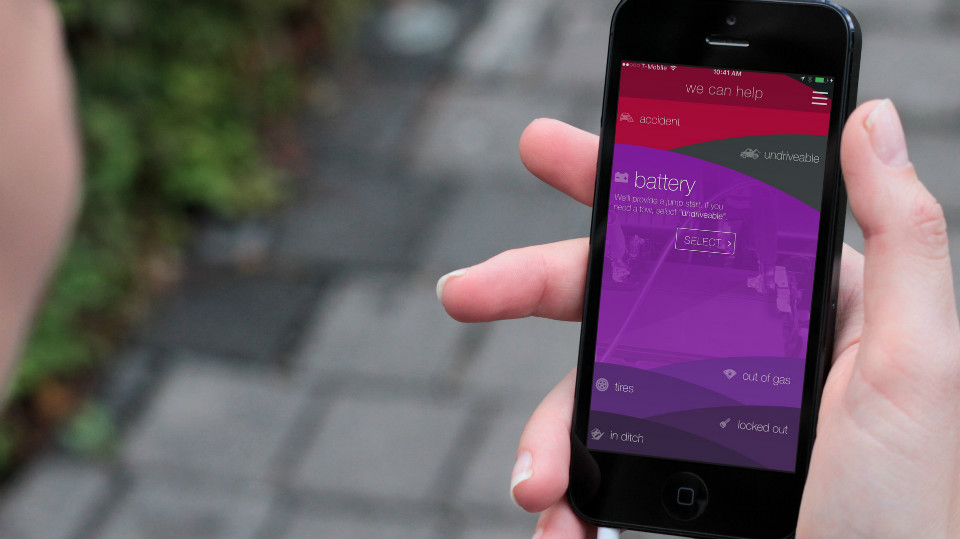 There’s an app for everything these days. But not everyone has AAA or car insurance to back them up and while I love to hate on startups, here’s one that’s a real problem solver that seems to garner rave reviews.

Honk is a roadside assistance app that allows drivers to see the cost for emergency services. For full transparency, drivers are never charged more than the estimate. It doesn’t require a subscription and (is supposed to) get help out faster than AAA. According to USA Today, this is accomplished by:

… [Using] a proximity-based dispatch that matches the closest driver to the person in need, which is different from how AAA does it, working with specific drivers for specific areas.

Drivers can pick what the service they need, set the make and model of the car and approximate location. Afterwards, estimated costs are displayed. Each price quote (for towing, being locked out in both Tuscon and in the middle of the Arizona desert) quoted me $49. It’s a reasonable cost, since being stuck on the side of the road is not exactly the best time to sign up for AAA membership and wait for that to kick in.

Use Lyft or Uber to get help

Climbers and hikers probably have an unlikely solution already waiting for them, without realizing it. Douglas MacDonald reports in Climbing magazine that camping white gas—essentially camping stove fuel—will subsist most drivers for a gallon or two until the nearest gas station:

Camping white gas is fundamentally not that different from unleaded gasoline but you wouldn’t want to fill your tank with it, partly because it costs $17 a gallon, but also because it lacks the additives that protect sensitive components in modern engines. (It’s these same additives that explain why you can’t burn automotive gas in most camping stoves. And, by the way, you’re shit out of luck if you need to refuel your gar but you cook with a propane or cartridge stove.) Burning a cup or two of white gas in your car, in an emergency, is probably no big deal. Craig had done it multiple times, and now, so have I.

Hitchhiking or walking should be a last resort

In a perfect world, everyone can be trusted. But sometimes there is just no way out of a situation without someone’s help. The Boston Globe makes these extremely good points:

If the weather is particularly wicked, consider staying in your car, with hazard lights on, until the beating rain passes. Walking to a nearby gas station might otherwise put you in more dangerous than waiting it out.

As a last option, consider enlisting the help of a Good Samaritan who’ll either offer to bring you back a can of gas or give you a lift to the nearest phone or gas station. As always, exercise extreme caution if taking a ride from a stranger. Go with your gut; if the first person who stops looks remotely unstable, explain that help is already on its way, then ask the next car.

Be aware that most cars, when they run out of gas, might have trouble restarting once the tank is finally refueled. Best case scenario, the engine might need to be cranked in the ignition a few times before the car will start running again.

Worst case scenario, the fuel pump will have sucked up dirt from an empty fuel tank and clogged up the pump or filter. In that case, it will need to be unclogged before it runs again. If that’s not possible, the car will need to be towed to a location where it can be serviced.