Map Happy » Trip Planning » Technology » Review: The Chipolo Plus Is a Bluetooth Tracker for People Who Lose Everything

Everyone knows a kid that is always losing everything. I may or may not have been that kid. But back then, this tech didn’t exist.

The Chipolo Plus is a Bluetooth tracker that can be attached to almost any object (via keychain or otherwise). Though it seems like it has a lot of potential uses, it does seem pricey for one sole function—tracking—and the fact that there are some distance limitations. Not great for tracking a suitcase that may have ended up in India when you are somewhere in Bali.

But it doesn’t mean it is completely without use, though. Prices range from $16.40 to $25, depending on the number of Chipolos purchased. Prices start at $25 for one, but bulk discounts are offered. A set of four was provided complimentary for review.

The company also offers a travel-themed set at similar prices, which to be quite honest, looked quite cool, though we didn’t have a chance to try any of them out.

There’s a seven-color palette to feed most souls here, but for the most part, they tend to be rather hipster-ish in palette. That’s fair to say, right?

Sizing up the Chipolo (literally).

For the most part, the Chipolo Plus was a bit bigger than we expected. That said, it’s not like it was so abnormally large that it was an eyesore. The biggest drawback to this effect is that it seemed a bit large to be hanging out in a wallet, though it does fit in an average card holder just fine. 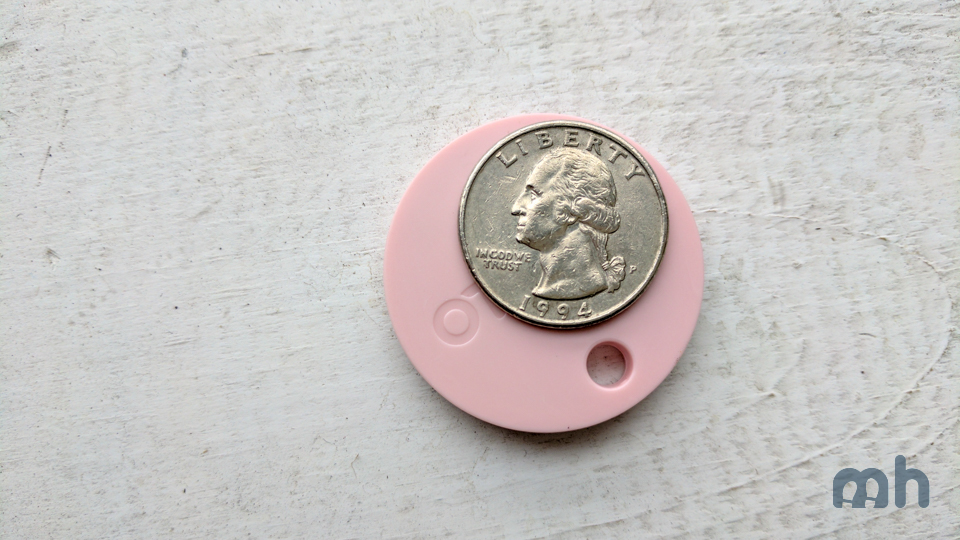 Stacked up against a quarter.

There were immediately a few items, though, that seemed impossible to use with a Chipolo. Sunglasses were one example, though a possible workaround could be sticking one in the case. No one wants to look like a doofus.

The most obvious failure though was the ability to use it with a suitcase. Location targeting works through Bluetooth, meaning there’s a small range for detection. At best, the company notes it can only extend up to 200 ft (60 m) when there is a clear line of sight from the device. Great at the airport, no so great if the suitcase is halfway around the world.

A company representative even turned us on to this tip:

[There is a] Chipolo community search option, where you can mark your Chipolo as lost (Notify When Found button in the app), if it is out of range or not connecting. This will put all other Chipolo users on the lookout for your Chipolo (anonymously) and as soon as a user picks up on the Chipolo’s location, you will be notified via email and through the Chipolo app.

The biggest downside to the Chipolo Plus is that the battery is not replaceable, unlike the regular and older versions of the Chipolo. It does last twice as long, at 12 months, which is the same time as the warranty period. Still the math prefers a replaceable battery.

A renewal program exists so it’s possible to replace a Chipolo at half off the price after a year, but no one here is excited about spending an additional $12.50 each consecutive year. Besides, the replaceable CR2025 batteries for the other versions cost $2.15—a fraction of the price—to replace.

It’s also water-resistant, but I’m not sure when I’ll be tossing my keys into a swimming pool next.

Setup is fairly straightforward. Mostly, it requires downloading the app, pairing it through Bluetooth, and then pressing the button on the Chipolo. From there, its possible to rename the Chipolo and set up an account.

There are some interesting features. First of all, its possible to turn the device “into a Chipolo,” meaning its possible to share the device’s location so that friends and family can locate it from their own devices. It requires their email in order for the function to work.

It also allows the user to see the “last seen” location of a Chipolo.

To get a brief idea of how it works, there’s a slideshow below.

Is this a necessary thing?

In our minds, the Chipolo Plus’ asking price of $25 is a bit steep for what is essentially a Bluetooth tracker. (Personally, the real price should be like $10-15 per piece, which is somewhat achievable if buying four or more. The seven-pack is a bit much, unless you’re losing stuff left, right and center.)

But all in all, the price is pretty comparable to other products on the market, like Tile. There’s always a way to justify buying a product like the Chipolo, though for the most part, I haven’t had to use it too often yet. All it does save a lot of unnecessary time that spent running around the house.

Not great for tracking suitcases over long distances (main reason why we're docking). Could be a little bit cheaper, but good for everyday absent-mindedness for sure.