Maybe it’s time to follow in Greta Thunberg’s footsteps. Also, maybe you’ve run out of money, and sailing across the ocean seems like a cheaper way to get from point A to point B.

Let’s go ahead and dispel a couple of myths upfront. It is not cheaper to book passage on a container ship across the ocean than flying. It is not possible to book something last minute, and ideally requires months of advance planning. And in case you’re harboring idealistic visions of working in exchange for passage across the ocean, that was like two hundred years ago. Times have changed.

Greenhouse gas emissions aside—oh, let’s not open up that can of worms—booking a container ship or voyage across the ocean is not as simple as heading to Kayak.com and listing a bunch of random ports.

Even booking a cruise ship, the more familiar variety, is not that easy.

But, if you’re dedicated to some idealistic notion of traveling slow and for the experience (and not scared of entertaining yourself for days on end), see where the sails takes you.

In fact, traveling by plane may be cheaper.

Though the jury is out how harmful flying is to the environment (its naysayers say there are a wide variety of other activities, like, um, driving, that contribute more to gas house emissions than traveling), one thing is at least clear: It is not necessarily cheaper.

GoNomad writes that it can average around $100 per day, if not more:

Travel by freighter usually runs between $65-$125 U.S. per day. The average of a voyage is just about $100.00 US per day, for a single person traveling in a single cabin…

There is an additional charge of about $262.00 for deviation insurance and a $12.50 customs charge per person departing or entering the country.

Extrapolate the fact that a voyage can often take multiple days, $100 per day is going to add up quickly. (Of course, do take into account that all meals and accommodation is provided for during the voyage.)

Even if you account for Thunberg’s journey (who, we should remind you, was nominated for a Nobel Peace Prize, and would understandably receive the sailing VIP treatment), her planned journey from the U.K. to New York will take approximately two weeks.

Fourteen days, multiplied by $100, costing approximately $1,400. Even a one-way flight from London to New York would only cost about $700 in high season for an economy ticket.

The ship may go to places that aren’t on your agenda. 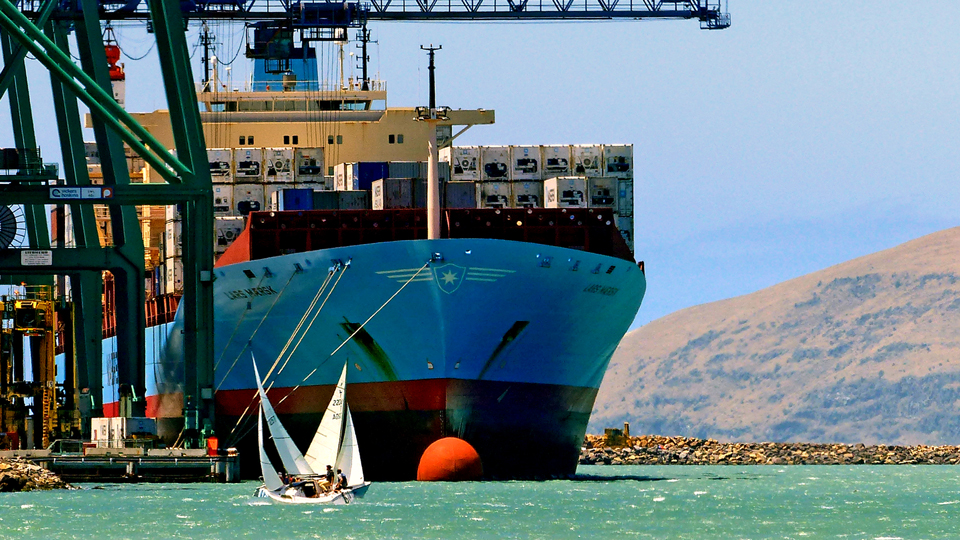 I wanna get on that beauty. (Bernard Spragg / Flickr)

Flexibility is really the key word. Don’t expect the ship to go to the usual suspects; even some of them may make wayward journeys to places like Yantian, China. (This is definitely not a cruise ship.)

Previous adventurous souls have advised others not to expect the ships to leave on time or arrive on time (there is something called nautical conditions, you know). Often, departure dates aren’t confirmed until a few days out, because, sometimes they are waiting for the cargo.

Some ship may not even have fixed schedules or ports of call! These ships are usually called tramps:

They go where the cargo is and drop it off where its supposed to go. Often, tramp voyages have passenger rooms and travelers can book them. The advantage is that you can get a cheaper voyage to a remote destination at the last minute… The downside is that you might not be able to get away from that port until another tramp comes along.

This isn’t actually a last-minute thing.

International safety regulations require that cargo vessels usually take no more than 12 passengers along for the ride. (Anything over 12 passengers and the ship must be constructed and equipped as passenger ships.)

Space is limited, meaning passenger spots can fill up fast. It is recommended to start the planning process at least four months in advance, and allotting more time for more popular routes.

In some cases, a medical certificate may be required, and there can be age limits—often excluding the extremely young and elderly—depending on the shipping company. Forget it if you’re pregnant.

Booking a cargo ship will also require getting quotes from different travel agencies and companies, making it a time-consuming process, especially from a cost and comparison perspective. In our experience, there are a couple of quotes we’re still waiting on and it’s been more than 24 hours, so don’t expect immediate results.

Befitting the method of travel, we suppose.

It is not cheaper to book passage on a container ship across the ocean than flying. It is not possible to book something last minute, and ideally requires months of advance planning.