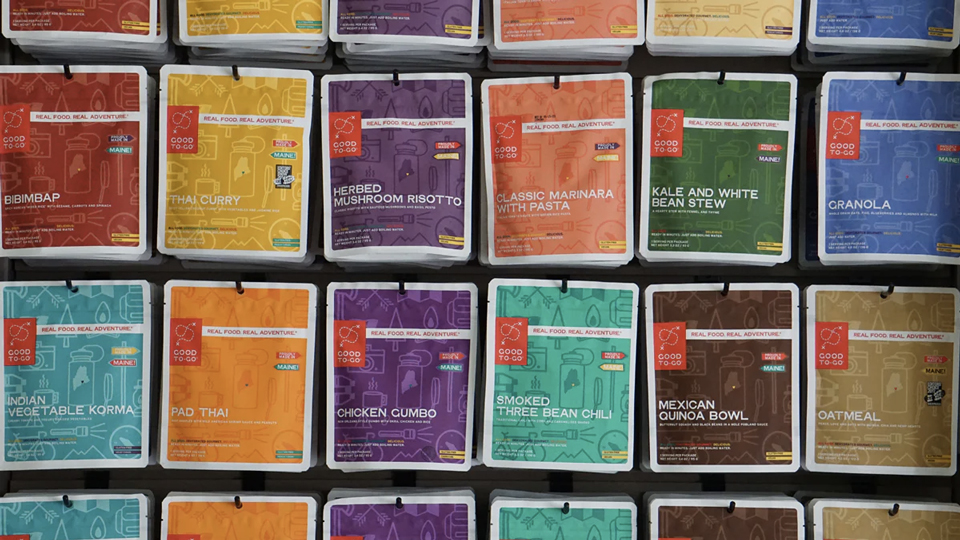 Space food? How about the entering the next frontier of camping food, where everything is actually delicious and healthy.

That's the point of Good To-Go. (Not to be confused with the food-waste saving app.) Think of it as easy packable meals designed for those times when you need to reach for something or as a fueling option on the trail.

(These are actually designed to be protein-dense, so you can exert actual physical activity and have the strength to keep going.)

In fact, what makes Good To-Go different is that Jenn Scism, the chef and founder, is a culinary tour de force in her own right. Previously a graduate of The French Culinary Institute in Manhattan, Scism began cooking at Bouley and Arcadia in New York City, both restaurants that have earned 4- and 3-stars from The New York Times respectively.

Foodies, eat your heart out.

After moving to Maine—and of course, falling in love with hiking!—Scism began Good To-Go as a way to power her hikes while eating nutritiously and well on the trail. (Or in the office.)

Satisfying all those food cravings

In particular, what we really like about the brand besides its convenience and affordability is the range of selections it offers. Say goodbye to boring granola options (although they have that too!); say hello to Bibimbap.

All of their meals just require hot water to hydrate the ingredients. See below:

(The great thing is that you can eat it straight out of the bag.)

Each Good To-Go pouch comes in single or double portions. Generally speaking, breakfasts are $6.50 and come only in single servings, though they are some of the least interesting offerings Good To-Go offers.

If you're going by serving size, it is still cheaper than a New York lunch. 😂

Most of the options have anywhere from a 2-to-4 year shelf life; and every single option is gluten-free and preservative-free. There are meat, seafood and vegan options, so there are a ton of options for each type of diet.

Like most things, it is definitely better value to buy it in bulk, though we suggest trying at least one product (to, of course, make sure you like it) before biting the bullet and going all in.

Here is the quick value breakdown if buying in bulk:

Know thy dehydrated and freeze-dried food

Believe it or not, there is a significant difference between dehydrated and freeze-dried food, and this seems to all come down to the preparation.

Freeze-drying requires cooked or raw food to be brought down to -30°C and then the water, which has turned to a vapor at this point, is sublimated, or vacuumed out. The process leaves everything bright green and pretty but the cells are broken down in the process.

Most freeze-dried ingredients are also cooked and processed separately, so when the boiling water is added, that is the first time they are cooked together.

In short, freeze-dried food rehydrates quicker but can be mushier in texture.

Dehydrating is a slow combination of using warm, 165°F air blown over the cooked meals, which are later removed and then cooled. Dehydration has a longer rehydration time but the food retains its original chew and texture.

Dehydrated is how the company prefers to prepare its products.

Though there seem to be a lot of conflicting information out there about the nutritional value of dehydrated versus freeze-dried food; the differences seem to be slight.

We are also not a nutritionist (nor are we going to interview one!), but there's no denying camping food of this caliber on our tongues.

Some Indian korma for the road that doesn't require cooking or leave me feeling bad afterward? YES, PLEASE.