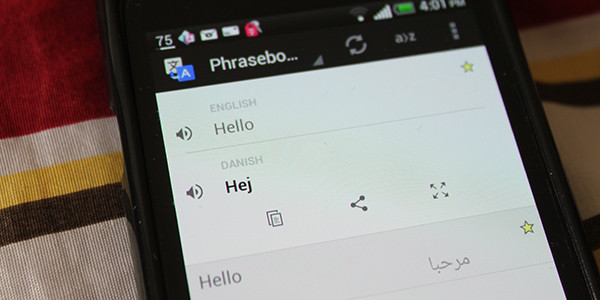 Google has got the Midas touch, doesn’t it? They’ve just added a host of new features to Google Translate’s Android app that would make any traveler happy.

If you haven’t installed Google Translate, you should probably do that, like, right now. It’s a great tool to have in your arsenal when you can’t quite understand a particular word or need to quickly look something up. In this update, Google’s rollout of Phrasebook has just hit the mobile app for Android. Google hasn’t stated when it will be released for iPhone, but hey, that's one more reason to switch over to the other side, amirite?

If you don’t know what Phrasebook is, it’s a relatively new feature that lets you star your favorite translations online so that you can pull them up at any time. Unfortunately, for a while, this was mostly limited to the web, which made it useless for any real type of practical use. This update, however, rolls out Phrasebook syncing to Android devices and stores them so you can access them offline. If you don’t see the ingenuity of that, then I have nothing else to say to you.

To add some icing on the cake, Google Translate also captures and translates text from your camera and they’ve just added a bunch of new languages to the mix. Most of the support goes to European languages, but there are 16 new languages—including Indonesian and Slovenian—to play with. Though I’m assuming you need an internet connection for on-the-go access, it is still kind of pure awesome that you don’t even have to type anything out.

The whole shebang actually works pretty well. You basically take a snapshot using the camera when you’re ready. The next part I enjoy, since it feels like I’m finger painting: you use your finger to highlight the words that you want. The following screen after that does the final legwork and will also give you the option to star it in, get this, Phrasebook.

Well, that probably explains why figuring out instructions for this Japanese jetpack did not work.