The end result of packing always looks like I triumphed in a very complicated and convoluted game of Tetris. I’m always determined to travel carry-on, so to maximize space socks are stuffed into shoes, shirts rolled and wedged in the smallest of spaces.

Except in this game of Tetris, I lose even when I win. I’m proud of my packing (stuffing) at the start of the trip but I end up having to unpack and repack at every stop. Nothing is in a particularly logical place, so I often have to take out everything to find what I’m looking for… and then it was right in one of the top layers all along. Now I know sub-packing everything, including and especially in my suitcase, is the way to go.

Packing cubes come in all sorts of shapes, sizes and materials. The TravelWise Packing Cube System 5+ Durable Set—the set we received from the company—is the pièce de résistance on Amazon for $32.95. For people that need less, the standard 3-piece set retails for $24.95 through Amazon. The spiel is that the cubes allow packers to be more organized and to compartmentalize what they pack, as well as arrive with everything protected and in place.

Clothes shifting was never really an issue because everything was jammed in solid, but organization? Unless that counts as everything being in one place (my suitcase), I needed help there. In fact, the packing cubes have made things so much easier that I’m now a proud packing cube convert.

The five set contains one small, two medium and two large cubes, made from nylon fabric. Each cube has double zippers as well as a mesh section that covers about a third of the top, allowing for breathability and letting you quickly glance into each container. Each unit also has a strap along one side for easy grabbing.

I’ll be up front saying I was skeptical of the system. I was also concerned I wouldn’t be able to pack as tightly as I liked to (read: squeeze in as much as possible). More bags, more stuff? This seemed to go against my minimalist approach to my trip. But I’ve always found the best approach to packing is when everything has its place though I’ve only applied that approach to my “personal item” bag. I don’t know why I never considered that my suitcase could be the same.

First impressions deceived me. Because the cubes have no structure of their own, they seem a bit limp and I assumed that they wouldn’t do much to help my packing. I had envisioned them to be a bit firmer, like packing Tupperwares or lunchboxes, judging from photos I had seen. As it turns out, that malleability is a big space-saving asset.

Because the fabric isn’t stiff, I was able to stuff in as much as I wanted to in each. I was also able to leave others emptier and that, believe it or not, didn’t end up being empty wasted space. By the time I put them all in my bag, they only filled the space they needed to and accommodated the others easily. The cubes work perfectly with the items and space they’re given. 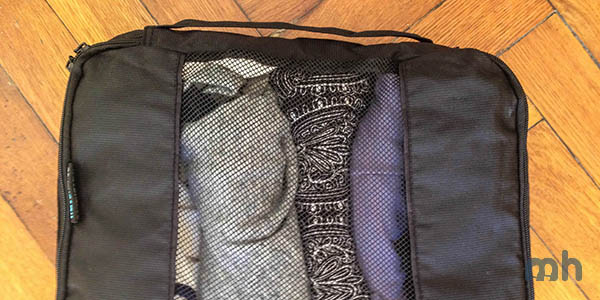 The packing cubes are also thin so I didn’t worry about losing precious packing space. It’s undoubtedly made well. The zippers zip fast and without catching and the durable, textured nylon feels like it could stand up to just about anything. I’ve already broken mine in by yanking them out and throwing them around a bit (standard packing procedures, you know) and they look no worse for the wear.

The shallow, flat cubes—as opposed to some deeper options I’ve seen—minimized the digging I had to do in order to see what I had packed. In fact, the hardest time I had was just trying to figure out how to sort through it all. Beyond making sure all of my underwear and socks were together, I wasn’t sure what I wanted to put where but I wanted to make it as intuitive as possible.

I ended up putting all my daytime outfits into a large one and my workout clothes and pajamas into another. I had one that was a (quite literal) mixed bag that didn’t make much sense—a towel, jacket, belt and some other items?—but because everything else was more logically organized I knew would just head into my accidental “etc.” cube. Some people group by clothing type while others like to put entire planned outfits into individual cubes. It’s your prerogative.

Other travel cube packer enthusiasts (aka reviewers online) seem like they like to do the whole shebang, putting everything into a cube, while others go half-in. Once I started sub-packing, I found I wanted everything to have a place, and I think that’s where they get you with the travel bags. I felt like I couldn’t have any items loose if everything else was in a cube. Unpacking was expectedly a breeze as well: it took all of two seconds as I pulled out the cubes and put them directly into drawers.

The second time I used the cubes, my space was much more limited and I found I had to have pack some items cube-free in order to best make use of my space. This took more strategic planning and maneuvering (Tetris!) but fortunately I could smoosh the cubes down and into tight spaces to fit everything again. Even having the suitcase half-packed with the cubes still made a drastic difference and eliminated me having to essentially dump out my whole suitcase to find items.

In all circumstances, re-packing also was a far easier affair than to which I’m usually accustomed. For me, it often ends up being a much-dreaded chunk of time where I sit on the floor with all the contents of my bag spread out around me, wondering bewilderedly how I ever got this all in in the first place. This time it was much, much faster and required much less brainpower. I was packing five cubes (and a hairdryer) into one bag, rather than inordinate items.

There is nothing flashy or high-tech about TravelWise’s packing cubes but they serve a basic, important function and they do their job well. That’s the genius of the product. Every single stage of packing and unpacking made my trip easy, intuitive and stress-free. So, I’ll be using mine from now until forever.