Renewing a driver license? Better make sure it is a REAL ID, or expect boarding a plane to become a hassle in two years.

In 2005, Congress passed the Real ID Act to establish standards for different forms of ID. Though it has taken over a decade for the government to enforce the program, it’s worth noting that by 2020, if your current ID is not REAL ID compliant that it will become more difficult to fly domestically.

Meaning, those that don’t have REAL IDs will need another form of ID in order to travel.

At the moment, it affects residents in the 17 states that have yet to transition over, including states like California and Massachusetts.

The biggest inconvenience for most people is that the ID renewal process won’t be as easy as an online form this time around. Instead, it will require an actual trip to the DMV with supporting documents, and also facing those terrible lines (sorry) when the time is up.

The legislation establishes minimum standards for driver licenses and IDs. Truthfully, there has been no real, clear definition on what features make an ID a REAL ID, probably owing to security measures. According to The New York Times, it is meant to stop the production of fake IDs.

The Department of Homeland Security further elaborated on this when we contacted them:

The official purposes are accessing federal buildings (including military bases), entering nuclear power plants, and boarding commercial aircraft. The look of these IDs may vary state to state but they will all meet this heightened security requirement and have a star in the upper right hand corner.

Though REAL ID standards went into effect on January earlier this year, 17 states have been granted an extension until October 1, 2020. That’s like a full third of America that hasn’t quite gotten with the program.

Highlighted in yellow are the states that are affected. 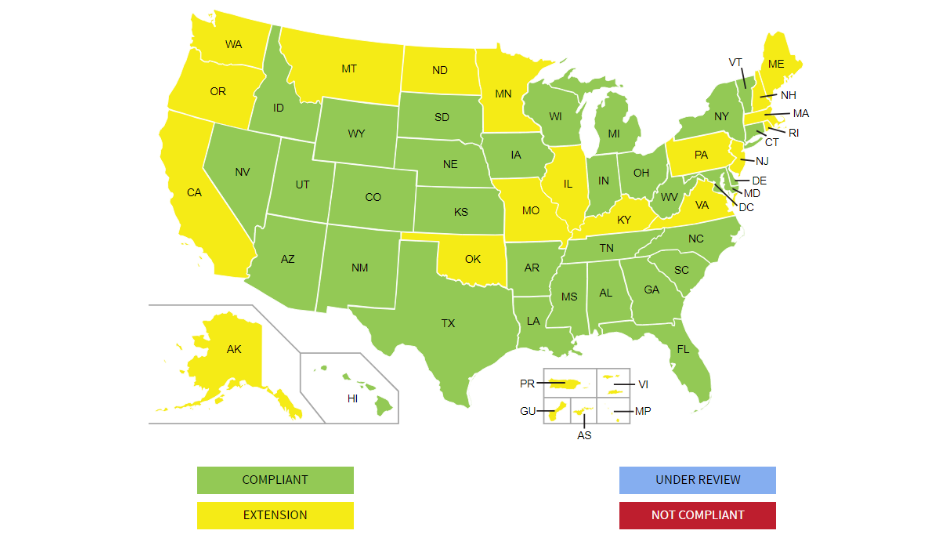 Four U.S. territories Puerto Rico, Guam, the Virgin Islands and the lesser known Northern Mariana Islands have also filed for an extension, whereas American Samoa is the only territory that’s not compliant.

(There are five U.S. territories in addition to the 50 states. That also wraps up the geography lesson!)

The days of boarding a flight with a Costco card seem to be at an end.

Expect longer lines at the DMV (yes, you have to show up in person).