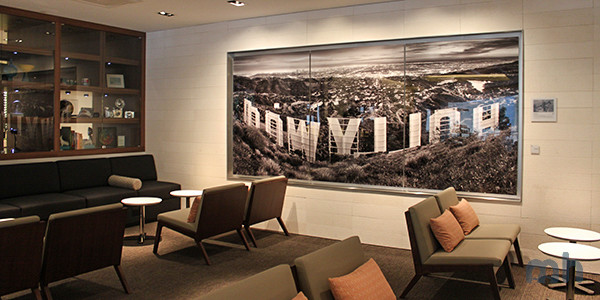 I hate to get all excited, but North American lounges generally suck. I guess I have to take that back when I’m sipping champagne on the outdoor patio of the Star Alliance lounge. Now this sunset is killer.

Seriously, there is actually an outdoor terrace. The 18,000-square-feet lounge will be open to any business class or Star Alliance Gold passenger flying through LAX’s Tom Bradley International Terminal starting on Wednesday. Unless you happen to be flying on one of the six Star Alliance airlines that won’t be operating in the new international terminal (which comprises of Air Canada, Air China, Avianca, Copa, United and US Airways), I think most people will probably be pleasantly surprised.

The actual space—which is designed for 400 people—is definitely the lounge’s main highlight. More specifically, the star feature is definitely the outdoor terrace and patio that overlooks the tarmac, which is pretty unusual for most lounges. It also even has BBQ pits installed out of all things, if you've actually got time for that before your flight. Even the indoor balcony seating space that overlooks the recently renovated terminal is inspiringly great, showing off the terminal’s newest video installations. There’s definitely even a couple of showers available for those who want to quickly freshen up or for those who have been deprived a little bit too long in United’s shitty lounges. 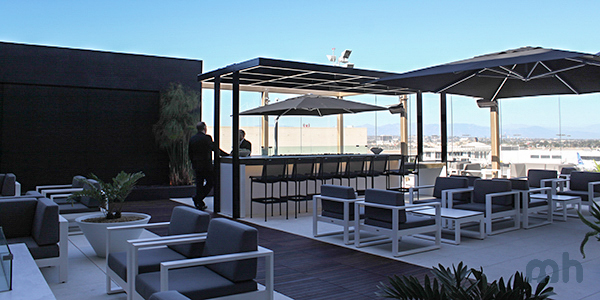 The outdoor terrace, which features a BBQ pit. Drool.

The lounge, of course, comes situated with Wi-Fi along with complimentary printing, fax and copying for those people who are looking forward to turn the lounge into their personal home office. Though I didn’t see any devoted workspaces, that’s still one step above a Starbucks, right? Get this: If you don’t happen to have your computer or phone with you, the lounge will provide you with a tablet to borrow on request. Hey guys, I need to borrow one, like right now.

If the food at the media preview is any indication of what they’re going to be serving on a regular basis, then I may have to start getting to LAX a whole lot earlier. There is a whole assortment of cold and hot finger foods including sushi (maki and nigiri), a few salads, dumplings, wontons, shrimp cocktails along with fresh fruit, cheese and nuts. Soup is also available in the form of soba and udon, though it was just okay. For those who feel like testing their diabetes tolerance, macarons, cakes and other delicious things also abound in no shortage. (I’m going back for a second round.)

In comparison with the rest of the business lounge, the First Class is actually pretty small — substantially more so. If anything, it’s just a slightly more intimate space for a little bit more privacy. Unfortunately, it wasn’t fully functional yet (as in there was no food), so I can’t say what sort of food will be on hand when it goes into operation. Other than that, it wasn’t clear if there would be any specific amenities exclusive to first-class passengers. 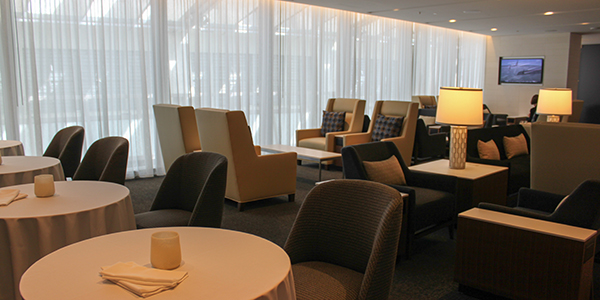 The first-class section in the lounge is actually pretty small.

As most international lounges go, this is pretty typical in comparison. As far as most lounges in North America go, this one is pretty frickin’ stellar. Seeing as I haven’t been to every Star Alliance-operated lounge in America, I’m going to take a stab in the dark and say it is probably better than about... 90% of the North American lounges currently out there. I suspect though that it may be due to the fact that it is Air New Zealand-owned and operated. Though I'm still dying to visit certain lounges like the Turkish lounge in Istanbul, I enjoyed my fair share when I lived in Asia. And I’ve definitely had my fair share of Milano cookies.

The entire lounge doesn’t officially open until September 25, where its operating hours will run from about 9 am to 1 am for its summer schedule. It is then supposed change to an earlier opening time sometime in late November, depending on airline operating schedules. (I only managed to glean these rough estimates from lounge staff operating the event, so these may not be the official operating hours.) 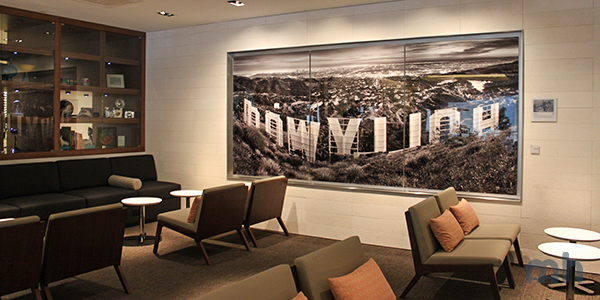