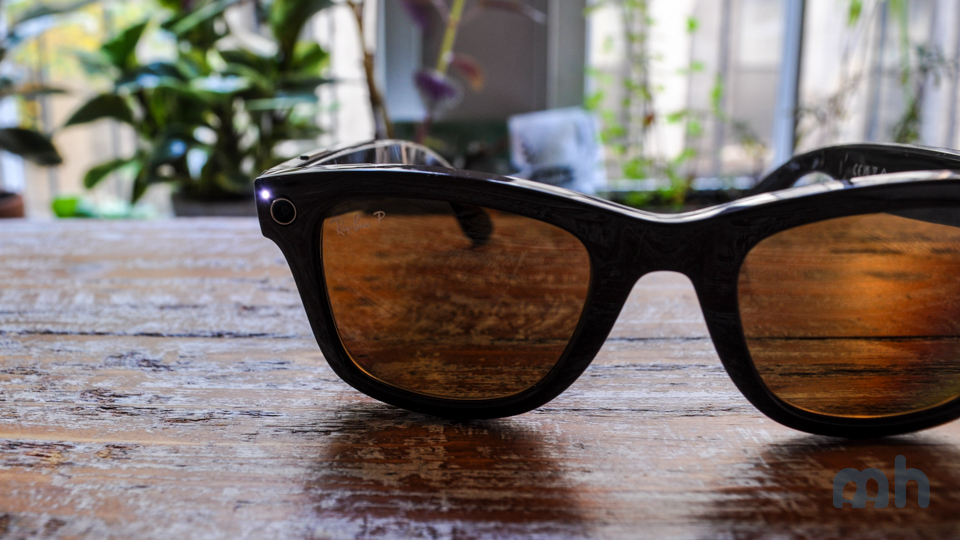 Do you need a pair of sunglasses that have built-in Bluetooth, camera, and takes phone calls? No, you do not. Is it hella fun? Absolutely. James Bond would approve of these.

The Ray-Ban Stories Smart sunglasses is just another tool that you may want to pack in your photography arsenal for the hobbyist photographer. If you love droning or tinkering around in SnapSeed, consider adding these sunglasses into your arsenal.

Developed in conjunction with Meta last year, Ray-Ban Stories Smart sunglasses traditionally retail between $329-379 depending on style. They come in three shapes—Round, Wayfarer and Meteor—ranging from four to eleven colors each so it’s also about making sure they look like they’d actually be sunglasses you’d wear.

To see how we'd actually like them, we brought them on an Iceland trip, along with our drone and 900ish other cameras. This is the best thing about them: They definitely didn't look like "smart sunglasses," and we preferred them that way.

(It is also possible to make them prescription!)

Just keep those expectations in check: These sunglasses won’t deliver the camera quality that photo-centric devices can deliver, or even match those of a Google Pixel, but for pure fun value, they are priceless in gold.

Besides, after a while, everyone will refer to them as the “spy glasses.”

In some respects, they are a great photography tool: Though it is possible to easily resort to a camera on the phone, these are completely hands-free; and in some essence, reduce the need to go Go Pro.

They definitely beat reaching into a bag for your phone or into the back pocket every time something interesting happens.

Not actively snapping away? Put them on top of your head.

But, like most new tech, it’s not a perfect device: The camera and video quality doesn’t hold up in every situation, and you also run the risk of looking like that jerk who refuses to take off his sunglasses indoors. However, it’s a small price to pay for being a celebrity. 😎

Taking pictures and video with the sunglasses

First off. It’s a device.

The power button is on the left side of the glasses; the main button for capturing audio and video is on the right side.

The sunglasses last up to 6 hours on moderate usage and up to 3 hours with continuous audio streaming and voice assistant. These claims were consistent with our experience, so we’d suggest just keeping the sunglasses on and recharging daily.

According to Ray-Ban, it's possible to fully charge the glasses to 100% in 70 minutes in the charging case. They also be quickly charged to 50% in 30 minutes.

In any case, we'd suggest using them like a pair of AirPods throughout the day as necessary. (Here is the official FAQ for burning questions.)

The mechanics of the sunglasses work like this: Look at what you want to capture. A long press will constitute taking a photo. A short press will start a video, and another press will stop video recording.

There will be sounds to accompany what type of media is being captured, and it generally takes a day or two to pick up the distinct sounds and what they mean.

Through Facebook View, there is the capability to set maximum video lengths of 30 and 60 seconds, though it is possible to take snippets shorter than this. These videos are recorded in a 1:1 square ratio, which are gasp!, perfect for posting on Instagram.

For extra extra-ness, it is also possible to use voice commands through Google Assistant and the requisite Facebook View App to take a photo or video. (Though we initially scoffed , we realized this was a highly useful feature when we were mountain biking through the south of Iceland.)

In terms of privacy, both Ray-Ban and Meta apparently has thought about this (though we recommend being upfront with the peeps that something is happening): On the front side of the camera, there’s an indicator light that will flash if a photo is being taken, and stay on while a video is being recorded.

If you’re keen, it is possible to listen to music or take a phone call via the sunglasses, but given how much you’re apt to annoy and confuse everyone around you, we’d say leave it.

Yes, the Facebook View app has to be downloaded. It's an annoying step.

The Ray-Ban Stories sunglasses sync to Facebook View, and these are where are all the photos are offloaded from the sunglasses to the device, and/or saved to your phone.

Facebook View also allows you the ability to sync voice commands to the sunglasses, which at *first* we thought was a little kitschy and kooky to command the sunglasses to record via voice command, but it was only when we super-focused on surviving through a mountain biking crash course how useful this feature would be.

(Otherwise, it's a serious one-hand deftness and true test of our biking skills, which turns out, needed a serious upgrade.)

It is only our deepest regret we didn’t take them with us flying off a zipline. In this way, the Ray-Ban Stories sunglasses are sort of like a Go Pro on crack.

No, the Ray-Ban Stories sunglasses are not going to deliver DSLR-quality photos.

But for Instagram and TikTok where everyone is just staring a tiny handheld device? They’re pretty much perfect.

That said, the sensor used passes muster for most social media platforms; for professional editing, they are bit of a dud. If the photos are uploaded to a bigger screen for editing, it will become readily apparent to the naked eye  will be some serious pixelation.

For an idea of how the videos actually fared, check out this gallery below (enter the raw photo dump, so take that as you will):

The sunglasses also don’t perform too well in indoor or low-light conditions, lending itself to a yellow exposure for the majority of these photos.

The sunglasses also lack video stabilization, so video captures can be a tricky element. Though they are fine standing still, it is not suggested to use these while moving; more or less, we would choose another device, like the DJI Osmo Pocket, over this.

Here's are two quick videos shot from our trip in Iceland:

To see the full range of our raw video footage, check out this gallery. Instagram reels, much anyone?

Storage capacity on the sunglasses

For some reason, if you don't have the Facebook View app installed—or don't have enough space on your phone—the Ray-Ban Stories sunglasses will store the photos and videos on the sunglasses until they are offloaded to a device.

They can hold up to 4GB of storage, or approximately 30 30-second clips, or 500 photos before the sunglasses reach capacity (the sunglasses will tell you).

In our experience, that was enough given how much footage we were shooting while we were in Iceland (with wild abandon). The videos reduce the capacity a little bit, but given how excited we were to review the pictures at the end of each day, chances are you'll clear the capacity before this happens.

Once the sunglasses reach capacity, the sunglasses will deliver a "capacity full" message, and a feeling of existential death will creep into your pysche for not being able to capture that. *very cool* glacier.

Either way, the Ray-Ban Smart Stories sunglasses may make you change your view on smart sunglasses, somewhat literally speaking.

Do you need a pair of sunglasses that have built-in Bluetooth, camera, and takes phone calls? No, you do not. Is it hella fun? Absolutely.

The Ray-Ban Stories sunglasses is just another tool to pack in your photography arsenal for the hobbyist photographer. What they lack in camera quality, they make up for in Instagram friendliness, ease of use and pure fun!

James Bond would approve of these.

This product was purchased by Map Happy.