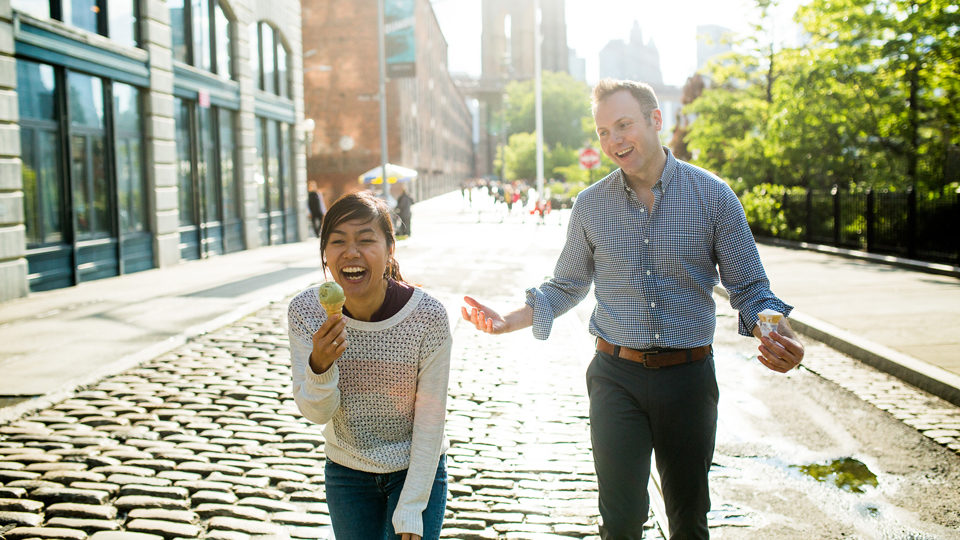 I can get a great photo of someone else. But they can't take a great one of me. Or a great photo of us both. How about the first time I take my daughter to Disneyland? (I don't have a daughter, but I would definitely want pictures of that.)

Nicole Smith founded Flytographer back in 2013 as a travel photography concierge service, which is now available in 191 cities throughout 63 countries. Prices start at $285 USD for a 30-minute shoot, so it's not the cheapest of services, but it is almost certainly a *convenient* one, and has a lot of appeal for couples, groups and solo travelers (who may otherwise have to resort to terrible selfie shots).

Like most people, I am a big fan of photos (clarification: good photos of myself I can post on Instagram). Let's face it, we all love indulging our inner diva from time to time.

Deal alertThe company also provided us a reader discount for $25 off with MAPHAPPY25. There is no expiration date.

Breaking down the photo packages

But, unfortunately, no one was getting engaged here.

The most important part, really, is to determine Flytographers' overall value. That's done by calculating the price per hour cost, which ranges anywhere from $291.67 to $500 depending on the package. It's also the best baseline for determining Flytographer's price-to-value ratio against other private services.

It should be noted that for every 30-minute extension, there's a $150 fee. It is generally more expensive to extend a 30-minute session to 60 minutes, or a 2-hour shoot to three hours. For all of the other timed shoots, though, you're not really paying more or less for extending.

It's a rather straightforward process 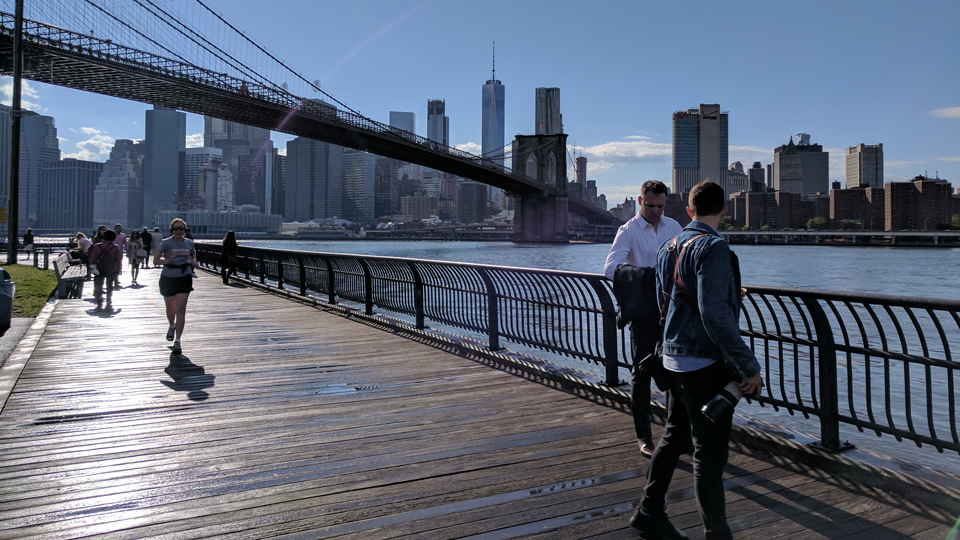 Behind the scenes. Jeff and Johnny, both right, hard at work. (Map Happy)

The booking process is simple. Flytographer requests a few pieces of information through an online form: How natural you are at the camera, what visual tone or “mood” you'd like, and of course, any preferred locations (though there are a few options to select from).

In this case, we were happy to let Flytographer know we were total noobs.

Once the form is submitted, a Flytographer concierge will arrange the photographer and plan for any pertinent details. Time and location are set, phone numbers and hotel addresses are exchanged (for logistics).  The company recommends booking at least seven days before traveling; and offers a 90% refund if cancelled at least 48 hours in advance.

On the day of the shoot, our photographer, Johnny Wolf, met me and Jeff Wilser, author of Alexander's Hamilton Guide to Life, in downtown Brooklyn. He gave us the standard package “tour”—okay, we're both Brooklynites—since participants are actively encouraged to explore during the process.

Most importantly, Wolf was a natural at directing the two of us, though things got particularly nasty with pouring rain in the middle of the shoot. Fortunately, cameraman extraordinaire was kind enough to take a big giant pause in the middle of the downpour, until things eased up. Once things let up, we moved on to the second and final location.

The company makes it pretty clear it has a weather clause, as well as it should, since no one can control Mother Nature. (Wolf offered to reschedule the second part of the shoot if the nasty downpour continued, that should be a testament to both Wolf and Flytographer.) 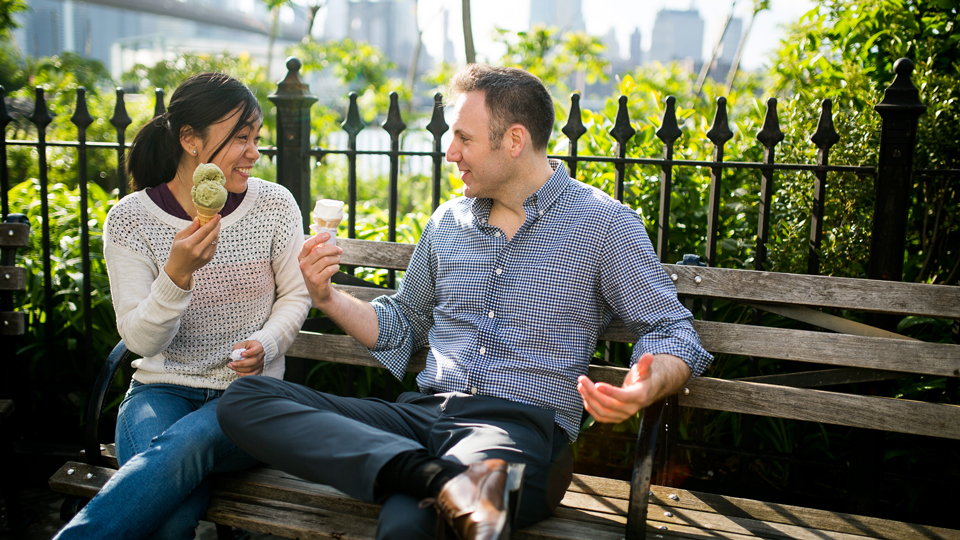 The cheesiest couple shot replicated for your benefit. (Flytographer)

Things to know before booking

First of all, I don't know what anyone booking the 30-minute session of Flytographer is smoking, but that's way too short for any type of shoot, especially for people who don't spend time behind a camera for a living (models). I don't know about you, but I'm not Paris Hilton.

For most people, that's right about the time you start loosening up and actually start looking like a normal person without a nervous tick on your face.

In one recent conversation with a friend about her engagement shoot, she remarked she spent about five hours to only get five or six shots that she really liked. In contrast, we felt about the same amount, but crammed into a 60-minute shoot.

Perhaps it was the magic of our deft photographer, but Flytographer seems like it does an excellent job of curating visual talent.

Flytographer also limits the number of shots you're able to receive (though we received 40 for a 60-minute shoot), so if you're looking through the roll with your photographer on set, realize that you may receive a very edited set. 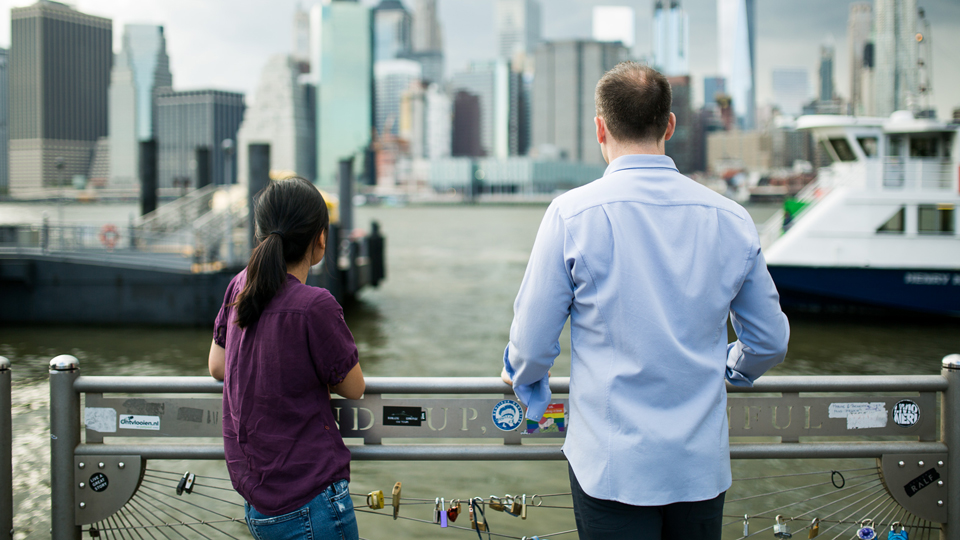 Staring deep into the eyes of Manhattan. (Flytographer)

The difference with hiring your own photographer

Here's the crux of it: the cost of hiring a local photographer can be substantially cheaper, assuming you're not trying to hire a guy who has shot for The New York Times.

Wilser noted he once paid a local photographer about $800 ($160/hr) for about five hours' of headshot work previously, and another professional Brooklyn photographer noted his price for a three-hour photography session was $700 ($233/hr).

These prices are significantly more competitive than Flytographer's price per hour, which clocks in at $325 at the lowest end. Meaning, the service could be anywhere from roufghly 25-82% more expensive than hiring a photographer independently.

(Expect to pay for it by sorting through and contacting tons of individual, local photographers. Depends on how you value time.)

There's also local wages that factor in around the rest of the world. The cost may be astronomically high for a NYC-based photographer, but in many parts of the world, other people make do on much less (like way less).

Though there is a lot more QA work in looking for a vacation photographer, it's possible to get it at a fraction of the price in Bangkok.

In terms of rights, Flytographer makes it clear the photos are for personal (not commercial) use. The photographer keeps the copyright and while it's not a big deal, most independent photographers are often happy to release full rights, as well as share the entire reel.

Wrapping up the photo shoot

Regardless, the results were pretty satisfactory, though we found ourselves wishing we could see the full results. Getting the best bang for the buck requires a compare/contrast in regards to hourly cost, but Flytographer's full-service program may be worth it for those not wanting to deal with the hassle of a potential language barrier.

(That tends to be an overblown fear, though, so it mostly depends on how much time you want to find an English-speaking photographer on your own.)

*60-minute shoot required in some cities.

Flytographer is super convenient in terms of vacation photography, though it can be more expensive and more restrictive in terms of usage than if you just found your own photographer.

(Go with them if you can't figure out what makes a great photo.)

There's also a promo code for $25 off with MAPHAPPY25. There is no expiration date.