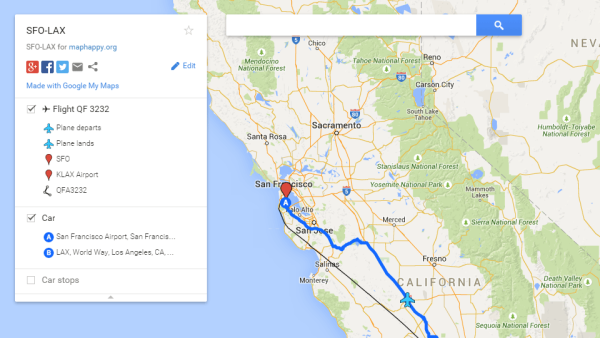 To test out this particular scenario, I actually tried to race a plane in my tiny little car. Talk about reenacting the tortoise and the hare.

Some flights are so super, super short that they've become commuter flights. Perhaps one of the best well-known ones is the LAX-SFO route, which routinely clocks in at an 1 hour and 30 minutes. But by the time all that time waiting at the airport is factored in, is it just easier to drive?

Okay, not totally. Some distances are so short like Philadelphia to Newark that its a no-brainer. But for longer trips like Los Angeles to San Francisco, the lines blur a bit more. In general, though, it seems like the sweet spot about where most drives and flights break even are at the five-hour mark. This doesn't even account for the "hassle" factor: sometimes I just want to browse the terminal, read a book and wander off the plane*. (*This is a lot of the time.)

I had the prime opportunity to test SFO-LAX recently. The rental car needed to returned in Los Angeles but my friend had already bought a ticket back to LAX. So I was going to drop him off... and see if I could beat him back to LAX. May the best player win.

To make things fair, we kept the conditions as realistic as possible. For me, that included a Starbucks break (caffeine!), bathroom (i.e. ok, I wanted Taco Bell) break and a final gas break. There was no way I was missing out on an opportunity for some required fast-food, road-trip eating for this one.

On the flip side, I dropped M* off at 2:19 p.m., which was just about two hours before his Qantas 3232 flight departed at 4:45 p.m. We  were beginning our journey at exactly the same time.

And while the winner you guessed would win won, it was ultimately surprising that the margins were somewhat close as they were. The flight took a total of 4 hours and 17 minutes (257 minutes) from the minute I dropped him off to the minute touchdown was reached on the tarmac. (This doesn't include the time to reach the gate, which is usually another 10-15 minutes.)

That means the plane beat the car by 2 hours and 25 minutes or 145 minutes. I guess there is a reason why I always sucked at Mario Kart.

Keep in mind, though, this particular drive avoided peak L.A. traffic and included a detour around a section of the 5 that was involved in some serious construction work in Kettleman City, Calif. (This particular route took about 40 min instead of the estimated 1-hour and 37-minute slowdown Google Maps estimated.) QF 3232 also suffered a 56-minute flight delay at SFO, so as far as I'm concerned, the delays canceled each other out.

The interactive Google Maps shows the exact driving route of the svelte red Kia Soul I drove and the exact flight route of QF 3232 as it took off. The flight departed just after I reached Coalinga, Calif. (more importantly, just as I finished stuffing a spicy potato taco down my throat and was swinging back on the ramp for the 5) and arrived 55 minutes later before I reached the gas station in Buttonwillow, Calif., right outside of Bakersfield.

It's worth clicking around on the map to see the exact flight path the plane took but the markers of plane departure and arrival are listed out on the driving path for easy visualization. (So are the car stops, if you'd like to see where I ate. I somehow doubt that's of interest, though.)

The cost of flying versus driving

It just wasn't fair to do just a flying or driving comparison without taking into account the cost of each method of transportation.

The most interesting thing was that it wasn't cheaper to drive rather than flying. One-way flights between the two cities can go for as little as $59 and the gas alone for this particular trip cost $51.79. Once I factored in the daily cost of the rental car, it jumped up to $69.33. Driving is only worth it if there are at least two people in the car.

So, basically, the consensus of all of this is that next time, I'm flying. 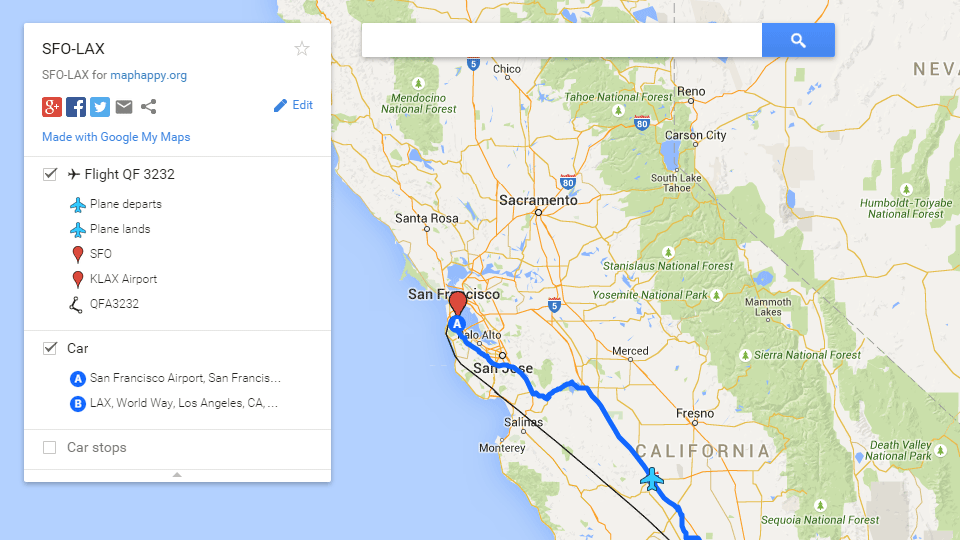