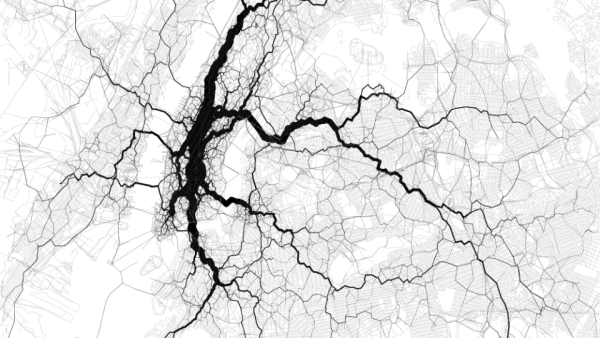 I rarely (okay, never) have Internet connectivity when roaming on a trip, which is when seeing my location slide along on a map would be especially helpful. I also don't end up getting an old school paper map either, so I leave myself ill-equipped to get my bearings. So, on a recent trip I decided to take some of the top-rated free offline maps apps for a run—well, walk, really—with my iPhone and pick my favorites. Among the ones I decided to test were Google Maps, Galileo, Maps.me, Triposo and TripAdvisor City Guides.

The only prep needed for a day of wandering can be a quick download while still on WiFi — which, I'll admit, I almost forgot to do. These work hella well and all offline, but they do, you know, need to be downloaded first. Without anymore ado, these were the ones that fared the best. 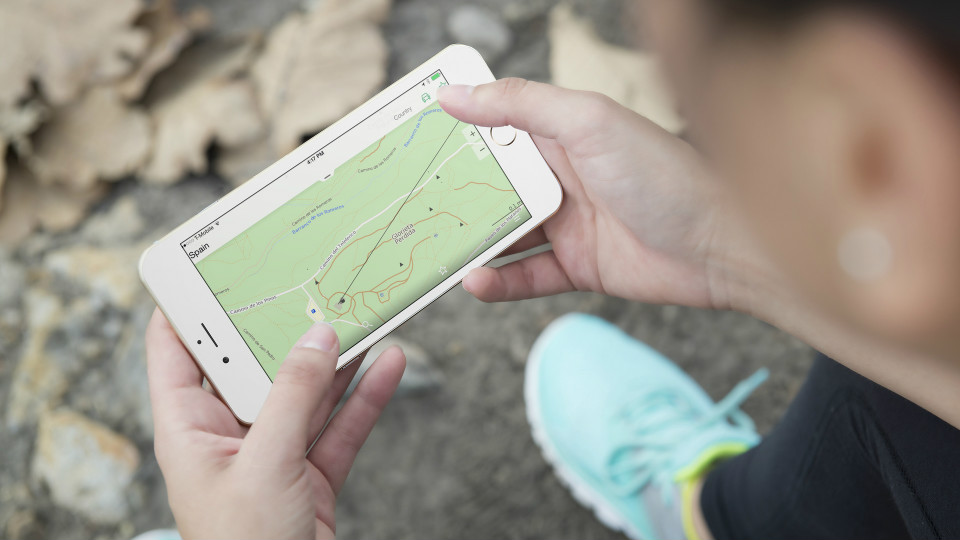 Maps.me are for those that need a hardcore map. (Placeit)

This was my favorite because I felt like it was created exactly for what I was using it for: walking around a city. The app wasn’t going to tell me where the top-ranked restaurant was within a mile radius (see Triposo below) but I didn't want that in this case. I knew where I wanted to go—what my destination was—and it was perfect in guiding me there and showing everything clearly in Madrid.

What I appreciated most about Maps.Me was the level of detail. I pulled up the app in Madrid's urban Buen Retiro park, which would be off-roading, Wild Wild West territory for most apps. It had every single fountain mapped, even the tiny sputtering ones, as well as the dirt walking paths I was treading on. Thanks to the map I led my group out of the park on the most direct path toward the Prado Museum located back on the gridded city streets. (We were in a hurry because entry actually is free on weekday nights between 6 and 8 p.m.)

Maps.Me includes all possible attractions a tourist might even want to glance at, down to statues. Practical spots like pharmacies also are mapped, as well as public transit stops. I just want to stress that we are talking serious detail with this app: even street numbers and one-ways are denoted. I easily could have used it in a cab to make sure I wasn’t getting taken for a ride. 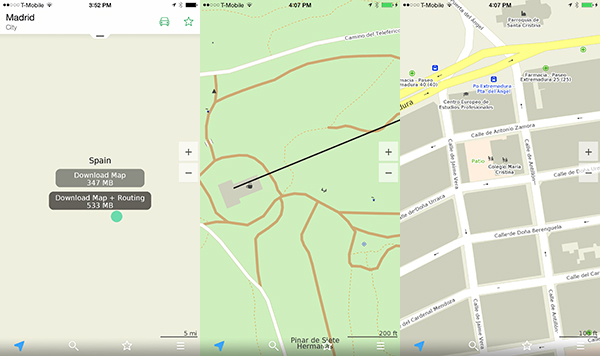 The search function, which also works offline, was impressive in that every possible place seemed to be listed and came complete with suggestions. And that’s particularly helpful when attempting to spell in a foreign language.

It never failed me, either. I could navigate without a hitch or freeze, zooming in and out and rotating the map while still satisfyingly seeing my little blue presence, cardinal direction indicated. It also helps that Map.me is available seemingly in every corner of the globe. In fact, users commented about using it on hiking trails and the webpage claims to have even the “tiniest island” mapped.

For more independent travelers who know in general terms where they want to go and want a detailed map that works extremely well, this is a dutiful companion.

Triposo for a map app that doubles as a travel guide. 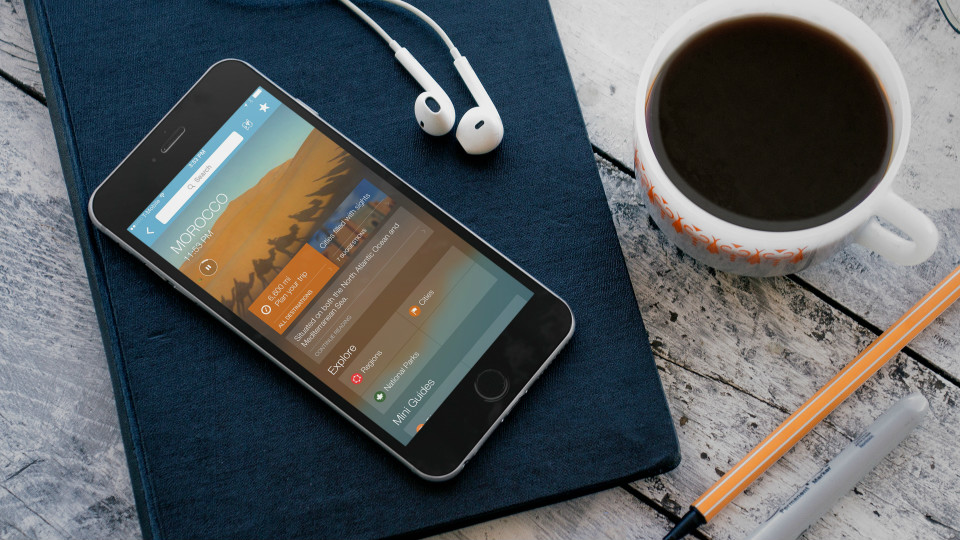 Triposo is guide plus maps. (Placeit)

The Triposo app is designed such that you could do pretty much no prep for a destination but still somehow feel like you’ve got a handle on a place (or get a handle on it quickly). Because that’s exactly what happened when I was in Marrakesh, Morocco, when my plan of action was to place ourselves in the pulsing, touristy center of town and hope for the best. I just wanted to be seeing, drinking and eating some awesome things.

In all honesty, the maps part of this app is more a supplementary feature to the app itself, which functions as a curated, crowd-sourced travel guide. The home screen includes local time, weather and currency information and has exploration options for the pillars of any trip, including hotels, museums and nightlife. There's also the prerequisite introductory destination intel to welcome you there.

The map function places you as a small purple circle, the line in it which points due north. All street names are listed on the map and recommended spots are marked with an icon: bed for hotel, martini glass for bar, etc. That’s as detailed as the map gets but for relaxed, aimless wandering I thought it was fine keeping me clued in and oriented, though in the middle of the packed, principal square Jamaa el Fna it didn't give me much detail. (It’s probably hard to map the scene of snake charmers and other wild attractions.) 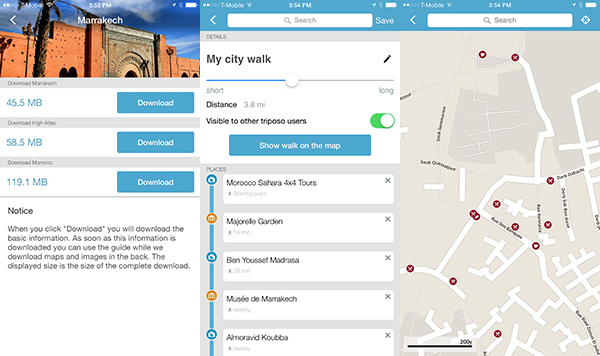 Clicking on each icon pulls up an entry and clicking the “directions” tab gets the app to calculate the best route. The amount of information provided for each listed spot varies from something as simple as “this is a restaurant” to museum information with hours, history and entry cost. The information is culled and rated by Triposo’s 6 million travelers and with background information (culture, history) pulled from places like Wikitravel.

I tested the app out back in my Buenos Aires hood to see just how accurate I thought it was back home. While a nearby restaurant popped up instead of a bar icon, I still would give the selection presented my stamp of approval. In short, I would throw my faith in the Triposo app to lead me to a good, hot meal somewhere in the world.

One particularly nifty feature was the “City Walk.” It uses the current location to map out a walk ranging from 1 mile to 7.6 miles (your choice) that includes recommended sightseeing stops. The 4-mile walk I drafted in Buenos Aires included 10 ambitious stops at museums, monuments, libraries, and cultural centers but it looked pretty good and well calculated — especially for what was essentially a free tour.

For those wanting to wander without much direction but who are looking to explore—or those who land in place without knowing anything much at all and want to set out and take it in right away, this is an ideal app partner.

And there's also Google Maps, which can be niftily enabled to be used offline. 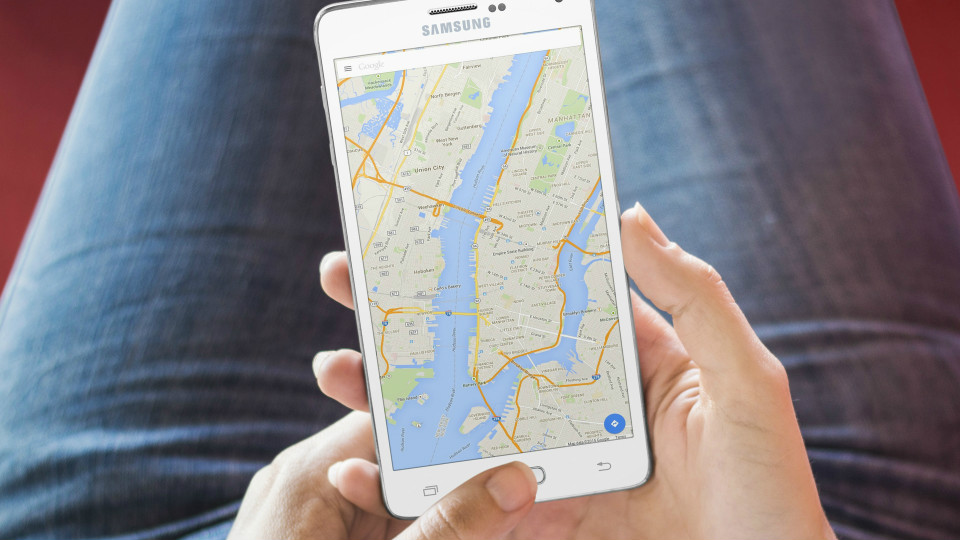 Google Maps deserves an honorable mention, just because they've managed to do everything else so well. Unfortunately, they've hardly managed to optimize offline-friendliness (the one thing that's a prerequisite for traveling) either for the Google Maps app or their custom maps. There's some barebones capacity to save offline maps but their reach isn't quite as extensive as Maps.me, though. At least not yet. 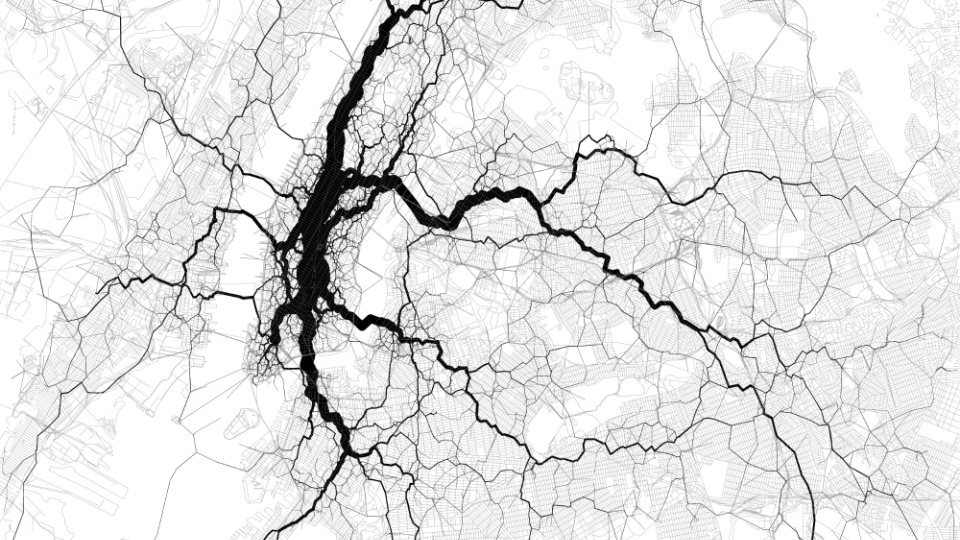