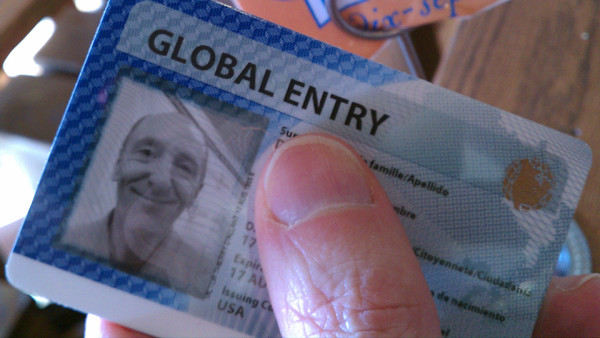 The last thing I like to do after a 17-hour trip is to stand in line at customs for over an hour. (I’d rather be taking a shower.) But you gotta do it, unless you’re a Global Entry member.

We’ve covered Global Entry before in the past–about how it rocks your socks off if you can gain membership–but never thought to apply myself. So, finally, after many, many hours of wasted time standing in line, I decided to see if I could finally join the one percent. It’s not that hard, imagine that!

You might want to check out the requirements before you start getting ready to give away your hard-earned $100 to the government, though. If you’ve ever violated any customs law–or have a conviction–there’s a good chance that you could be rejected. About 3 to 5% people who apply get the axe, so it might be worth evaluating your history to see if you have a high chance of getting accepted.

The application process is pretty straightforward, and if anything, the most time consuming process is at the beginning, when you’re filling out the form. If you’re planning to apply, I would set aside a good chunk of your time to sit in front of the computer, depending on how often you’ve moved in the past five years.

Not surprisingly, the application itself is pretty thorough. This is, after all, the government we’re talking about here. The Global Online Enrollment System (GOES), which serves the trusted traveler program, will pretty much want to know every place you’ve ever worked at and every address you’ve ever lived at in the past five years. Oh, and where you’ve gone. So, if you’re nomadic like I am, plan to allot some time. It took me a good hour or two to fill in, but for the average person, I’d daresay it’d take an hour.

You’ll also have to figure out what documents to bring to prove your identity when you go to your interview – a passport always works well. Once you pay the nonrefundable $100, your application is off to the guys who run everything.

(Loophole: You can also apply for NEXUS instead, which is the program for those who travel a lot in between the U.S. and Canada. Nexus members actually get to use Global Entry for free, but the fee is only $50 instead of $100. The caveat? You have to do the interview at an airport near the U.S.-Canadian border.)

Once that’s submitted, the system will either reject or conditionally approve you. It generally seems to take about a week for this stage: in my case, it took six days. From there on, if you’ve been given the green light, you’ll have about 30 days to schedule an interview before the application gets canceled. Fortunately, you can actually change this date online later.

The upside is that you can schedule the interview at any approved airport, even one that you are just passing through. If you plan to do this, it’s worth figuring out if the interview locations are before or after the security checkpoints–you’ve still got a flight! It’s just a given, though, that some airports like LAX will be more booked up than others so it’s worth it to check out several centers if you’re traveling soon.

So, remember those documents you promised to bring? Don’t forget them: a copy of the conditional approval letter, your identification and anything else if you have extenuating circumstances. This covers things like dismissal papers if you have a criminal record. Never hurts to be overly prepared.

The interview itself seems to take about 20-30 minutes on average–though it can easily take more time–so keep this is mind if you actually have to be at the airport to go somewhere. (My interview took 30 minutes.) They’ll usually ask you a few questions, ask for you to give your fingerprints so they can track you forever, maybe or maybe not show you a video, explain using the actual kiosk, and that’s it, gosh darn it blimey. You can be on your merry way now.

Once you're approved, you can pretty much start using Global Entry right away. The card, which is only required for land crossings, will get mailed to your home address.

I mean, at this point in my traveling career, I’ve already been through customs procedures that would make a “masseuse” pause, been detained in three countries, and once did long-distance travel by chicken bus, so this is nothing.