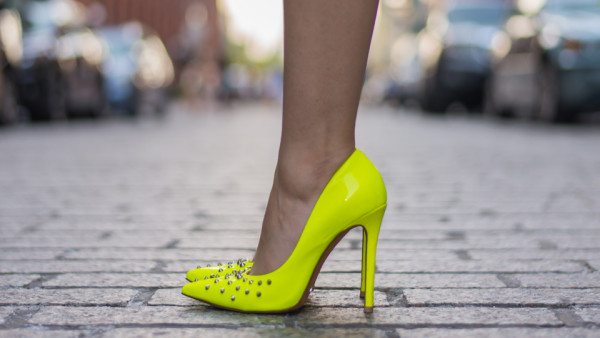 The first time I wore heels through the airport I was super proud that oh my gosh! I am a real grownup! going on a business trip! until I realized the heels I was wearing weren't going to make it through the metal detector. People usually skip them for comfort reasons but even if that's sacrificed, there's a good reason to wear something other than heels walking through airport security. (And not just because they might be weapons!)

I protested to TSA security some, mostly because barefoot is super ick, but there was zero choice in the matter. According to TSA, high heels typically and regularly set off airport metal detectors because most heels are constructed with a metal rod in the heel of the shoe to support it.

This particular FOX News article explores the science and construction of high heels and surprise, surprise, the dude reporter found that most heels are made out of:

Two parts sacrifice and a dash of solid steel, said Fred Allard, creative director for Nine West, one of the world's largest manufacturers of women's shoes.

Point being, keep the heels in the bag while transiting. Even Kimye doesn't get a pass.

Better off using them to get to Oz than to get through the airport!