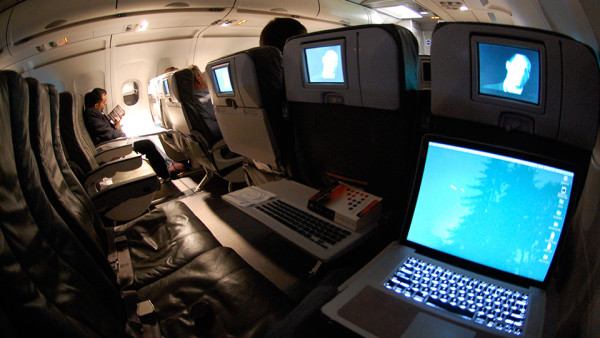 Business travelers just don’t travel the way normal people do. They live in a slightly different world: flat-bed seats, priority boarding and porcelain trays flacked by pressed suits. But the industry, as we currently know it, probably won’t look the same in a decade, as airlines slowly become more connected.

Domestic Internet options are available these days in the U.S., but no one’s really carried Wi-Fi while they’ canvassing over the Arctic. But even that is slowly changing. Just last month, Australian carrier Qantas began testing their new Wi-Fi connections between L.A. and their flights Down Under for first and business class passengers. (It’s still far from the first time an airline has undertook the task of transcontinental Internet; Lufthansa tried a few years ago but it hasn't been a great go. UPDATE: KLM and Air France just announced that they will begin trialing long-haul with Wi-Fi next year.)

Work on the go? It sounds appealing, until you consider the nature of business travel itself. Business travel, by large and far, is a luxury product, often bringing in several times the revenue a coach ticket does. An international roundtrip business ticket easily costs thousands, and even as much as ten thousand dollars. But how does adding Internet affect that premium service and the people that buy into it?

Let me digress briefly, to illustrate a point. A couple of years ago, I worked at a fairly well-known blog. We pumped out a lot of content around the clock, every 20 minutes on the dot, like any good news organization. This basically led to a lot of that type of working that doesn’t contribute to what we call a “work-life balance.” On top of checking my phone about every 4.25 minutes, I picked up a nasty habit of carrying my laptop nearly everywhere I went: the library, a café down the street, a 5-year-old’s birthday party.

I was ever-connected to a dongle; maximum and continuous productivity was the goal when I wasn’t sleeping. I even became agitated when I switched to a smartphone that was only capable of checking email every 2 minutes at the fastest; I wanted my news instantly. There’s also a distinct memory that’s somehow seared its way into my brain: dongle at hand, I was tethered to a laptop and relaying messages back, while a fellow co-worker maneuvered through San Francisco traffic like a game of ping pong. This we both took in stride. This, was normal.

It wasn’t any surprise that when my former boss flew to New York for a business meeting, he chose Virgin America. They were one of the few carriers, if not the only domestic carrier, at the time to carry in-flight Wi-Fi from San Francisco to New York. What other way to blast through five hours of mind-numbingly stale nuts than managing your team and making sure they’re on track? He reported back while speeds weren’t blazing fast, they were acceptable. All from 38,000 feet up in the air.

The reason why business travel exists at all is because companies, unlike you and me, have different needs. Often aided by large pockets, they live by a different set of rules: they might need to stay in Los Angeles an extra day or two to close a deal. Worst case scenario? An off-site meeting can be canceled entirely. It’s for this reason that businesses are often more willing to pay more to have a flexible ticket, rather than for one that’s packed with restrictions. (The actual, economical cost-benefit analysis of this argument is disputable though, but that’s not the point of this piece.)

With the demands that heavy traveling can take, It’s pretty easy to pity anyone who has to live it constantly. But clearly, some business travelers revel in their lifestyle and what it affords them: Bloomberg Businesswork’s Pico Iyer sang about the road warrior’s simple joys in a piece last month. Besides the extra amenities and perks, he claims that business travelers are easier able to cultivate real relationships with the cities they frequent, making a deeper connection than a one-off vacationer.

In the popular imagination, the inveterate business traveler has long been a figure of ridicule, of satire, even of tragedy. Think of Willy Loman in Death of a Salesman, crashing his cars on the road, or George Clooney, standing alone outside a family home in Up in the Air… They look at the photo in Hemispheres magazine of the road warrior who has just been rewarded for flying 10 million miles on United Airlines and wonder how you can remain human if you’re flying three times more than a professional pilot.

Thanks to my own personal roaming habits (which can feel a bit ridiculous compared to the average human being), I’ve had the opportunity to sit next to other people who spend so much time flying, they’re used to being accustomed with every perk available in the known airspace. Clearly, some of these people fly more than I do, all on the behest of someone else’s dime.

Seven times out of 10, a business traveler has sheepishly admitted to me they love flying around for their company. While they may love travel in and out of itself, it’s also clear that it allows them to catch up on the latest book they’re reading. Or they can catch up all of Modern Family they’ve just loaded up on their iPad. Their chance to briefly detox from the connected world is precious. Down time, in a sense, is the ultimate luxury business travelers have.

What happens after in-flight Wi-Fi becomes a mainstay? The technology is still funky, but it’s inevitable the technology will spread: and as people traverse the globe, they can bring their Google Docs and Facebook with them. Businessmen can forget about blaring up that video – it’ll be about checking in with their superiors. Productivity gets a slight boost, but at the cost of the finer side of business travel being lost among everyday office minutiae.

But maybe it’s naïve to be completely disconnected these days. There’s nothing worse than enduring a six-hour flight with the desire to work and the inability to do so, especially if it’s reliant on the Internet. Perhaps, one traveler in search of transcontinental Wi-Fi said it best when he complained that, in the end, “…being out of pocket for 15+ hours is just not realistic anymore.” 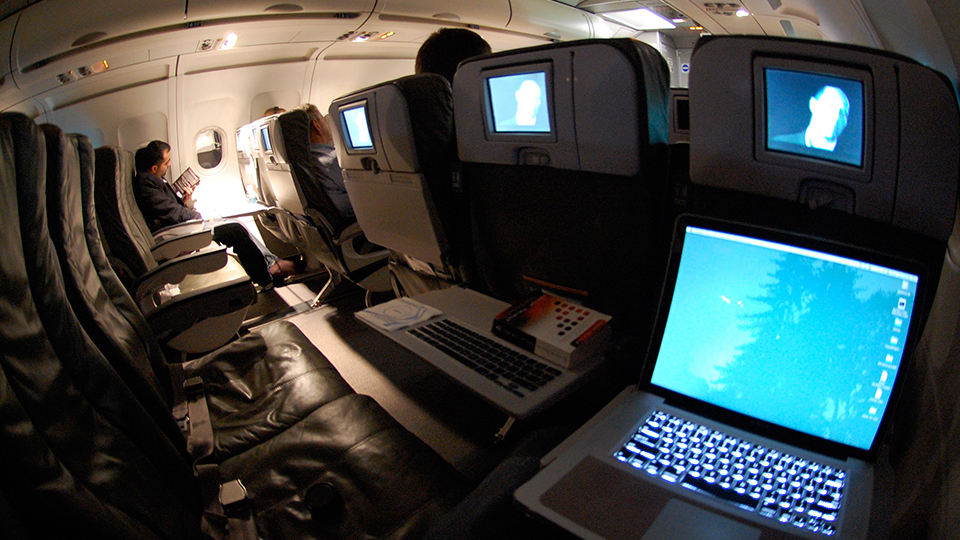