If you’ve spent all your Philippine pesos before you leave the airport, you’ll be in for a rude surprise on the way out: It’s called the airport departure tax. But understand it and you might even be able to get it refunded.

Most importantly, what is it? A departure tax “is a fee charged to visitors of a country for leaving the country.” It’s charged for different reasons, but can include charges for maintaining the airport.

In most instances, the airport departure tax is collected by the airline in your flight ticket. Thankfully, this is now the model that most countries seem to be moving toward. If it’s not included, however, you’ll have to pay a fee when you leave the country to either immigration or the airline. 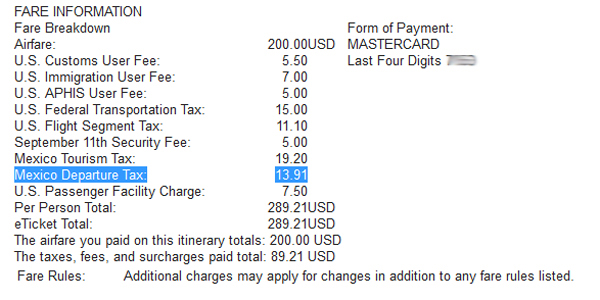 Fare breakdown that includes an airport departure tax for Mexico.

In certain situations, the tax is only assessed (or not included) in atypical scenarios. Bangladesh charges 300৳ if you exit the country by land. There’s also domestic departure tickets for specific countries: Cambodia assesses $12 USD for domestic departures, but international departure taxes are included in the flight ticket.

The tariff can be refunded depending on your circumstances, especially if you are transiting through airports. Usually, the tax isn’t applied unless you stay a certain amount of time in the airport/country (usually within the vicinity of 12-24 hours). For example, if passengers arrive and depart Hong Kong the same day, they are eligible for a $120 HKD ($15.45 USD) refund.

If you’re paying up, just don’t expect everyone to take credit card.