If you’re looking to save a few dollars, Uber ain’t it. You’d be taking the bus. But if you enjoy interacting with a taxi driver as little as humanly possible, you’ve come to the right place.

Chances are, you don’t live under a rock, but I’ll go ahead and cover the basics again. Uber is basically a private, black-car (oooh, fancy!) taxi service that you can call at the push of a button (or more like, a tap of the smartphone). Using the iPhone or Android app, you can call an Uber car to come and get you at your current location. Once it’s matched you up, you receive a picture of your driver, his name, his telephone number and the car model. Likewise, he also gets the information—but maybe not your picture—to get ahold of you if he needs to.

Probably one of the most appealing features about the whole process is Uber’s very 21st century way of being able to track your driver via GPS. Once he arrives, you’ll get a text in addition to seeing the cartoon car on your phone magically squiggle to your location. Because your credit card is stored online with your account (a predefined tip percentage can also be designated), your credit card automatically gets charged at the end of the trip. 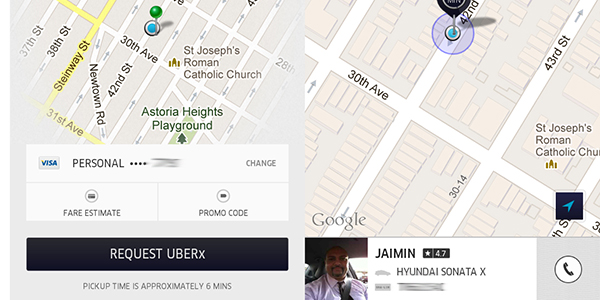 Welcome to the future.

Unfortunately, here’s the thing: once you call a car, you’ll get hit with a cancellation fee (anywhere from $5, $10 or infinity depending on city) if you decide to abort the process. The company charges you either per minute or per mile, depending on your car’s speed, with an initial base fare. The bigger the car, the more you get charged. Unlike a traditional metered cab, you can’t see how much it’s costing you, though the app offers a way to get an estimate on a fare.

A receipt gets automatically emailed to you, containing all the pertinent information, including the length of the trip, the distance traveled, and your average speed, all along with a map of your route. Okay, so I don’t know why Sukhvinder looped around to get around on the freeway, but I wasn’t happy to begin that I got charged a higher fare to begin with (our thoughts on surge pricing below). Typically, a short 20-minuteish trip in NYC using UberX often averaged about $25 per ride. 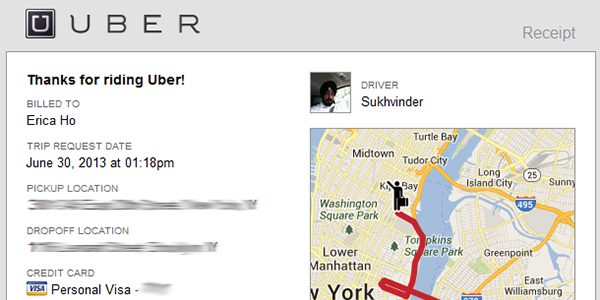 Basically, it’s an expensive way to get around town – even, perhaps more expensive than most traditional yellow cabs. The bottom line with Uber is that you’re trading in cost for the sake of technological convenience and efficiency.

Uber, sometimes, can be worth it. In places where it would have taken me ages to hail a cab – from the outer boroughs of New York City to the jigsaw that is Los Angeles – more times than not, I was able to get into a car within ten minutes. However, if you’re really far out in the boonies like Flushing in Queens, it can be difficult to nab a car though. For group situations, though, Uber seemed to really shine.

Drivers tended to be nice and courteous, and more often than not, seemed happy to be doing their job. We used UberX—only available in NYC and San Francisco—quite a few times, used the standard black car once, and used two SUVs on a few different occasions. We found out that the drivers actually own the car they’re driving, so be polite and respectful.

One downside? You can only call a car when you need it, but not in advance. We’re also not fans of the company’s surge pricing, which happens during peak demand, because it gives the company leeway to jack up the price from anywhere from 25 to 200 percent. I also had trouble receiving Uber texts on my Google Voice number, which while annoying, wasn’t a complete dealbreaker. (I ended up having to register my actual cell number.)

New customers frequently get the best deals, especially if you use a combo of referral bonuses and new customer-only campaigns. If you can find an existing member’s referral code *cough*, you’ll get your first ride free up to $30 (Just so you know, I’ll get the same, but it’s in our mutual interests, ja?). In addition, you can stack promotions, like this $5 Groupon for $25 credit. All in all, it adds up to $40 off your first ride. How’s that for incentive?

Internationally, it’s available in Amsterdam, Berlin, London, Lyon, Mexico City Munich, Paris, Rome, Seoul, Singapore, Stockholm, Sydney, Taipei, Toronto, and Zurich. But I don’t get why you wouldn’t take the Tube or whatever type of public transport is available.

Update: We finally stacked UberX up against competitor Lyft and these are the results.