When you know you’ve traveled too much? When you’ve got a stash of SIM cards from about ten different countries, all waiting to be organized.

Of course, much of this can easily be solved by signing up for T-Mobile’s free international roaming plan, but I realize that’s not always possible. In some cases, the traditional, old-fashioned method of buying a local SIM card to stay connected is sometimes still the best way to go. Oh my god, and it also gives you an actual local number to use. Imagine.

At the end of a trip, I prefer saving my SIM cards instead of tossing them out. The reason is twofold: first, you’ll never know when you return, and, second, they cost money to replace. There’s no underestimating just how convenient it is to have one on hand when you arrive somewhere. The hardest thing is literally popping in the card, throwing some credit on it and automatically getting signal. They’re also great little souvenirs.

I used to be able to just throw a SIM card into a plastic SD case, and that was about as complex my storage system used to be. A couple of years down the line, it’s starting to get a little bit unwieldy. I’ve branched out to two plastic SD cases to hold all my SIMs – not to mention, it’s starting to get a little crowded with, like, eight of them in there. 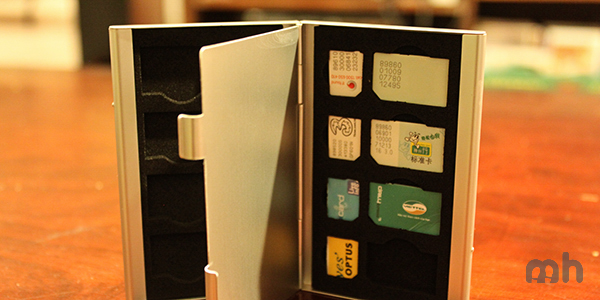 The lucky lady on eBay.

Clearly, this is a first-world problem. A little frustrated, I splurged on a brandless, aluminum SIM case holder from eBay for $3.90 per piece. Just slightly bigger than a credit card, it holds space for 6 micro SIMs, 8 normal SIMs, and a SIM card needle ejector. Each space is nicely padded for an extra layer of protection, if that’s the type of thing that worries you.

There’s not much else to say besides that it’s fairly compact and just slightly larger than a typical credit card at 2.12 in x .36 in x 3.34 in (5.4 cm x .9 cm x 8.4 cm). An aluminum divider separates the two sides; and perhaps its only downfall is that the needle isn’t included. Other than that, my biggest problem with it is that I’ve got to figure out which SIM cards have expired now.

The Mishu Things SIM card holder is another alternative for those who don’t need quite as many slots. It’s also more compact due to its nonexistent width. Depending on which version you get, the credit-card sized holder handles about 5 micro SIM or 4 normal SIM slots. It also included space for a SIM card ejector and the open pouch can carry anything from credit cards to public transport passes. At $5 for one piece, though, it’s expensive for what’s essentially some plastic.

Honestly, it’s not like you need to shell out money to store a couple of chips. Not only do plastic SD cases work well, but so do apparently anything from empty cigarette cases and Listerine mint strip cases to an Altoids tin can and a small pouch. (The Altoids suggestion is great; FlyerTalk poster Platcomike pointed out it’s also great for holding the original cards that hold the SIM, which sometimes have much needed info.)

The options are pretty much limitless, really, and it’s a good test to see exactly how creative you can get. Now if you’ll excuse me, I’m off to make an Altoids emergency survival kit.