There’s a lot of collapsible water bottles on the market, but only one can be king. That’s why we decided to go ahead take a look at two fairly standard bottles to see how they held next to each other.

I eventually settled on a 1.0-liter Vapur Eclipse that the company sent me to review and a 480-mL Chinese “Vapur”-labeled knockoff to see how they compared. Depending on how color-conscious you are, the Vapur Eclipse starts at $11.47 on Amazon for a 0.7-liter bottle while the similarly-sized Vapur Element starts at $8.91. (The only difference between the Element and the Eclipse model is the fact that the Eclipse version is slightly more upscale with a matte finish. Other than the Eclipse being plastickier, they’re virtually the same bottle.) The Chinese bottle, which is exactly identical to the Vapur Reflex save for two very minute details, cost me $1.94 on eBay.

[UPDATED June 13, 2014: I hate to say that after six months of using the Vapur Eclipse, I found an open seam in a side of the bottle I received that began leaking. I found this out the day before a big trip to the Andes; I was not a happy camper to say the least. The product warranty is only valid for one year. I’m still annoyed and will be looking into other alternatives.]

Both bottles seem noticeably taller and wider than a traditional plastic water bottle, though it’s hard to compare because both are more akin to a pouch than a bottle. The Chinese bottle is slightly wider than the Vapur, but without having the smaller-sized Vapur in hand, I’m guessing it could probably have something to do with the fact that the Vapur stores a larger quantity of water than its counterpart. While it’s a bit hard to get a read on each container’s exact weight sans H20, both bottles are extraordinary light. In a nutshell, these bottles would make excellent hiking and camping bottles.

One fundamental difference between the two models that ended up making a huge difference was the placement of the carabiner. This affected how well the carabiner was able to keep each bottle in a compact position when it wasn’t being used. In the real Vapur, the carabiner is attached on the neck of the cap so that it can fully hold the rest of the water bottle’s body in place when rolled up. The Chinese version, however, makes a key mistake by placing the carabiner in through a hole in the plastic body just below the cap. This actually makes it difficult to keep the rolled-up bottle in place because the carabiner is not fully able to encompass the entire body. 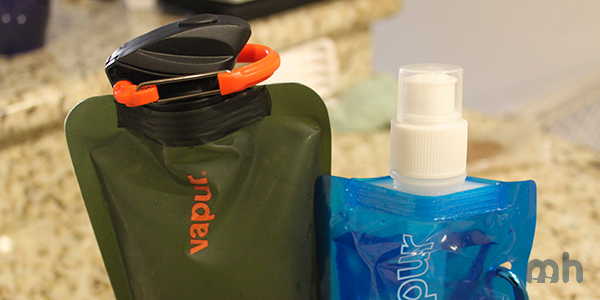 Vapur Eclipse to the left, Chinese knockoff to the right.

The integrated cap is also another aspect that sets the Vapur apart from the Chinese bottle, which uses a normal plastic screw-top. While it’s somewhat more frustrating getting liquid into the actual bottle—because of the longer wait time—it’s a fairly minor issue if you’re getting it from the tap. However, if you’re camping and need to funnel in filtered or boiled water, this might pose more of an issue. In this respect, the one advantage the Chinese Vapur’s screw-top had over the USA-made bottle was the ease of filling it due to the cap’s larger opening. On the downside, though, the Chinese bottle comes with a plastic lid for keeping the mouthpiece clean. Great for sanitation, but it quickly becomes a moving part easy to lose.

I also tested a range of water temperatures to see how each type fared in both bottles. Obviously, room temperature water didn’t pose any type of issue. Neither did cold water. There were more than a couple of times we threw both water bottles in the freezer. Though the water in each bottle took several hours to thaw, the containers held up fine. The real issue, I knew, would be hot water.

In particular, I was curious if hot water would have an effect on the durability of each plastic bottle. So at one point, I heated up a pot of water to 92°C (197.6°F), just below the point where water begins to boil. I then proceeded to fill each water bottle very slowly, and while neither plastic bottle proceeded to immediately go Wicked Witch of the East on me, it should be noted that this is not something you should do. It raises the outside temperature of the bottle significantly, making it very difficult to hold. I would not suggest it without some insulation; and it would probably be a lot wiser to wait until the water cools down before you pore it in. I didn’t let the hot water sit inside each bottle for a long time by any means, since it was becoming clear I was pushing each bottle to its physical limits.

Leakage-wise, there was no clear winner either. I filled each bottle to the brim and then stood them upside-down in separate, dry bowls. I left them for several hours like that and there was no detectable water in each bowl. There might be some variation on how much you throw them around, but even some Amazon reviewers state that it’s not even guaranteed to make much of a difference. Not that you would want it to.

As far as cleaning each bottle goes, each purports to be dishwasher-friendly. (Well, the Chinese one mentions it’s at least safe for the top rack.) This wasn’t something we were able to test, because we haven’t been in an dishwasher-equipped apartment for a couple of months now, but let’s take the word of some Amazon reviewers at face value. This might actually be preferable over letting them air dry because it’s not as easy to clean each bottle at it seems. No matter how long I let them sit out for, it seems nearly impossible to get every bit of moisture sucked out of the bottles.

I always encourage readers to use what is the most practical, and though some fake counterparts are often great at replicating the utility of the original item almost without discrimination, this is a clear case where I prefer the Vapur Eclipse for its plastics, integrated cap and thoughtfully placed carabiner. I’m generally pretty sensitive to price, but unless money is a huge concern, it is $10 well-spent. The Eclipse or Element, whichever model you decide to go with, is a great item to throw in your bag.