Heading to Barcelona, London and every city in between? Then it’s probably not in your best interest to buy a roundtrip ticket. In fact, you’re probably better off looking for an open-jaw ticket which are surprisingly easy to find — if you know where to look. All it takes is one small change in the right search engine.

If you don’t know what open-jaw tickets are, they’re simply roundtrip tickets where you depart from a different airport from the one you first initially landed at. If that doesn’t make sense, take a look at this description by Independent Traveler:

There are many reasons for booking an open-jaw ticket. If you plan on touring a specific region or doing a multi-destination trip, you can often save a lot of time and money with booking one. Even if an open-jaw ticket is more expensive than a typical roundtrip flight, it still may be worth it to go with the open-jaw — many times, I’ve ended up spending the price difference and more just backtracking to my original arrival point.

Of course, you’ve still got to figure out how to get from Point B to Point C, but you had to figure out that portion of the trip anyway, right? It’s a lot easier dealing with buying a one-way plane ticket instead of a more cumbersome roundtrip ticket between the two places.

Don’t be scared about how complicated it sounds, Booking open-jaws—and especially cheap open-jaws at that—isn’t really that difficult. I was walking a friend through booking an open-jaw itinerary this week when she complained about cheap plane flights from Hong Kong to both London and Rome in passing. She was mainly looking at London and Rome roundtrips from Hong Kong, since she wanted to visit both cities, when I suggested she try an open-jaw variation.

The main ingredient in booking an open-jaw is ditching any reliance on Kayak you may have. While it’s great about most of the time for generic flight searches, it doesn’t have the full functionality that Google ITA matrix has  — the actual search engine that Kayak is built on. Though it’s pretty much accessible to anyone, it won’t necessarily help you book specific itineraries. That’s an easily fixable problem, but we’ll get to that a little bit later in this guide.

Incidentally, the search tool that we want to use is not for multi-destination trips, but for roundtrips. There’s only one field you really have to worry about, but bear with me for the next couple of steps anyway. Using my friend’s proposed itinerary as an example, I decide to drop in HKG as the departure airport into the field. This is straightforward.

The only part that differs about searching for an open-jaw from a roundtrip is that multiple cities can but put in for the destination. You can do that? Yes you can. Stick to the big airports to make things simple for yourself. For the destination, I enter FCO, LHR, exactly like that. (It’s often better to pick specific airports instead of putting in a generic city code. For instance I would use LHR, Heathrow airport, instead of LON, all the airports in London.) 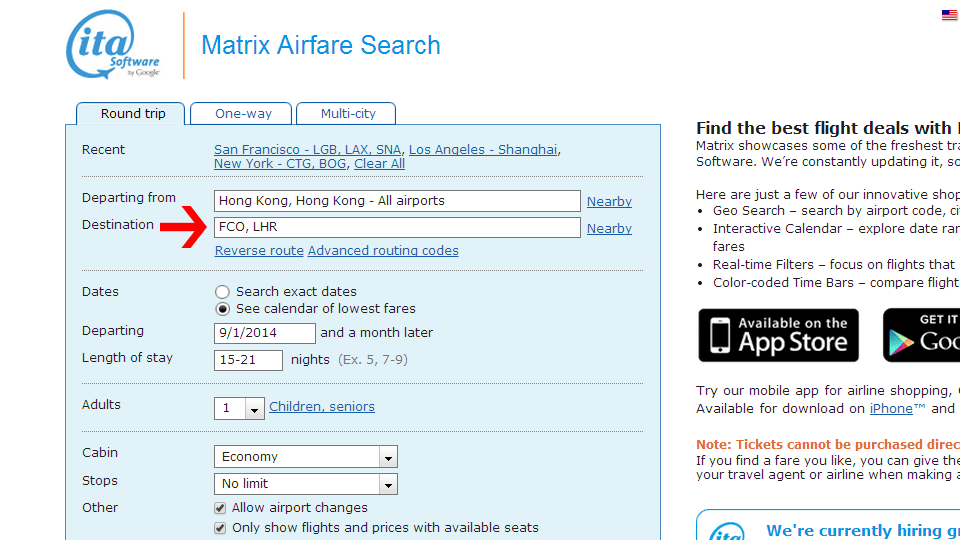 The biggest difference is the “destination” field.

The comma denotes you are interested in routes that go to London, Rome or both cities. Though you can’t specify which city you’d like to fly into first, don’t worry, a full set of options will come back.

The dates will depend on your schedule. You can search for dates the more traditional way, but because my friend is pretty flexible, I am going to choose the option “See calendar of lowest fares.” I quickly make it clear that I’d be open to any departure within a month starting from September 1st. I also specify that I am interested in any trip that is 15-21 nights long, because she wants to go for about three weeks.

It’s at this point where my love for Google ITA kicks in. The search engine will return fares for departures for every day for the entire month of September. If you hover over a specific date, you can also see how different trip durations affect the price of the ticket. To make things simple, I just quickly pick September 2nd for 20 nights. Immediately, I can see that the lowest price across all these dates is $880. 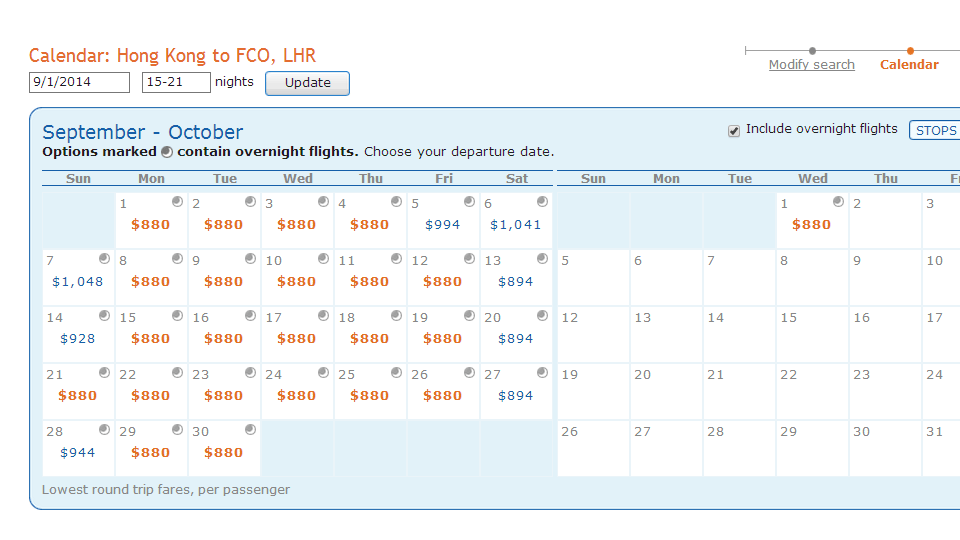 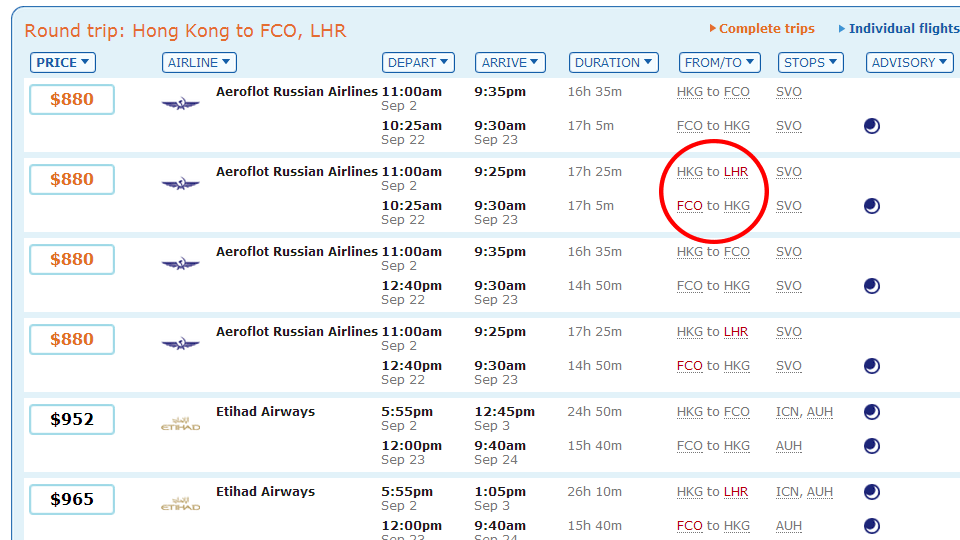 The first suggested itinerary with Aeroflot seems sufficient, so we’re just gonna go with that. Like we mentioned earlier, the main downside of using Google ITA is that while it shows current airfare pricing, it doesn’t tell where you can book that particular ticket. This is usually where I see if I can replicate it in Kayak or, better yet, the airline’s website using multi-destination search. (It’s a good idea to make sure the flight numbers match up.) If for some reason, you can’t seem to pull up the same itinerary at a similar price—note we didn’t say exact price—there’s a Hipmunk workaround.

The Hipmunk trick, which you can read about here, essentially forcefeeds the itinerary into a bookable version using ITA routing language. I can’t always replicate the same exact price, I can usually get it down to a pretty similar price, usually with a $30-40 price difference at the most. Most of the time, though, it’s much less than that and often within $10 of the fare I was quoted on Google ITA. Usually, I decide a $10 difference is not worth the hernia.

And that, my friends, is exactly how you book a cheap open-jaw ticket.