Heading to Colorado and renting out a house with a group of your friends is awesome. But figuring out who owes who what at the end is like entering the seventh circle of hell.

There are many upsides to group travel but figuring out finances has to be one of the most unpleasant parts of the experience. Though there are a couple methods for remedying that, there are a lot of downsides to each process. Eventually, I found that, for the least headache, resorting to expense calculators like Splitwise may not be the most terrible way to go. In fact, it’s great.

Though I like my trusted methods, the old-fashioned ways of settling group expenses left me frustrated. Settling the bill after each incident gets time-consuming. Keeping track of who paid what—if Amy owes Mellissa $6 but Mellissa owes Amy $11 and Erica owes Mellissa and Amy $2 each—is aggravating. Meanwhile, taking turns paying for things can also make things unfair. Throw in an Asian that’s not great at math and group expenses become a pain in the ass.

The important thing is making sure anyone who takes part of the financial responsibility should be noting things down or grabbing receipts. Receipts are still part of the devil’s domain but Splitwise simplifies it by letting users snap pictures of receipts directly through their mobile app on-the-fly. But first, I’m getting ahead of myself. A few weeks ago, I went to Maine with a few girlfriends. And somewhere along the line, this included a decision to settle the bill afterwards because we were so busy lobstering and drinking vino in the meantime. 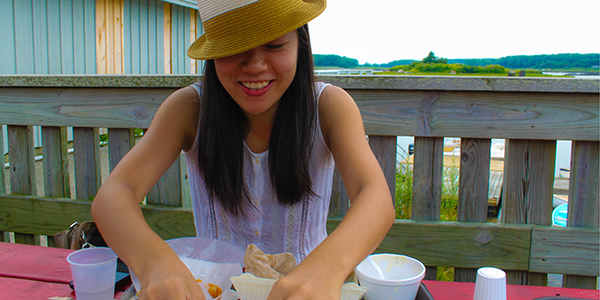 Excel, the tabula rasa of data

At the end of the trip, I did what most people would normally do: I opened up Excel to divvy up the expenses. It’s just one of those pieces of software that’s so arbitrary and so customizable that it becomes a tabula rasa for any type of data you want to throw into it. This can be a good and bad thing, but I decided to give the industry standard a whirl before I made up my mind about anything.

I began setting up my sheet and quickly established a second formula to double check the split numbers against the original numbers. Once I found a calculator, I began splitting the costs equally or unequally depending on the transaction. It wasn’t long before I ran into a couple of logistical problems and realized that some assumptions would have to be made in order to make sure costs would remain as fair as possible.

In the end, it took some more time with a calculator than I anticipated, but I eventually arrived at fair numbers that had everyone accountable for a weekend road trip.

Giving Splitwise a run for its money 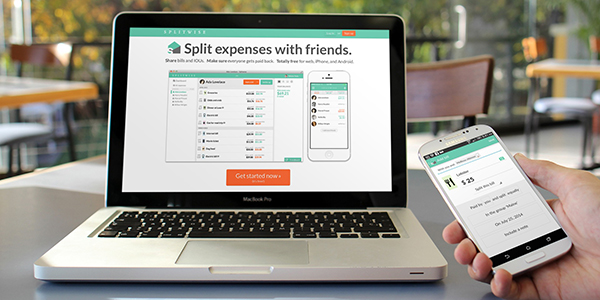 Frustrated by my Excel experience, I began wondering if there was something that could handle this process a lot more effortlessly. I headed over to Crowdtilt first before I figured it wasn’t complex enough to handle what I needed. I’m a picky beast when it comes to my numbers—I like lots of numbers and breakdowns—but I also do not want to get overwhelmed by them. At the same time, the software needs to be complicated enough to actually do the job. So I finally decided to take a chance with Splitwise to see how it fared handling our Maine trip expenses.

It’s pretty brainless setting up groups and adding people. Though it’s not required for others members of the group to create an account, it is still the best way for them to see detailed breakdowns. Splitwise, though, still offers the ability to export information in other formats and this is what I love about the software. It does an incredible job at simplifying a process that is normally pretty excruciating.

Currently, Splitwise supports 76 currencies worldwide. Though it wasn’t initially obvious, it’s actually possible to set a different currency for each transaction by clicking on the currency symbol and then selecting the intended one. Multiple currencies can be managed within the same group. The software won’t convert currencies to the current exchange rate but it’s still a great feature that allows the app to be used for domestic or international trips. 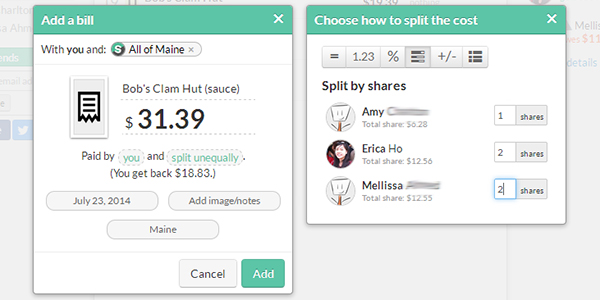 An expense split by the number of shares.

There are several ways to split an expense. It can be divided equally, by exact amounts, by percentages, shares/units (Amy gets one bottle of hot sauce while everyone else gets two), or adjustments. The final option includes the ability to separate expenses through an itemized list. Best of all, if the numbers don’t add up, it’s not possible to add the transaction, thus creating a self-checking mechanism.

The itemized list allows allows for each listed item to be split among everyone, a few people or just one person. This is also the option that works best for meals by accounting for sales tax and tip either as a percentage or an actual number. The only time I needed to use a calculator was to figure out the tip amount after tax. It also immediately solved my proportional tip problem by making sure everything was fairly distributed among the group. 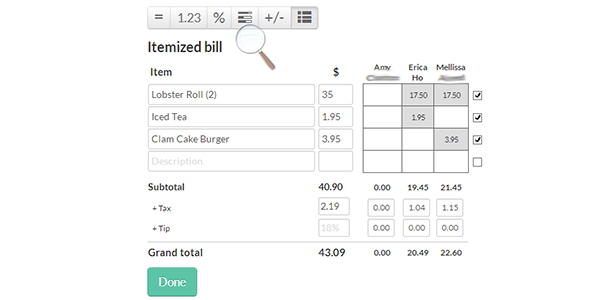 An expense spit by detailed itemization.

I only found one minor issue with the itemized list. In one incident, Mellissa and Amy ordered three beers. However, they did not equally share the beers equally and it was not possible to indicate shares/units in the itemized list. As a result, I needed to list out each charge separately for each person. The fix was relatively painless, but I wish I could have denoted units.

One of the features I really liked about the software was the ability to include a picture—hello receipt!—and the ability to categorize each expense. The only downside to it all is that the mobile app doesn’t do any actual OCR scanning of the receipt but the app will store it within each sale. Once you’re finished entering transactions, Splitwise will generate a pie chart and list showing how expenses were distributed across different categories. 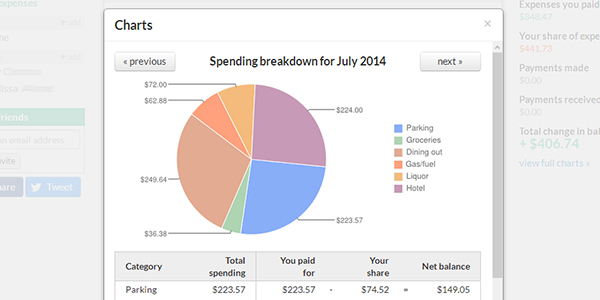 I’m a little freaked out about how they know to hit all my geeky number buttons.

There is also a paid version of Splitwise that offers more charts, graphs, expense searches and downloadable backups if that’s your thing. The company lets you pay as much or as little as you want for the upgraded version at a fixed price per month. While I didn’t jump on it, if it offered the ability to import Mint transactions, I would be like ALL OVER THAT. Jon Bittner, the CEO, told me the company is currently working on a way to include transactions from banks and merchants.

Splitwise does all the final calculations on who owes who what. It also offers to “simplify debts,” which is a feature that’s best explained like this:

It means that if Anna owes Bob, and Bob owes Cathy, then Anna can just pay back Cathy directly.

I decided to opt out of it for this post but I would love to go back and use this on my next group trip.

Group members that have created an account can often log in to see the exact breakdown. But even if they don’t choose to, the list of charges can be shown on a printable summary or exported to Excel. Splitwise also allows you to “settle” the bill using Venmo or PayPal authorizations; and, of course, old-fashioned cash payments can be recorded into the ledger. There’s always the gentle email reminder feature…

In terms of accuracy, Splitwise calculated within a dollar of my Excel calculations. But it’s good to note the Excel numbers suffered from one major faulty logical assumption and that the margin of error on that was, well, probably about a dollar in either direction. But maybe I’ll just take those extra cents as a lovely tip from these dear ladies for putting the entire trip together.

Overall, I was incredibly impressed at the balance Splitwise managed to achieve between ease and functionality. It’s been a long time since I’ve seen software that handles what it was intended to do so well. Excel, I ain’t looking back.