Douglas Adams said it best when he mentioned that a towel is the most massively useful tool any interstellar hitchhiker could have in his arsenal. Which makes me secretly wonder if he had a PackTowl stashed away in his bag.

I consider bringing a towel as essential as bringing a toothbrush, but a normal towel is one of the most cumbersome things you can ever probably include in your bag. But travel towels, which are a fraction of the size and weight of regular towels, save significantly on space. So I invested in a REI MultiTowel Lite a couple of years ago and, true to form, it became one of my favorite pieces of travel gear ever invented. But as time has passed, a nagging question pesters me: is it really the best travel towel out there? What else am I missing out on?

The interwebs told me that the PackTowl Ultralite could solve my existential crisis. While the company actually has a couple different versions out there—including the PackTowl Personal and PackTowl Original which are heavier and arguably more absorbent—the Ultralite seemed like the best mix of efficacy and size for traveling. So after we received our review unit, I was ready to hit the showers with both the REI and the PackTowl in tow.

Both towels are available online at Amazon and REI. The PackTowl Ultralite large is $24.95 while the extra-large size retails for $28.17. Comparatively, the cheaper REI MultiTowel Lite large is $17.50 while the extra-large retails for $21.50 on REI. As it turns out below, there’s a lot of variables for figuring out which towel to go with, but we think the best of the pack is the PackTowl. The REI, though, does a fine job at a cheaper price so it might be a better option for price-conscious travelers.

In this review, we evaluated both products in their large size. After owning the REI for years, I was surprised to see that the PackTowl was, well, so small and light, doubting that it would be as big as the manufacturer claimed it to be. These fears turned out to be unfounded, but the differences in carrying size and weight were noticeable. The REI weighs in at a hefty 7.2 ounces (204 grams) while the PackTowl weighs in at a feather-like 1.8 ounces (51 grams). That’s a difference of 5.4 ounces (153 grams). (It should be noted I am using an older version of the REI MultiTowel Lite. The newer version seems to be lighter and slightly smaller, though still not as light as the PackTowl.)

There’s also some visible differences between the carrying pouches. The REI pouch measures 8.5 inches (21.6 cm) long by 5 inches (12.7 cm) wide while the PackTowl pouch measures 7 inches (17.8 cm) long by 5 (12.7 cm) inches wide — the REI is just slightly longer. It also includes two hanging loops and a flimsy inside compartment for extra items like bath products to boot. The PackTowl, in comparison, only has one hanging loop and no compartment. The thing is, I didn’t find these differences to make much of a difference either way. In fact, I found it more annoying I had to fold both the REI towel and the PackTowl into thirds to fit inside the pouches.

In terms of feel, I prefer the material on the REI towel over the PackTowl. Being made out of 85% polyester and 15% nylon microfiber, the REI towel has a nice, well, soft microfiber-ish feel to it. It doesn’t feel strange or like I’m swabbing a microfiber cloth all over myself when I use it. It’s also why I was slightly disappointed to see the tactile experience of the PackTowl fail to measure up but this probably has a lot to do with the fact that it has a similar texture to a softer piece of felt. (It’s actually made out of 70% polyester and 30% nylon, which would explain the feel of the strange blend.) In any case, you should keep in mind that most travel towels are going to make bath towels at Bed Bath and Beyond seem luxurious in comparison. 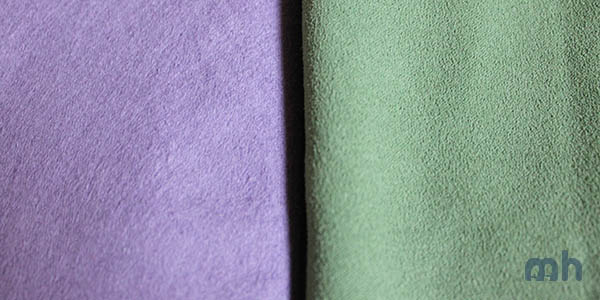 The PackTowl in plum and the REI in green.

For some strange reason, I noticed that REI has a penchant for strange towel sizes and this includes the REI MultiTowel Lite. The version that I have measures at 37 inches (94 cm) by 23.5 inches (59.7 cm); the PackTowl is just a tad smaller at 36 inches (91.4 cm) by 20 inches (50.8). Though the REI is larger, I didn’t prefer one over the either because they were both just a bit too small.

In almost all cases—unless you’re a small child or a tiny Asian girl even tinier than me—I would recommend going with the extra-large size for both brands. The standard towel size is 52 inches (132.1 cm) by 27 inches (68.6 cm); the PackTowl Ultralite XL has the same exact dimensions. The REI MultiTowel Lite XL, on the other hand, seems to be more rectangular at 54 inches (137.2 cm) by 25 inches (63.5 cm). In keeping with proportions as the large, the PackTowl still remains substantially lighter at 3.1 ounces (87.9 grams) while the REI weighs in at 6.4 ounces (181.4 grams).

One thing I did notice right away while I was soaking up the towels was that the REI seems to effortlessly hold more water and I think a lot of this is due to the fabric material. It was noticeably heavier wet and the company claims it can absorb water up to 8 times its weight, which is pretty impressive. The PackTowl, on the other hand, can only absorb water 4 times its weight. I suppose I should go ahead and crown the REI for this, but you’re basically trading efficient water absorption for faster drying and a feather-light footprint.

So at the height of New York summer—let’s all cheer for 63% humidity!—I soaked both towels thoroughly and hung them up to dry to see who would win the World Cup of drying. Then I proceeded to watch the World Cup while I waited. I didn’t wring the towels to avoid speeding up the drying process. Thank god the game went into penalties. About some eight hours and 10 minutes later, the PackTowl finally managed to dry sufficiently to the point where it could be used again. On the other hand, it took the REI MultiLite some extra two hours to reach the same level. In drier climates, this entire process would take much less time.

I never had any issue with throwing either towel into a typical washer or dryer. Though some travel towels can have an issue with color bleeding, this didn’t seem to be a problem for me. If you’re wanting to play it safe, I’d definitely make sure to get the PackTowl wet a few times before mixing it in with all your whites. But seriously, why would you do that?

In general, I prefer the weight and footprint of the PackTowl over the REI; however, the material and feel of the REI over the PackTowl is superior. I’ve also got an issue with the REI’s weird sizing — it’s not that big of a deal to conform to standard towel size. To mix things up, the REI is also somewhat cheaper than the PackTowl, but if the PackTowl stands up for as long as I’ve had my old towel, I wouldn’t mind spending the extra money because you’re not going to miss the extra dollars in a few years.

Obviously, there are a lot of factors to take in. But In terms of preference, this is how I’d rate the different brands and sizes below based on features and price.

Though there’s bit of price range between the cheapest REI and the most expensive PackTowl, I’d actually think the price differential on the PackTowl is justified due to its compact footprint and light weight. If cost is a factor, I would opt for the REI towel in the extra-large size. If it’s anything else that experience has taught me, it’s that you should prioritize packing a towel before anything else.