Just because it looks hopeless doesn’t mean you should give up hope for scoring a seat up front. Even if it looks like you’ve got a snowball’s chance in hell.

In fact, even in the bleakest of airplane rides, when the economy cabin looks close to filling up and the only three choices are middle seats near the back, that’s actually when you have the best chance of getting up front. All you have to do is resist the urge to pick a seat. That’s because most people don’t realize how the seating process actually works and how to use it to their advantage.

This trick should also work if there are only premium seats—the one you’ve got to pay for—left and there are no back of the bus seats left. Though I can’t guarantee results it’s not like the odds are in your favor at this point. This might be one of my favorite hacks, actually, because there’s no risk you’ll end up in a seat worse than you originally anticipated.

For this trick to work effectively as possible, there should be extremely limited availability in terms of free seating. The less seats there are and the crappier the seats are, the better. It’s a good thing planes fly close to full these days, eh?

Let me explain. By picking a seat, most people fail to realize several things: Passengers are not obligated to pay for a premium seat if there are no more free seats left on the plane. The airline still has to seat you. Second, seat maps are misleading because there are usually people on the flight that don’t have a seat assignment yet. Odds are good that seats will fill up quickly by the time the plane leaves the ground.

Third, the seats in the front of the cabin are usually reserved until the very last minute. Gate agents will dip into this bucket to seat passengers if there are no other options left on the plane. They can’t charge you for something you didn’t “want.” That’s where the magic of not picking a seat comes into play: as people check-in, they’ll just grab any remaining seat. With luck, the gate agent will run out of normal seats and push you up front.

After a lot of deliberation on my Christmas plans, I recently hitched a ride to Los Angeles and then wanted to fly up at the very last minute. But when you buy a one-way plane ticket two days before departure, you don’t have very much choice when it comes to seating. JetBlue made it very clear that aside from shelling out for an Even More Space seat, I could sit in 22B and 24B — all in the middle seat practically in the dead back of the plane. 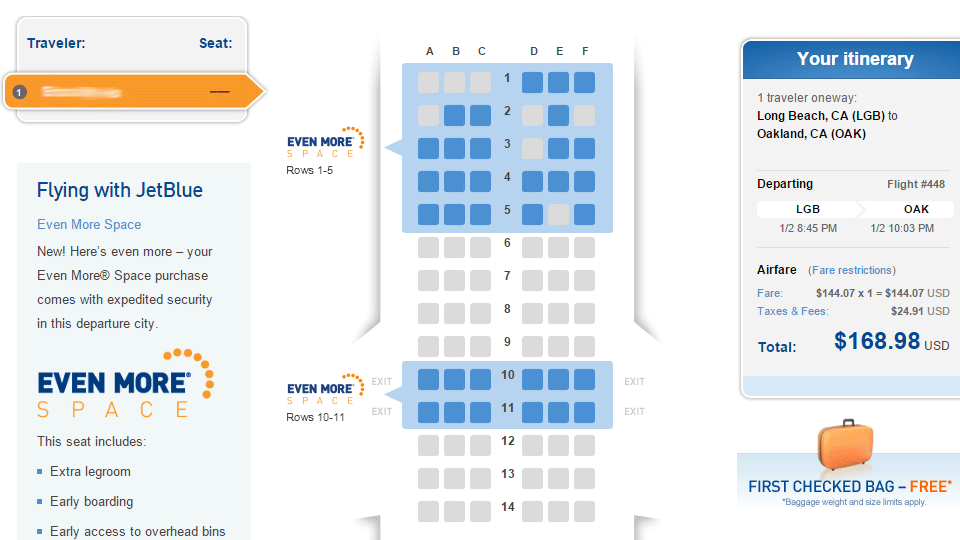 JetBlue seating. Click to see how far back I was.

I took a chance and skipped selecting a seat. If it didn’t pan out, I would just end up in 22B or 24B, right? I guessed the plane was close to flying completely full and that most people won’t generally pay more just for extra legroom. The odds were good that those that didn’t have seats would end up in those remaining spaces, through their own choosing or a forced seat assignment. Theoretically, this would force an airline rep to seat me further up in the plane.

Finally, it was time to check in. I scanned the seating arrangement to see if any better seats had popped up in the meantime. Aside from the two original choices I had, 18B was now a choice, a huge step up. On a hunch, I thought I could do better and passed on it. About an hour before I arrived at the airport, I checked again. “Seat selection unavailable; please see JetBlue representative at the airport,” it said. Exactly what I wanted.

Because I checked in online, I went straight to the gate without any seat assignment. I asked the gate agent for one, who told me to wait a bit. As I was checking my boarding pass on my phone, it refreshed to show 12E. Still a middle seat but eons better than any of the three options that I had been presented with before. Also much closer to the front of the plane. Sounded good to me!

Then a curious thing happened at boarding. My boarding pass errored out so the gate agent pulled me aside. I explained it might have had something to do with my seat, so the agent asked me if I’d be willing to have my seat reassigned again. Then she said the magic words, “Well, I have all this inventory that’s opened up now, so do you want an aisle or a window seat?” In that case, if you don’t mind…

The magic seat number: 7C. It was an aisle seat in the front! Even if it wasn’t necessarily an Even More Space seat, it was light years ahead of the choices I got when I originally bought the ticket. Gate agents don’t care about anything else than getting the plane out on time with the most amount of passengers possible, premium seats be damned. It’s about efficiency at the gate, not catering to a stupid à-la-carte system airlines have created for passengers.

And that’s how you do it, folks.

Note: This really doesn’t work if you’re traveling with others or if the plane that you’re flying on oversold the seats. It’s worth pointing out that JetBlue does not oversell its seats. (Sometimes it’s possible to make an educated guess—so you’re not going in blind—if a flight is oversold by looking at the premium cabins and seeing how full they are and then taking a look at the standby list, which are sometimes publicly available online at the airline website.)