Okay, not all the time, but it’s definitely more likely than dying by plane. In fact, it’s estimated that lightning strikes every airplane at least once per year. (The odds of being personally struck by lightning is about 1 in 3,000 in a person’s lifetime.)

One of the most shocked reactions I ever witnessed was an off-duty flight attendant telling people that it’s actually pretty common for lightning to strike planes mid-flight. The first time I heard about it happening was when the Spanish World Cup soccer team was returning disgraced after failing to advance past the group stage. As if that alone wasn’t bad enough, there were the heavens telling you that you failed.

But before anyone starts to freak out about lightning striking them clear out of the air with the force of God, having lightning hit a plane is really no biggie. While there have been reports historically of lightning causing serious damage to aircraft, it takes a lot more than an electrical bolt to bring down planes these days. The last time lightning was the cause of plane crash in the U.S. was way, way back in 1967.

It makes a lot of sense that airplanes would be prone to lightning strikes. They’re vessels made of metal (at least partially) hurtling through clouds, the very place where storms brew. In fact, airplanes actually can provoke or trigger lightning strikes.

Essentially, the plane acts as a conductor and connects two polar opposite regions, one positively charged and one negatively charged. The regions can be two opposing chunks of cumulus clouds, or it could be a cloud and the ground. So, the plane is what creates and completes the needed electrical circuit for lightning to flash into existence.

The bolt will usually make contact with a part of the plane that juts out, like the wingtip or the nose, which has a higher density of electrical fields than other parts of the aircraft because of their pointed shapes, according to the Smithsonian’s Air & Space magazine.

A senior engineer at Lightning Technologies, Inc. reports that the current would then travel through the “skin” of the plane, which is really just the outer shell of the plane. It might leave burn marks at the entry and exit points but other than that everything should be no worse for the wear. 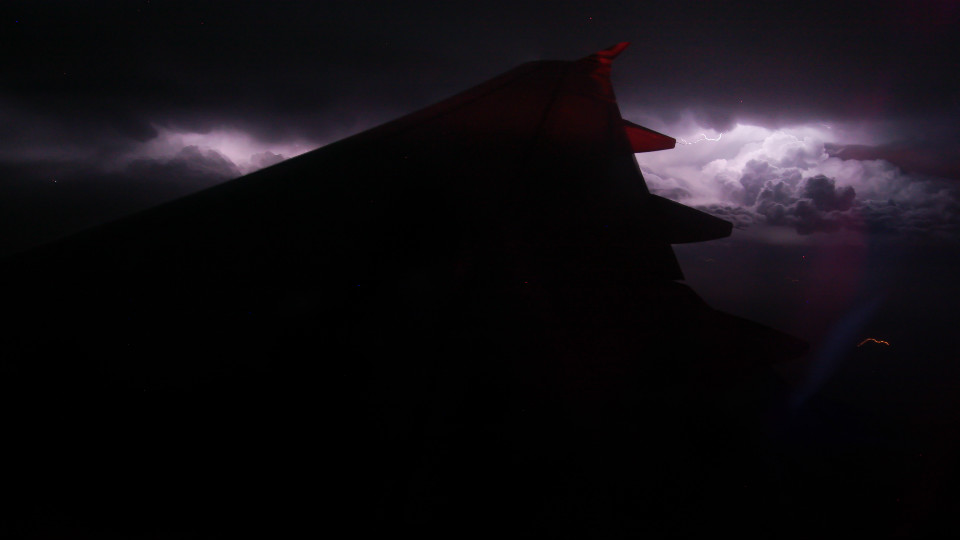 In the case that lightning strikes the plane mid-flight, the most likely scenario is that everyone will see a flash and hear a loud noise (duh). The lights might flicker and the crew might have to deal with some temporary technical interference but some passengers won’t even notice.

Even if a plane lands after lightning strikes, it’s usually a precautionary measure. Professor Manu Haddad of Cardiff University’s “lightning lab” says it doesn’t necessarily mean that there is any danger or anything is wrong.

Some Quora users shared their experience, including one guy whose plane endured two hits and unapologetically mentioned that, “It is one moment in my life when I honestly thought I was going to die.” But, mostly, everyone else didn’t think it was so scary, including one user who summed it up with a nice little analogy:

Read Quote of Julia Dorfman’s answer to What does it feel like when your plane gets hit by lightning? on Quora

Thankfully, the people in charge have realized aircraft are moving targets; lightning and potential strikes have been factored into plane construction for a long, long time. In fact, planes have “lightning protection engineers,” which even if that’s just one hat an engineer wears goes far to make most travelers feel safe.

These engineers take extreme caution to guarantee lightning can’t cause sparks in the plane’s fuel system (which is how the 1967 crash occurred). They also make sure all the plane’s electronic devices are “well-shielded,” according to Haddad. Further, the average lightning strike apparently discharges 30,000 amperes and planes are designed, built and tested to handle far more than that, says Haddad.