Map Happy » Trip Planning » Gear » Does the Bellroy Travel Wallet Live Up to the Hype?

If I was a man, the Bellroy Travel Wallet could be my spirit animal. The level of detail makes me certain they’ve seen into my soul as a frequent flier.

Truth be told, I’m not a fan of travel wallets. I find the thought of keeping everything together in one spot a bad, bad idea — mostly because I have lost everything in one fell swoop. But the Bellroy Travel Wallet, manufactured by an Australian company, is designed to be an accompaniment to the everyday wallet. And it comes at a hefty price, specifically $119.95 on Amazon, though the company did send us a sample to review.

The Bellroy Travel Wallet is a specialized wallet with a passport holder, SIM card pouch and micropen for customs along with space for tickets, credit cards, bills and forms all bound up in vegetable-tanned cow leather. It also comes in a variety of colors such as black, slate gray, dark brown and light brown. Unfortunately what it makes up in attention to features and details, it falls slightly short in materials and craftsmanship, especially at this price point.

What’s not immediately apparent from looking at it online is that the wallet measures 3.82 inches x 5.91 inches (9.7 cm x 15 cm), significantly bigger than the average man wallet. This is not a wallet easily thrown into the back jean pocket—though you obviously can—but is clearly designed to be a coat wallet due to its bulk and size.

Comparatively, the average men’s wallet averages around 3.54 inches x 4.33 inches (9 cm x 11 cm). In a nutshell, the height is similar but the width is about 26.7% larger. It is a thin wallet, and perhaps that’s something that can account for the leather used. 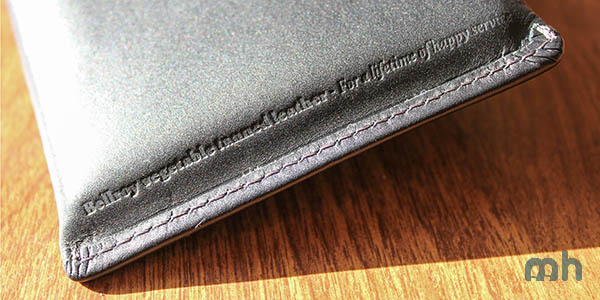 Basically, the leather is not THE BEST. Its decent but I’ve definitely seen better. I don’t know if this probably has something to do with an environmentally sustainable leather or its thinness but almost everyone I showed it to made the same unprompted comment. Now, I don’t know if there is some kind of weird price-justification consumer psychology going on over at Amazon but based on its price but I stand pretty firmly on this thought. In terms of craftsmanship, the stitching itself held up pretty well over 26,726 miles (43,011 km) sans one incident which I’ll go into depth later.

The most obvious section of the wallet has space for a passport and even a small notebook in lieu of it. I was able to slide in my 56-page passport, which ain’t your normal-sized passport, into the slot without forcing it. It should come as no surprise that most people have reported they can fit up to two normal-sized passports into it without any issue. It’s clearly built with frequent flyers and serious travelers in mind.

Though the company claims it can hold up to ten plus cards, there are four front slots for the most accessed cards and three slots along the top of the interior of the first billfold. (Sneaky!) In total, there only seems to be “space” for seven cards, though the leather stretches over time to accommodate more cards. People have also reported that this is indeed the case for those worried and need to jam in a lot of stuff.

On the negative side, once the leather stretches, it may not be possible to fit in a smaller amount of cards and keep them secure. In particular, I found the interior slots part to be the most interesting and defective, because it’s Bellroy built the last three slots along the side to be quite tight — cards don’t easily slide in or out. 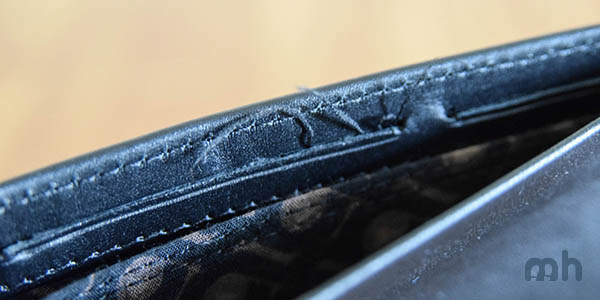 It’s also where our unit revealed the wallet’s first defect: a thin thread came loose among one of the slots the day after I received it. Before it had gone for a test run, even. (This thread later became worse over time, though, on the whole, the stitching held up.)

Quite obviously, Bellroy’s main selling point is the Japanese micropen, the Pilot BRF-8F, that can be inserted into the fold of the wallet crease, making it convenient to jot down a couple of notes down or fill out a customs form. Included is a free refill—whee!—but in case you lose the Pilot BRF-8F 0.7mm refill, it’s also available on Amazon. A couple of brief searches peg refills at $5 per, and it’s not surprising given the fact this isn’t a pen you find everyday on the street. Our tester Andy (and who practically went into exhaustion traveling and testing!) noticed he barely felt it even carrying it in his back jean pocket. 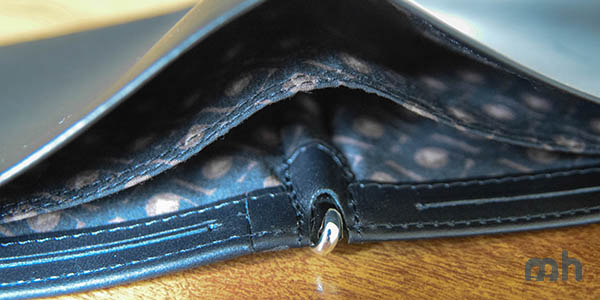 There inner SIM card spot, located on the inner left corner, is for extra SIM cards. It’s an unusual feature and even got a close girlfriend (who travels around 100,000 miles per year) oohing and ahhing. Obviously, it’s got about enough space for one SIM or so, not a ton. Even if you’re sporting T-Mobile’s free data roaming, I never like to take the chance that network and data coverage will be great everywhere. The pouch itself, though, is only technically a cutaway so when Andy slid one into the spot, he noticed it fell into the other part of the wallet and became difficult to remove.

Personally, I just wanted to see how everything fare inside the wallet, so I chunked a couple of cards I thought I might use inside:

The most noticeable thing is that it strikes me more as a secondary rather than an all-in-one wallet because of the size and the leather. Used as a jeans wallet, the leather starts getting fussed rather easily. It’s clear that the leather would quickly wear out over time worn in this particular manner as we bounced it from San Francisco to Houston to St. Louis to Houston to Perth to Bali to Houston to Boston. (Never mind wearing it this way would also destroy the passport as well.) 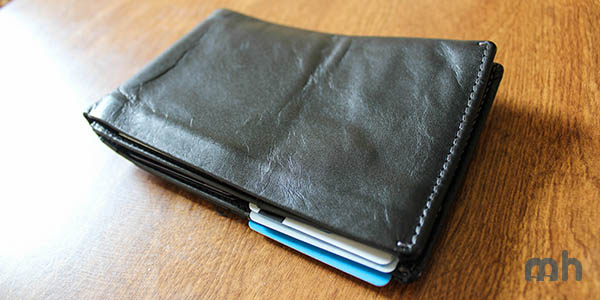 A week with the back jean pocket.

As much as I want to, it’s hard to sweep its flaws under the rug. Though the brushed leather is a nice touch—complete with beautiful leather smell, ohmaigod—it was more than apparent there were at least one stitching issue. The thing that made it even more terrible was that this didn’t happen after several months on the road but literally on the second day I received it. That’s definitely no bueno even if the company offers a three-year warranty.

But I still like it. If that makes sense.

This Review In Under 10 Seconds

The Bellroy Travel Wallet accounts for details most normal travel wallets don’t take into consideration. But as a second wallet and not a main wallet, it’s expensive. If Bellroy could come down about $30 lower on the price even, that’d be perfect. (Some of the features don’t justify that high of a premium.) There are minor craftsmanship and material issues but despite that, I’d recommend it. The consensus was that the wallet rates around a 6 or 7 out of 10.

It’s still a cool gift most travelers wouldn’t mind receiving — as long they don’t have to pay for it.