I’m starting to learn that the perfect bag doesn’t exist—its actually about finding the ‘good enough’ bags out there.

The Lo & Sons Cambridge bag is essentially a a duffel briefcase all loaded with a travel sleeve. Usually when manufacturers try to do too many things at once, it ends up failing spectacularly in their face, but in this case, the Cambridge seems to do everything it wants to do reasonably well. Perfect? Nah.

The fact is, there’s not many options for decent dude weekenders. The options that exist? A lot of mediocre to shitty briefcases, suitcases, and duffles. Though Lo & Sons is more known for its girly bags, its men’s bag line that debuted last year deserves a decent shout even if the Cambridge price tag rings in at a hefty $348. (Lo & Sons does run frequent sales, often bringing prices down significantly. It is suggested to wait for these.)

But the thing that really sets the Cambridge apart is its electronic organization, travel sleeve and shoe compartment, the latter two being rare features found in a weekender. Combined with a curated, GQ-esque aesthetic, it’s going to hit  at least several marks even if it doesn’t hit all of them.

For the sake of relevance (and because I’m a girl), we stuck our London- and Boston-based friend Andy to drive test the Cambridge as much as he could over a six-month period. His only instructions? Please beat the shit out of it and report back.

Base dimensions and characteristics

The bag itself weights 2.2 pounds (1 kg), which doesn’t make it the lightest bag on the market. For most men, though, this shouldn’t pose a significant issue. (It’s clearly different for me as a tiny, 5’3 woman.) It is expected though that the amount of storage and customization adds to this. Duffels are often the lightest, but as a downside there is no structure or form to these bags. The Cambridge is essentially a compromise between an everyday bag and weekender.

How the materials, construction hold up

Bachelor pad this up, yeah? One major complaint is that it doesn’t necessarily look like a premium bag, something to consider with its price point. It’s entirely possible the black version of the bag doesn’t have this problem, but it’s impossible to tell because our only experience is with the navy twill.

There’s an underlying question behind all this: Is this a bag that can go straight from the plane to a meeting? It’s a pretty versatile bag, good enough for most situations. In a formal business situation, though, it’s a tough call depending on the industry, environment, etc. Startups, for sure. Wall Street, maybee.

On the business scale.

Other than that, the craftsmanship is sound and the weather-resistant materials are commendable. It’s made out of a lightweight, 600-denier, waxed poly/cotton/nylon blend that’s designed to be slightly waterproof. In Boston, where it was trekked through rain and snow frequently—awesome Boston for you—it held up fine without issue. 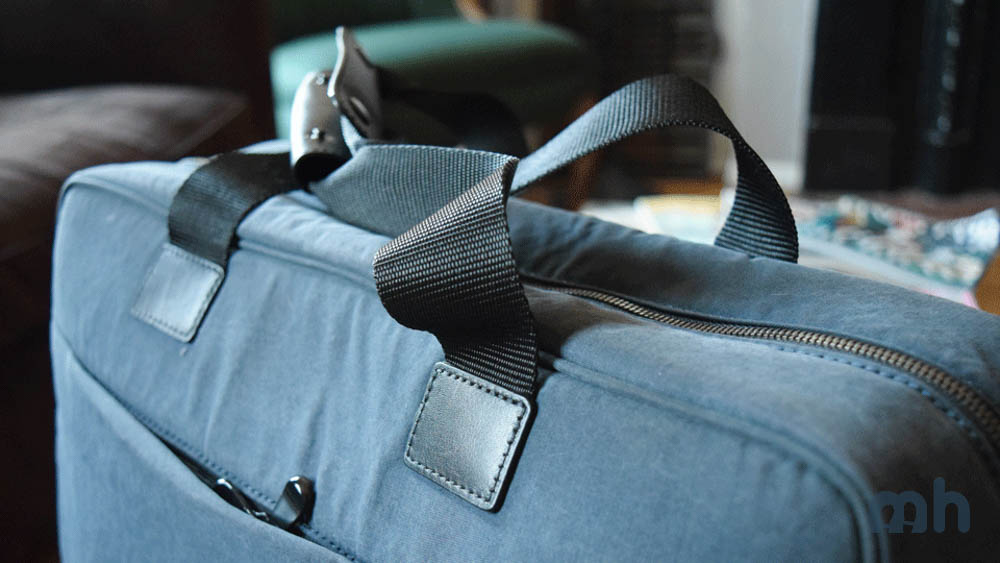 Even the unpadded, detachable luggage straps itself are thick and comfortable, making it good for carrying over the shoulder. The anchor points for the straps are well thought out — there’s no fear of the stitching or straps coming lose. To add some more honey to the pot, there is also some additional leather detailing for a premium feel. In short, it’s very hard to go wrong here.

The main issues seem to revolve around the zipper and the quality of the teeth. There have been a couple of comments about teeth catching from time to time. Likewise the clips that are used for attaching the luggage strap aren’t necessarily the most secure. Once or twice, the clip has loosened and caught, releasing the luggage strap while the bag was being transported en route.

Updated: February 7, 2017About a year after this article’s publication on October 5, 2017, one of the seams busted. There have been comments made throughout this period about the canvas not wearing well, and starting to look beat up. On February 8, 2018, the tester dryly told us, “The Lo & Sons is dead (but is otherwise fine).” The bag’s rating stands.

The Cambridge bag is pretty standard in that it delivers the organization most of the bags in their different lines offer. The inner materials are similar to the poly jacquard lining found in their other bags.

The front pocket has a key lanyard strap, space for two pens, two card slots, internal zip and some open space from some assorted items. So far, the only issue is that the lanyard key strap (see organization) snapped off after two or three months of use. It happened while Andy was balancing the bag on his body, and trying to open the door with the key, which was still attached to the lanyard (he dropped it, the weight of the bag forced it to snap).

Let’s file this away under a case of extreme abuse, though, since the care instructions don’t stipulate for this. (For what it’s worth, I have often done that with the O.M.G. or T.T., but I’ve never dropped it, so it has never snapped.) 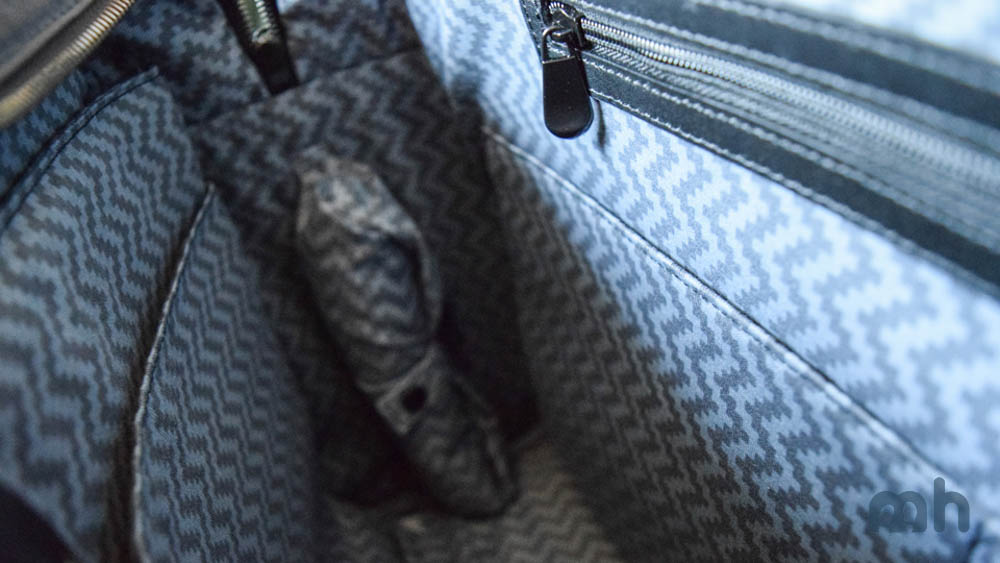 The interior compartment boasts a padded laptop compartment and a pouch for either a tablet or work documents. It is designed for 15” laptops and smaller, though a sleeve for the 13″ Apple Macbook Air was eventually put on it. In theory, it’s great to accommodate so many laptop sizes, but it’s not ideal for electronics to slide around, and these days 15-inch laptops have safely passed over to the dinosaur era when it comes to mainstream laptop sizes.

There’s also a unique shoe/separate/side compartment that will unfurl into the main space of the bag when it’s used. It’s great for keeping things even more separate.

The back luggage strap doubles as external pocket (if the bottom zip is closed) when not in use. As a luggage strap, there have been a couple of comments the width is generally too big for it to fit snugly, but this is pretty easily rectified to make sure its pulling the zips after inserting them on the luggage handle.

Daily usage and packing it up to Cape Cod

The site claims that it is “big enough to serve as an overnighter yet small enough for everyday use.” For the most part, this held true as its main function was as a daily book bag to and from campus (our man Andy here is in grad school).

On short trips to New York City and Cape Cod, it held fine as the main weekender. There is a limit to how much stuff it can contain, though for the most part, it’s not recommended for trips lasting past three to five days. Here’s what Andy has to say about it, more or less: “I could stretch it to five days but only in summer and with the right trip.”

For a trip to Cape Cod, there was more than sufficient space. Here’s a rough estimate of what fit:

Comparing it against other weekenders

The Cambridge is the best hybrid solution we’ve found to date, even if it’s not perfect. It’s trying to balance a lot of the other problems that duffels, backpacks and briefcases have without sacrificing form or function. Its main problem is the small manufacturing defects and some aesthetic issues: given the fact its price point clearly puts it into the premium, upscale range, these should not be problems. (You’re just going to have to overlook it.)

For bang for buck, the Herschel Bowen Travel Duffle is another solid form/function option, though it probably only looks a third as good as the Cambridge does. (It also costs a third of the price. But it’s also not horrible looking.) Though the Cenzo Duffle is a favorite, it is also a more traditional option so can’t really be compared.

Solid weekender and everyday bag. Less so for more formal situations. Lo & Sons is a brand that delivers consistently solid bags, but in general is marred by small production issues here and there. The Cambridge is no exception — hold out for one of Lo & Son’s sales.