Perhaps all the fuss around aluminum suitcases really comes down to is this: How much into status symbols are you?

For the latter half of this year, I've taken it upon myself to road test one of the newest aluminum suitcase entrants on the market. Instead of going into the minute differences between aluminum and polycarbonate, this rundown assumes a pretty decent knowledge of what it is like to travel with polycarbonate suitcases.

For the most part as well, we've found more downsides than advantages traveling with an aluminum suitcase.

In 2018, aluminum suitcases officially become a "thing." Before they were relegated to the frequent flyer crowd obsessed with retaining elite status year after year, but as a luxury item, it's often an item that doesn't add any real benefit.

There's no real need for an aluminum suitcase for 99% of the general population. Being part of the 1% doesn't make you special, it just makes you part of the 1% that needs to haul around expensive technical gear in special protective casing.

In the past, brands like Rimowa and Tumi cornered the market—and owned the dominion—on aluminum suitcases. But in the last few years, brands like Away and Arlo Skye have sought to redefine travel as a status symbol, finally unveiling their own versions for half the cost, turning them into an "accessible luxury" item.

It's no longer about weathering the road; it's about how much you weathered the road. Earlier this year, Quartz stated it quite succinctly:

But let's dig down into the practical concerns if you're thinking about making the switch over to atomic number 13 on the periodic table. Here are some of the core considerations to think about before biting that very expensive bullet.

There is zero give when it comes to overpacking. 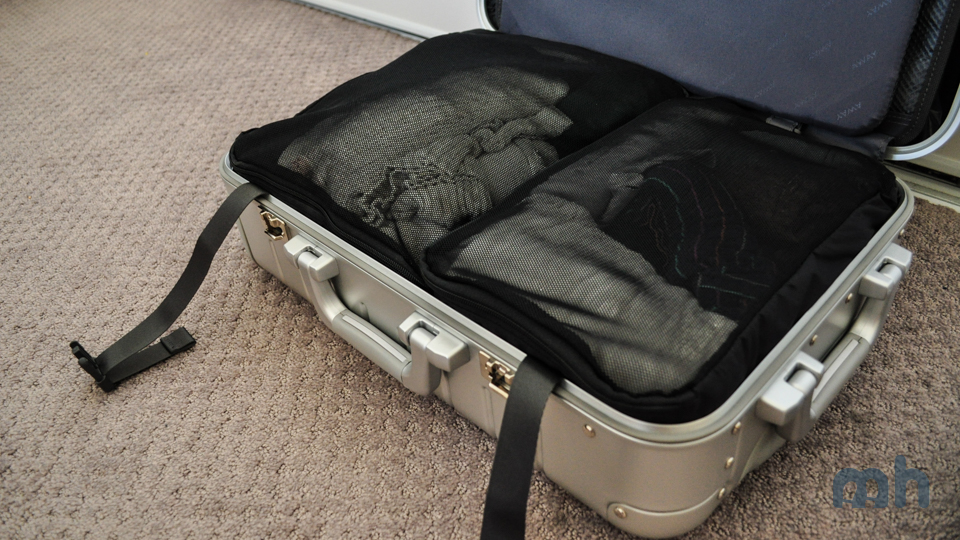 Those straps need to be seriously tucked away.

Softcase suitcases are extremely forgiving when it comes to packing an extra set of clothing, while polycarbonate suitcases are slightly less accommodating but are flexible enough for some give and take.

Aluminum suitcases give absolutely no space to the overpacker to the point that if there is even stray fabric falling out of the shell or around the rim, I know I won’t be able to close it.

Take a minute to realistically gauge your own packing habits. It would be well worth it, instead of finding about $1,000 later that an aluminum suitcase doesn't fit into #traveling+souvenir lifestyle.

On the flip side, this type of suitcase is great for keeping things down to the minimum basics, which somebody may be wont to do anyway, since it will keep the weight down.

The additional weight can turn the overhead bin into a danger zone.

In general, our rule of thumb for the ideal weight of a suitcase lies between five to seven pounds. Light suitcases aren’t able to lend the protection the case needs, and on the opposite side, heavy ones aren’t often as nimble across the floor. (Something about the wheels, and surface area, etc.)

Though it is easy to dismiss the weight difference when a suitcase is empty—I say this as I lift up both an aluminum and polycarbonate1 in each hand side by side—these differences become more noticeable when the suitcase is packed. 😱

Over time, with our own aluminum suitcase, the weight has become more and more pronounced after each trip, and more often than not, I feel weighed down, mentally and physically.2

Ten-minute walks to the airport train seem impossibly long, whereas with a lighter suitcase or a backpack, I would have not hesitated to walk the fairly flat distance in a second.

Enter a bunch of random $5 Uber rides to stupid places. 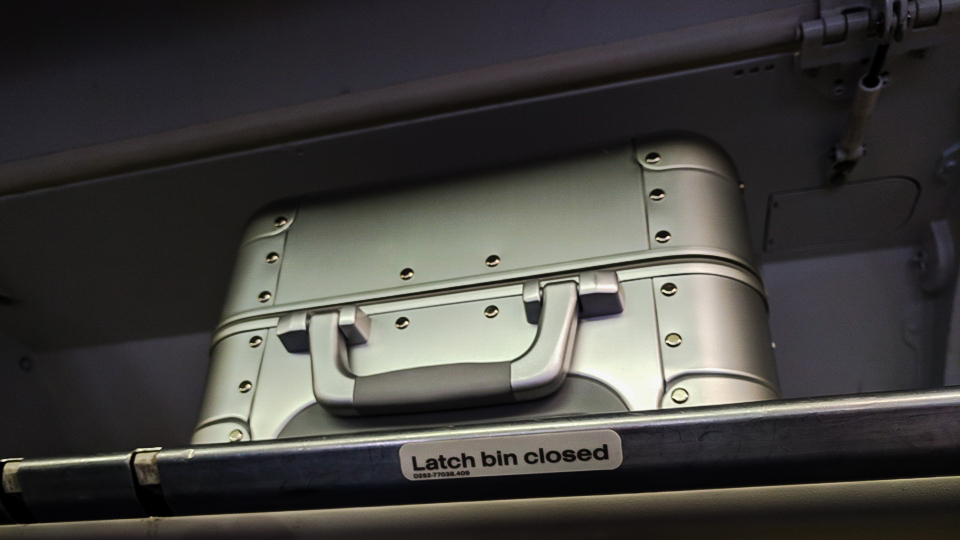 Be prepared to call in the arm strength. (Erica Ho / Map Happy)

This doesn't even begin to consider the additional heft and arm strength it takes to lift a fully packed aluminum suitcase the overhead bin. There have been a few times where if I’m doing it unaided, there's sufficient worry about getting a strong grip as to not drop the suitcase on another passenger’s head. In the arms of someone not strong enough, it becomes a bonafide weapon.

The only reason that we keep opting for it over some of our previous suitcases is because the shell makes it sturdy as hell, and I know nothing is going to break inside. Bringing us to our next point…

Forget about keeping the suitcase pristine.

The beautiful thing about aluminum—as one of the frequent common selling points goes—is that it will weather all those nicks, miles, and wear and tear in a unique, beautiful way. It’s also pretty much the same argument about leather wearing down over time.

But seriously, what is the point of this?

Suitcases are designed for getting beat up. It's not like I can control the beautiful pattern of damage, and polycarbonate suitcases are often better for disguising, and hiding, nicks. There is no hiding on an aluminum suitcase.

In our opinion, this whole argument is completely moot. It's not a pro, nor neither is it a con. 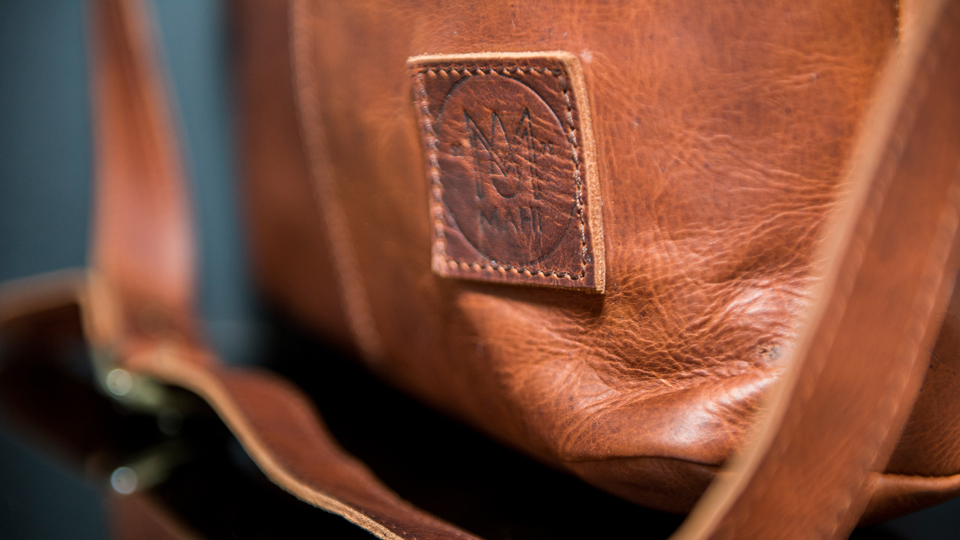 Though its strange to say, perhaps the biggest complaint about the aluminum suitcases is that it constantly made me stand apart from the crowd. For some people, this may be a plus.

It's odd to say, but there are so many reasons why that's a terrible thing. On the plane, it made me look like an entitled elite traveler when I had a (legitimate) complaint and concern for the flight attendant. People stood and turned to look at me.

In the airport, people looked at me when the suitcase accidentally rolled back, due to being so toploaded, as it made a huge thud when it rolled backwards onto its side. THUD.

In different hotels, the staff sometimes looked at me with a different expectation as I rolled my fancy looking suitcase into the reception area. Uber drivers would look at me somewhat quizzically when taking me to the metro station.

More or less, there seemed to be an expectation that I would spend more or tip more because I had the disposable income for a metal suitcase.

For the slightly more adventurous traveler, it flags someone as a possible theft target. For consultants, the added weight is burdensome during those commuter flights.

In our opinion, the aluminum suitcase is the perfect CEO suitcase. It's the kind of thing you want to roll in with when you want to make a statement. But even the best CEOs often like to fly under the radar.

But on the flip side, it will last pretty much forever.

There's only one advantage that we liked about the aluminum suitcase. It does a pretty bang up job of keeping everything inside protected, pun fully intended.

For instance, if we needed a suitcase to withstand the next nuclear war, the aluminum suitcase would probably be one of the front runners. It is probably one of the few suitcases I'd feel OK checking special equipment. (But who would check special, expensive equipment?)

On that particular note as well, special equipment may also not be the best choice for it, since it would also substantially add to the weight. But aluminum suitcases are not particularly unique in this regard.

(Pelican suitcases are known to be a special favorite for some of the professional photographers that we know.)

For one-fifth, and in some cases, one-tenth, of the price, there are plenty of polycarbonate suitcases that are worth their bang for the buck, lasting for hundreds of miles on end.

An aluminum suitcase essentially assumes that the traveler would replace a suitcase five to ten times over the cost of a lifetime to make up for it.

Ultimately, there are more cost-efficient options out there.

How into status symbols are you? The additional weight is not worth it.