Map Happy » Features » The Other Side: When Tourists Invade My Hometown Every Summer

Alisha Steindecker / Map Happy
June 29, 2017   Alisha Steindecker   2 minute read    Culture & Science Features Leisure Opinion
Editor’s NoteMap Happy has always been about perspectives, and in anticipation of Fourth of July weekend, we’re showcasing a piece from staffer Alisha Steindecker, who is a Hamptons native. After all, the escapes are always a reality for someone else.

A few days ago, a man riding the Hampton Jitney from Manhattan asked me, “People actually live here?” Then he added, smirking, “Wow, what’s that like?”

It’s always been bittersweet—the tourists who invade my hometown every Memorial Day weekend and leave right after Labor Day. As kids, my friends and I joked and called them cidiots. But secretly, we appreciated their company. At least I did, but those feelings have since changed.

Every summer, the Hamptons turns from a quaint string of towns, villages and hamlets into a mini-Manhattan. Mercedes and Bentleys line the streets, and the ocean breeze is suddenly inaudible over the shrieking car horns. Twenty-minute drives can take an hour or longer. But many tourists seem to forget there’s a year-round local community out here. People live here, for real.

As a teenager, I’d sit at my hostess perch at a since-closed restaurant in Southampton and people-watch with the staff. We’d admire the tourists’ outfits and their statement cars, though admittedly it all seemed very extra.

For one, the Ferraris would gleam like tinfoil. And as if we should be surprised, they would drive the wrong way down one-way streets and park illegally in the middle of town. Tickets clearly weren’t on their minds, as the rent-a-cop teenagers patrolled the streets with chalk—their marker of choice—to keep track of violations.

But admittedly, the summer season is mostly what allows the local community to stay afloat during the winter. That’s because when people clear out, so does business. Stores close up shop for the season, and so do all the nightclubs. There’s no running into the Kardashians or Paris Hilton, or even former Vice President Joe Biden, a regular at one of Southampton’s restaurants.

Despite this realization, my appreciation for the summer crowd has waned. They fill up our restaurants and stores, but so much of what used to feel like home is gone. The local ice cream shop, arts & supplies store and shoe store have been replaced with a Starbucks, Carvel and Blue Mercury.

Real estate prices have skyrocketed, as demand to have a place in the Hamptons is so high. Land that was bought for $100,000 in the 1980s can be worth millions of dollars more than that now. 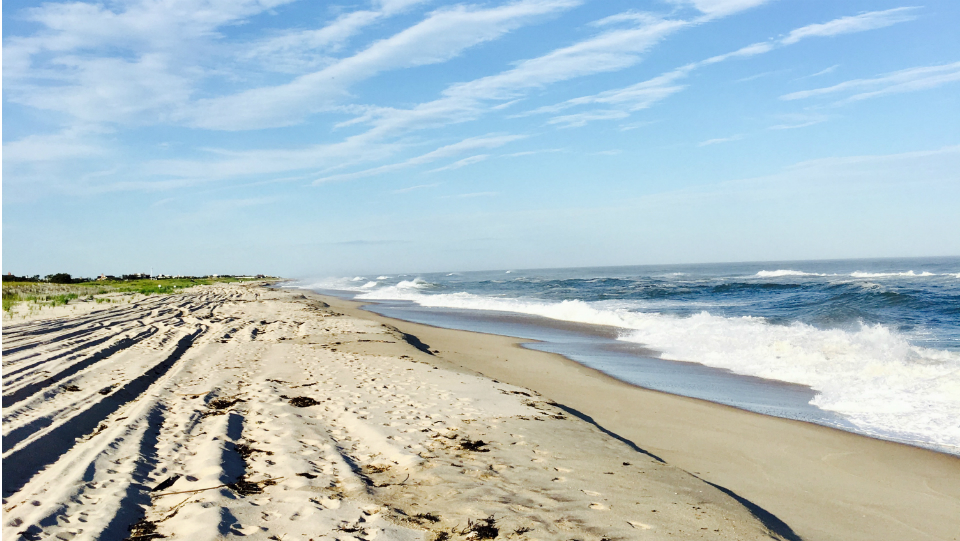 This is what it looks like sans frat boys. (Alisha Steindecker / Map Happy)

But what really gets me is that very few people can afford to stay put in the area anymore. Many close family friends have sold their homes and moved elsewhere in an effort to get more bang for their buck. And those who still do live full-time in the area fear they won’t be able to afford to raise their own kids here.

Local teachers drive in from out of town, and soon volunteer firefighters and EMTs might have to do the same. Last year, the Bridgehampton Gateway project that would’ve allowed for affordable housing fell through after significant community opposition. Though the development had been years in the making, there were fears the opposition stemmed from a NIMBY, or Not In My Backyard, attitude. It was unclear whether that was actually true, and whether those opposing the development were even full-time residents.

Everyone’s heard of Montauk by now. What used to be the least “Hamptons” of them all, and known as the “end of the world,” has turned into a hotspot. On Saturdays in the summer, those beaches are reminiscent of spring break in Cabo, complete with frat boys barbecuing in the sand.

I know this is evolution, don’t get me wrong. Things change. But it would be nice if those invading our towns knew that this is actually a community outside the summer months, and just how different it is. For example, in 2015-2016, 36 percent of the students at Southampton School District were eligible for free lunch; in Hampton Bays, 47 percent were; in East Hampton, 30 percent were; and in Sag Harbor, 14 percent were. 1

That’s a far cry from the moneyed $600 helicopter flights to bypass traffic going east on the expressway. And that extra noise is most definitely not welcome.

I always thought tourists came to the Hamptons to escape city life: to relax by the beach, take in the fresh air and decompress. As it turns out, they only bring the city with them.

Thinking about vacationing in the Hamptons? This is one perspective from the opposite side.