There are travel gadgets, and then there are gadgets that are… gadgets. But are great for making being on the road feel slightly less lonely.

The UE Wonderboom is one of these things. If you really think about it, almost any Bluetooth or portable speaker would work well. But the UE Wonderboom strikes a balance between performance and portability, and is versatile enough for full-time use at home at $68 to make this worth the cost. It would have a place in any home, which is what makes it so great for the road.

Between the UE Wonderboom and its previous iteration, the UE Roll 2, there is no contest. Though both products retail for $99, Amazon has the Wonderboom ($68) and Roll 2 ($70) for significantly less. Its clear that UE has taken steps to fix whatever made us lukewarm on its portable speakers in the past.

Delivering on the technical specs (it does boom).

The UE speakers may be some of the most user-friendly speakers around; the Wonderboom is no exception. Functionally, there is a power button and small indicator to pair via Bluetooth on the top of the speaker. The UE logo itself provides play, pause, and skip functionality, and is also used for linking to another speaker (more on that later).

There are also +/- buttons on the side that control the volume.

In particular, the Wonderboom goes up to 86 decibels (as loud as a passing diesel truck), proving plenty loud in a 2,200-square-foot space. The sound isn’t going to come through on different floors, but let’s not piss off everyone in the house, shall we? In the three months we’ve played around with the device, our staff encountered absolutely zero problems with range. The official mobile range for playback is up to 33 meters (or 100 feet).

The speaker really delivers solidly on the bass, an upgrade from the previous Roll 2. Though the mids aren’t the crispest we’ve heard, it delivers smooth sound that would be able to please most, sans pure, extremist audiophiles. In particular, SoundGuys has a great review focusing on that. Ours is more geared on how it packs for the road.

The speaker is also able to pair up to eight devices, though it can only connect to two speakers at the max from a single source.

The lithium ion battery can also deliver up to 10 hours of playback per charge. In real-time use, this has differed and its become quite evident that there is a clear relationship between its volume and battery life. Other users have reported up to 6 hours at its highest setting, and this was fairly consistent with our own findings. 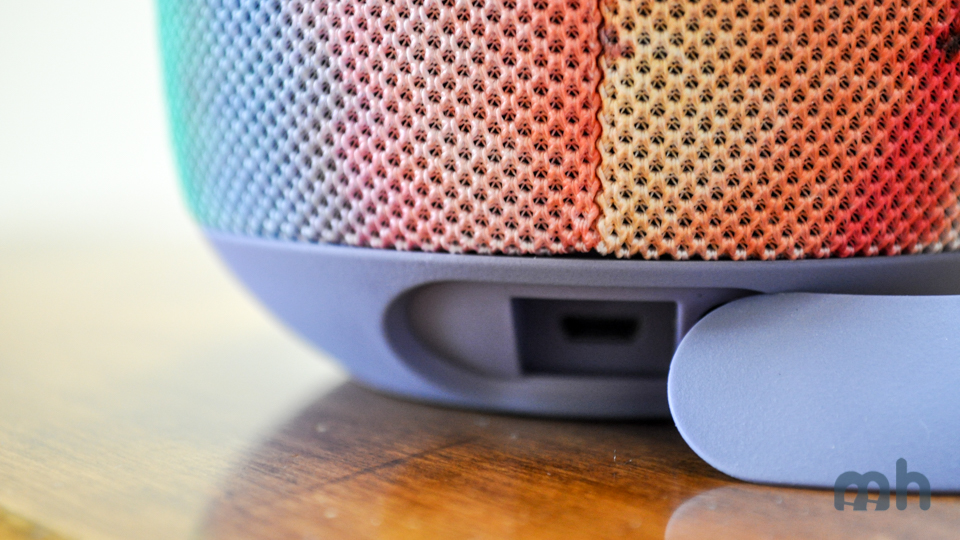 Micro USB charging is protected by a flap.

Charging is pretty standard, with a micro USB plug and cable included for it. The port itself is covered by a rubberized flap for protection.

Even though the manufacturer states the estimated charging time for the speaker is about 2.8 hrs, we found that 4.5 hours was more consistent with our experience. However, this can also be variable depending on what amp voltage the speaker is being charged at. More or less, if we hadn’t been timing things for the purpose of this review, it would have been unlikely we would have noticed most of these things.

In particular, one of the biggest downsides is that there simply is no indicator for remaining battery and/or the current battery level for the speaker.

Personally, this is a speaker we don’t mind throwing around.

There’s those technical things, but what we really sets this speaker apart is the physical ruggedness of the device. In keeping with UE tradition, this is a speaker that we don’t worry about messing up. I’d play hot potato with this speaker.

I’d even roll it across the floor for fun.

The speaker is made out of the same rubberized casing all other UE products are composed from. The company declined on elaborating further about the special proprietary blend of materials —  pure evidence in our minds that the company is well aware this is something that this is a key differentiator from its competitors.

For traveling, its ability to withstand physical stress is nearly paramount. It endured almost every situation we put it through with ease, from train to beach. (It does have a 2-year warranty.) 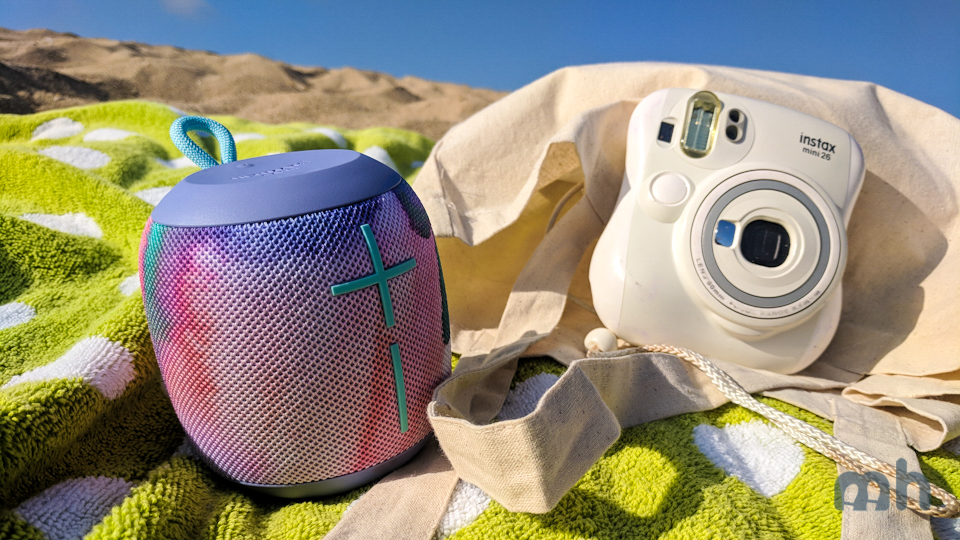 Rated IPX7, the Wonderboom is also slightly waterproof, meaning it as waterproof as waterproof devices get, which truthfully, is not that very waterproof. This isn’t a device that is supposed to be sitting at the bottom of the bathtub endlessly (though it is actually ideal for shower music), but it will float to the top when confronted with a body of water.

The Wonderboom is only able to withstand being immersed in 1 meter, or 3 feet, of water for up to 30 minutes. More or less, the point here is that it’s not supposed to send you into a blind panic when you accidentally knock it into the water or into the pool.

Like their adult cousins, the large UE Booms, the UE Wonderboom is also able to pair with other Wonderbooms for increased sound. The maximum limit seems to be hooking two speakers up to a single source.

Quite succinctly, in order to pair both speakers, each speaker should be individually paired with the source device.  Once that’s done, the top button must be pressed on both speakers simultaneously to link them, or otherwise the music will only play on the one connected device.

Here’s how to pair both speakers.

The speakers will automatically disconnect from each other once each speaker is turned off.

Packing the UE Wonderboom for occasions.

Particularly in this iteration, UE finally gets its portable devices back on track. The UE Wonderboom’s squarish form factor is markedly improved over the previous UE Roll 2. Though it has a somewhat larger footprint, it leaves less negative space in a travel packing system that utilizes packing cubes and pouches.

In contrast, the UE Roll 2’s CD-like shape, which might have been a vintage-like nod to the Walkman and Say Anything-era (John Cusack!), was wholly impractical. Its odd shape often created a lot of negative space that was often awkward and hard to fill.

In terms of capacity, the UE Wonderboom packs almost exactly under one liter (>1 L). This makes gauging remaining packing space significantly easier, if a bag’s capacity is known. For example, Away’s Everywhere Bag clocks in at 20 L, meaning that it’s probably quite possible to fit 20 UE Wonderbooms inside.

But, like, I need to wear clothes on a trip.

(This should be our new method for measuring a bag’s capacity. Exactly how many UE Wonderbooms fit inside a bag? How many licks does it take to get inside the center of a Tootsie Pop roll?)

The UE Wonderboom is great for traveling, delivering smooth, powerful sound in a compact package. It also packs well in an an organized travel system with its form factor and has a measured capacity, allowing travelers to gauge remaining bag space, unlike its predecessor.