There was only three things Geraldine Mock wanted to do in her life: ride an elephant, fly around the world, and ride a camel. The only thing she didn’t complete was to ride an elephant.

Isn’t it curious the woman who accomplished the feat is less well-known than the woman that first attempted it?

Bring up Amelia Earhart, and everyone knows the heroine that mysteriously disappeared over the Pacific Ocean. To this day, it’s unclear how much of Earhart’s legacy comes from her accomplishments, or from her unknown fate, but it wouldn’t be a full 27 years later that Geraldine Mock, a “housewife” in Columbus, Ohio, completed what Earhart originally set out to do.

It would be easy to get lost in the record (Mock flew in a Cessna 180 now on display at the Smithsonian’s National Air and Space Museum), or wonder why we simply never hear about her, but it belies a more interesting story about a woman that turned an extraordinary event into an ordinary event, perhaps defining what true heroes do.

(It is interesting to note that Mock was roughly the same age, 38, as Earhart when the aviator disappeared at the age of 39, proof that it’s never quite too late for anything.) 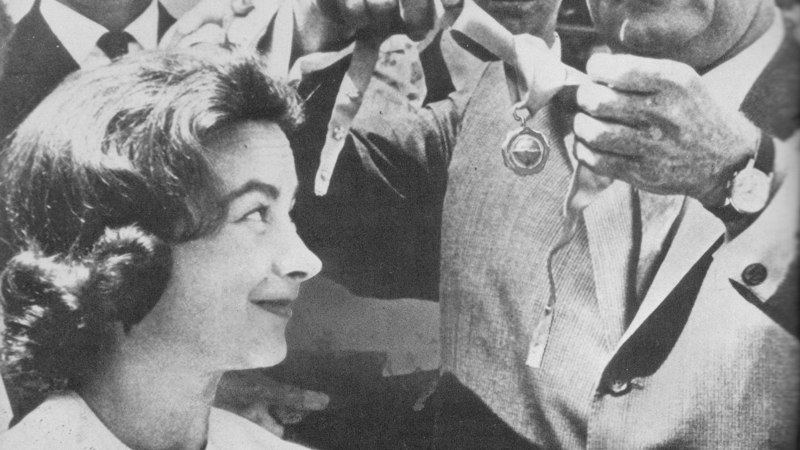 Mock receives the Presidential Medal of Freedom from Lyndon B. Johnson.

[Special thanks to Rita J. Pike, her granddaughter, for sharing stories and photos, and letting us learn a little bit more about the woman behind the flight. ]

Behind the inspiration for the journey

Mock had already quite decisively, from the early age of seven, concluded she would fly around the world, five years before Earhart’s fateful journey. Earhart was one of Mock’s heroes, and it became fixed in Mock’s mind the moment she went up in an airplane for the very first time.

Born Geraldine Freditz, “Jerrie” was besieged with a strong sense of self from birth. The eldest of three sisters, she flew through most conventions, becoming the only woman in her aviation engineering class at Ohio State University. It was there where Mock met her husband, Russell, who would later play an integral role,1 marrying him at the age of 19.

(Interesting note: Orville and Wilbur Wright, the forefathers of the modern airplane, hailed from Dayton, Ohio, just one hour or so from Mock’s hometown. It would seem Ohio is steeped in aviation history, though the first flight was made at Kitty Hawk, North Carolina.)

Mock also became a television producer while rearing three children, at a time the nascent industry was only finding its footing. Her show, Youth Has Its Say, was the first television program dedicated to allowing children to voice their opinions; four years after her flight, Mister Roger’s Neighborhood would make its culturally defining debut. 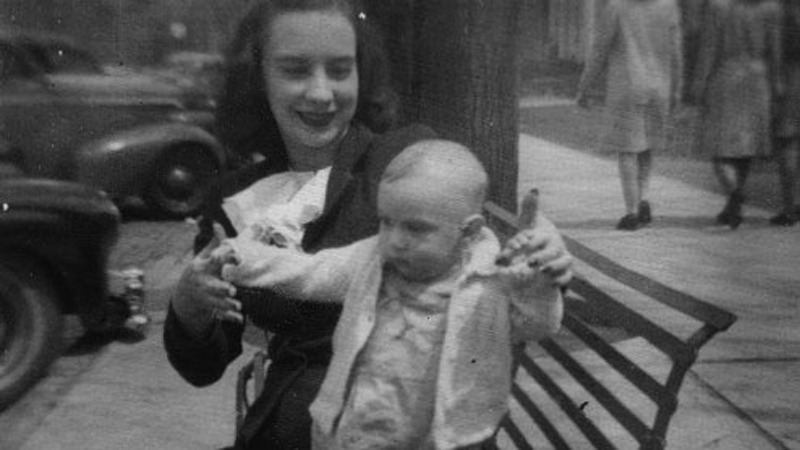 Mock with her eldest son, Robert.

But the turning point came one day around the dinner table—she was an extraordinary cook by all accounts—when busy extolling on the world, her husband exclaimed somewhat exasperated, if she was really that bored, perhaps she should just fly around the world. (Clearly, Mock’s response, was to the effect of, “So, I will!”)

(Both were licensed pilots, so this wasn’t that weird. Mock had received her license a few years prior, at the age of 32. There was little, if any, resistance to Mock’s declaration, precisely because the people close to her knew the futility of convincing her otherwise.)

Mock’s two eldest children had hit teenagerdom while the youngest, Valerie, was barely weaned. Russell would stay at home to take care of three year-old Valerie while Mock made her trip around the world.

The logistical nightmare of flying during the Cold War

This would not be a solo effort. Russell, her husband, an advertising executive, began lining up sponsors over the larger part of a year. Mock’s flight wasn’t without fanfare, either; there was a perceived race with another female pilot, Joan Merriam Smith, who later replicated the same date and flight path as Earhart. (Smith finished the flight 25 days after Mock, but died the following year in a plane crash.)

But, this being the Cold War era and all, compounded with restricted airspace, meant Mock would have to enlist the U.S. Air Force in order to help with the logistics. It wasn’t as simple as stopping off whenever the plane ran out of fuel; there were many parts of the world where things could, and would, get a bit more complicated.

[The small Cessna also had to be retrofitted for a fuel tank to to go inside the plane–typically, the fuel was stored in the wing–but for a single-engine plane to make the journey and to last for longer legs, there had to be adjustments. Three of the four seats had to be removed in order to do this.] 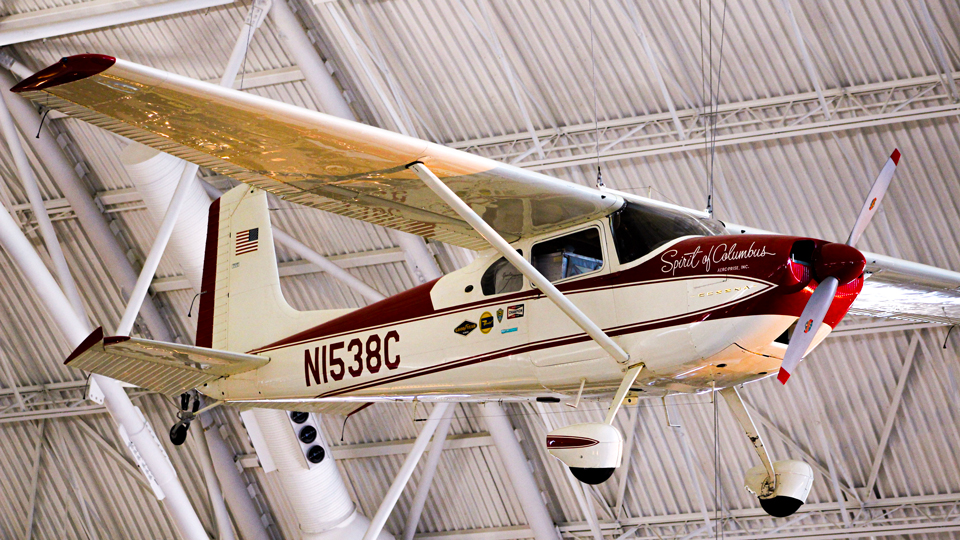 Mock’s Cessna now on display in the Smithsonian.

Though a planned route was essential, in addition to clearing foreign sanctions and obtaining permission to land, Mock would inevitably go slightly off course during the course of the journey as things changed.

Asia would prove the trickiest, since most of the airspace in and around China was illegal. Mock later reminisced about Vietnam, saying “Somewhere not far away a war was being fought, but from the sky above, all looked peaceful.”

(She ended up stopping in Pakistan, India, Thailand, and the Philippines.)

Mock’s journey across the world (and the Middle East)

During the trip, Mock stopped in 11 different countries — not including the U.S. or any U.S. territories. Throughout her lifetime, Mock traveled to 51 countries in total.

The flight was just a way for her to see the world. Mock would later recall the “…indescribable peace, the beauty of clouds glowing gold at sunrise,” pinching herself at the sight of the stars, in the midst of radio failures and stormy conditions that threatened to derail the journey at multiple points.

In preparation, Mock didn’t pack all that much for the month: Two outfits, two pairs of shoes, and a “portable” typewriter, basically the 1950s version of packing a laptop, made it on the plane.

(Mock wrote stories throughout the trip, sending them back home to Columbus Evening Dispatch as part of a sponsorship agreement.)

This consisted of her flying outfit, a blue skirt and jacket, a quick-drying blouse, a pair of slacks, and a pair of high heels and sandals. Basically, anyone interested in packing light probably should take serious inspiration, because if she can do it, you can do it.

[This flight map was recreated from the ArcGIS map by David Starr in collaboration with the Licking County Planning Commission.]

On the trip, when she wasn’t afraid of getting shot down in the Pacific Ocean, Mock was the toast of the town. In Casablanca, she was hosted and dined by the president of the Aero Club of Morocco. These were some of her fondest memories, and she’d later often reminisce about the sights, sounds and food.

In Saudi Arabia, she was greeted by a crowd of onlookers that stood in disbelief when they realized she hadn’t been accompanied by anyone (or, specifically, by a man). In fact, once this was confirmed, she was then paraded around with an ovation of applause.

(Back then, the Middle East was still relatively progressive; Mock would have to later reconcile the political changes with her own recollections.)

Meanwhile, her husband, Russell, was constantly riding her throughout the flight to get home. From personal interviews with her family, Mock would have preferred to take her sweet time! He reportedly canceled a luau in Hawaii because he thought she’d need the sleep.

There was a title at stake, though Mock didn’t seem to prioritize it all. She took off for her flight just two days after Smith departed for her flight around the world, and though Smith wouldn’t complete the flight until significantly later, there was definitely an ominous ticking clock to see who would finish first.

Eschewing the limelight in favor of personal pursuits

For all of Mock’s accomplishments, Mock didn’t like being defined by a single thing—in her mind’s eye, her gender was irrelevant. It only mattered to her that she was a person pursuing her passions and interests, unhindered and free.

As a result, she consistently shied away from the public eye. According to her granddaughter, she was often recalcitrant to participate in pomp and circumstance, though she would occasionally participated what was required.

For a brief time in 1969, Mock also became involved with the Flying Padres, otherwise known as the National Association of Priest Pilots,2 and flew out to Papua New Guinea working with leper colonies and underprivileged children. She decided to donate the plane to the cause, after, of course, breaking many speed records en route.

This was to be the last flight for Mock, as flying had gotten too expensive. There were sponsors and prize taxes that needed to be paid. 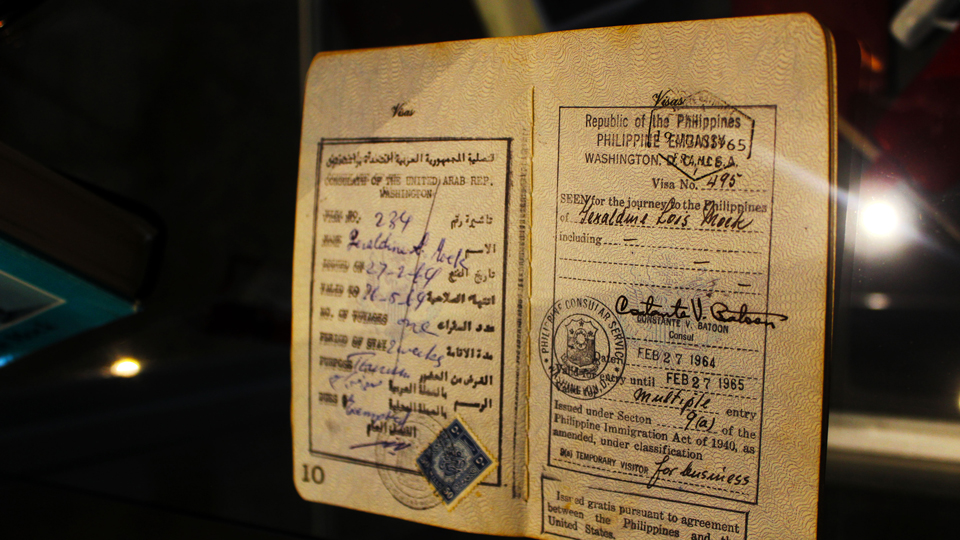 For the legacy she left, Pike recalls not recognizing the enormity of her grandmother’s accomplishment until many years later, when she reached early adulthood. For Mock, it wasn’t a defining moment, but simply an adventure out of a series of many adventures.

Mock passed away in 2014, a few months after the 50th anniversary of the flight. Though she often shied away from the limelight, she did speak briefly to BuzzFeed on the milestone.

These are Mock’s official world records, as recognized by the National Aeronautic Association and the Fédération Aéronautique Internationale.3

But by now, you know, these were the least important things she did.

BuzzFeed, "How An Ohio Housewife Flew Around The World, Made History, And Was Then Forgotten"
Jerrie Mock, Three-Eight Charlie

It wouldn't be a full 27 years later that Geraldine Mock, a “housewife” in Columbus, Ohio, completed what Earhart originally set out to do, becoming the first woman to fly around the world.

This is the story behind the woman, and perhaps why we don't hear much about her as we should.