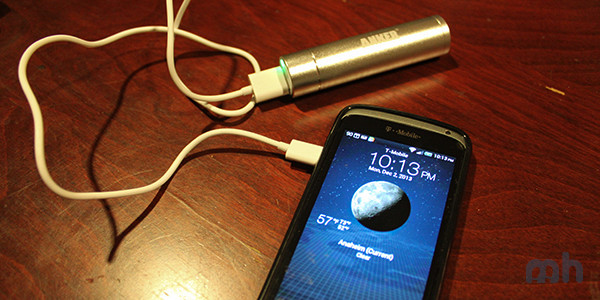 Imagine my surprise one birthday when my ex presented me with an external portable battery. Little did I know that it would only be the first of many external batteries in my life. (And boyfriends.)

Apparently, nothing turns a girl on like keeping her gadgets turned on. Though I would have preferred something slightly more memorable coughjewelrycough to celebrate the occasion, I eventually learned to appreciate the initial sentiment of keeping my Kindle, Android and iGadgets powered up. It was practical, I suppose.

Over time, though, the pricey Innergie PocketCell that I received eventually wormed its way into my heart. It was great keeping for my music going on 14-hour flights where I was stuck 35,000 feet up in the air without an energy source. It kept my GPS going on while I roamed unknown streets in countless rental cars. It kept the time while I trudged through New York’s subways. That was, until I lost it.

I wasn't exactly eager to snap it up considering the PocketCell retailed for $45, so I began looking for a more budget-friendly replacement. Enter the “lipstick-sized” Anker Astro Mini External Battery which retails for $19.99 + tax on Amazon, though I managed to pick it up for slightly less at $15.99. Measuring at 3.5 in x 0.9 in x 0.9 in (89 mm x 23 mm x 23 mm), it was comparable enough in size to the former that I decided to at least try it out as a replacement.

Though it resembles a lipstick tube, that’s really about the closest the Astro Mini gets to an actual tube. It’s about an inch (2.54 cm) higher than most lipstick tubes; and when it comes to weight, it doesn’t even hold a candle. The average tube of lipstick averages about .2 ounces (.57 grams) while the Astro Mini weigh in about 2.7 ounces (76.54 grams). This makes it about 13.5 times heavier than a lipstick tube, but if you compare this against the infinitely more expensive Innergie PocketCell at 2.6 ounces (73.77 grams), you should realize that this is right in line with other smaller external batteries on the market. 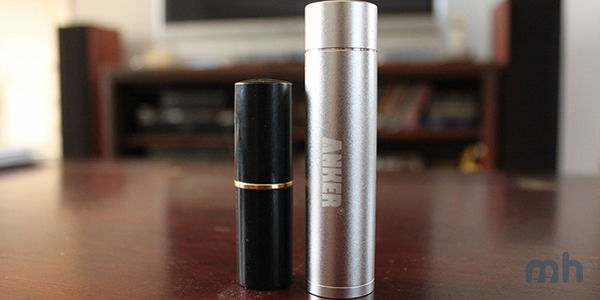 It also comes with a carrying case that easily fits both the battery and its accompanying microUSB cord. The microUSB cord is perfect for connecting Android devices but won't allow connections to iDevices, so be prepared to carry around your stock Apple cord if you plan on charging your iPad or iPhone. Comparatively, the PocketCell comes without a case, which makes it hard from getting it scratched up or protecting the cord. Its cord, though, allows for three types of connections, making it easier to use with multiple devices. (It even works with Apple products, with the exceptions being the iPhone 5 and the 5s.)

If you have a standard AC adapter—which isn’t included—it’s possible to charge the portable battery itself through an outlet using the microUSB cord. Anker suggests that it takes about 3 to 4 hours to charge using a typical AC 0.8A adapter. To test this spec, we used a standard Apple iPhone charger to recharge the battery. The Apple 5W USB Power Adapter clocks in at 1A, so we expected it to hold up to Anker’s estimates. Instead, it actually took a full 4 hours and 26 minutes to charge, running over the suggested amount of time. While this wasn’t a huge discrepancy, it was slightly disappointing.

For our first discharge test, I decided to test how long it would take to charge an HTC One S, a relatively recent high-end smartphone. The phone carries a battery capacity of 1650 mAh while the Astro Mini keeps a capacity of 3000 mAh. To be exact, after figuring in the capacities of both batteries, I expected to receive somewhere close to 1.81 charges, if not something similar.

I drained the phone down to 8% before I plugged in the Astro Mini. On its lowest brightness setting, I also made sure to kill any extraneous apps that would drain its battery. It took about 3 hours, 11 minutes and 6 seconds to charge the phone up to 96%. Curiously, towards the end of the charge, the recharge speed seemed to drop off significantly, and showed very little progress of completing before I decided to finally kill the process.

I then dropped the phone to 18% and then plugged the Astro Mini in till it finished at 31%. It only managed to squeeze out an extra 13% in 23 minutes and 26 seconds before it went to kaput. This means barring the battery power it took to ran the phone, the Astro Mini only managed to output 101% over 214 minutes (some 3.5 hours) over one charge before dying completely. This was far less than I estimated, so I decided to take it for a second run.

The second test involved recharging a completely dead HTC One S, which provided the Anker the best but also the least realistic charging conditions. I went ahead and recharged it for a second go. Still, it ended up taking 3 hours, 19 minutes and 44 seconds before the phone topped off completely. Using the remaining battery on the Astro Mini, I stuck it in a completely now-dead phone again. This time, it only lasted for 19 minutes and 17 seconds and only refilled the phone’s battery up to 35%. In optimum testing conditions, the external battery ended up giving me 135% over 219 minutes (some 3.65 hours), which was very consistent with its poor results from the first full discharge test.

Disappointing, no? Well, it turns out that Anker left out a very important note, shuckered deep within the device’s instruction manual that should be ideally stickered on top of the box:

During the charging process, approximately 30% of external battery's total capacity will be consumed, including power lost from circuit heat and voltage conversion...

Well, I’ll be. So I should really just expect it to give me the capacity of a 2,100 mAh battery? That changes the game considerably: using that spec, in reality we should only expect the Astro Mini to produce about 1.27 charges. This fell well within our actual findings, which ranged anywhere from 1.01 to 1.35 charges.

Look, the Astro Mini seems like it would give you enough juice so that you can run through the day—maybe even for two days—nonstop on your phone if you’re not relying on it as your primary charging source. For day and weekend trips, this is probably a good source of backup power. Obviously, though, for longer trips, it’s not going to work well.

Though I’m mostly satisfied with the Astro Mini given its price point, it didn’t quite reach my expectations with its long leading charge time and actual capacity. While I wasn’t expecting miracles, I was expecting something that would at least amount to more than one complete charge on my Android phone. The Innergie PocketCell often gave me close to two full charges, though suffered from some other design flaws. To boot, it’s also twice as expensive.

The Astro Mini, though it doesn't live up to its technical specifications, is cost-efficient and practical. Just don’t expect the world out of it. It does what it’s supposed to do, and that is to give you emergency power and nothing more. 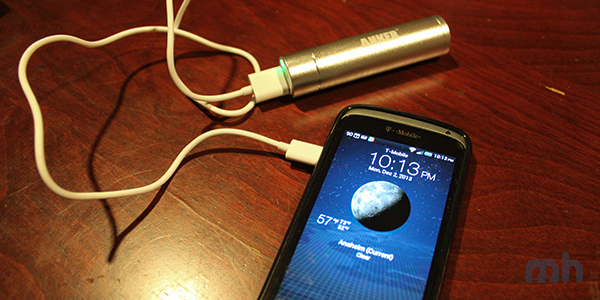